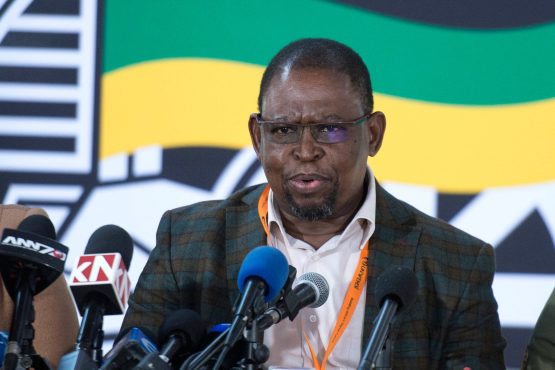 Big-ticket items that would place pressure on state finances included spending R10 billion on a state bank, Godongwana, who also serves as the ANC’s head of economic transformation, said in a presentation that was delivered to a September 4-6 party meeting and seen by Bloomberg. The government will also have to come up with R19.6 billion for increases for state workers, possibly by cutting jobs, and need R4.6 billion to forgive unpaid highway tolls in the central Gauteng province, he said.

While the ANC is preparing for local government elections on November 1 and needs to show it is doing more to address rampant poverty and record unemployment, it has little room to maneuver as the government contends with surging national debt and limited investment.

New projects “will require prioritisation and trade offs,” Godongwana said. “Our fiscal capacity –- as measured by the variation of own tax revenue as a percentage of domestic output –- has been deteriorating.”

The finance chief also cautioned that the state arms company and agricultural bank will need R8.2 billion of bailouts, while R15 billion will be needed to forgive student debt and R16 billion for bail outs for provinces that haven’t paid their bills.

The government has already committed to spending R38.5 billion to respond to the ongoing impact of the coronavirus pandemic and a recent spate of riots and rampant looting that left 354 people dead — money that wasn’t previously budgeted for. Plans to institute a credit-guarantee scheme to support businesses have yet to be properly costed, although the price tag was initially pegged at R5 billion, the finance minister said.

Pule Mabe, the ANC’s spokesman, wasn’t immediately able to comment when called and didn’t respond to a text message.

Godongwana cautioned against forgiving road toll debt, saying the “request has serious long-term consequences if the user-pay principle is rejected.”

The finance minister called for significant economic reforms to be implemented before President Cyril Ramaphosa presents his state-of the nation address in February.

Just do the basics:
a) ensuring all municipalities achieve clean audits
b) no existing projects are completed on time within budget
c) SOE that require bailouts are liquidated or sold
d) the state focus on creating laws and enforcing them for the benefit of both business and society
e) reduce government employee numbers.

“Announcing an overhaul of the way work permits are processed to address a skills shortage.”

Add…. Get rid of BEE and the UNIONs … We need a flexible labour market for South Africans…

There is plenty of skill in SA… PLENTY…. STOP IMPORTING LABOUR.

I agree with your points, but would add that government should foster the conditions for business to create employment. Government cannot be the employer to all of the unemployed masses, but by creating the conditions that make it easy for businesses to operate busineses will do a much better job of absorbing unemployed people that have the necessary skills they require.

Hmmmmm. This is real rocket science!!!

“Our fiscal capacity –- as measured by the variation of own tax revenue as a percentage of domestic output –- has been deteriorating.”

I am all for the user-pays principle. I’d happily only pay for the services I use. So I expect a huge reduction in my taxes, by as much as 80%, because I don’t use the regime’s pathetic policing, healthcare or education “services”.

SA is a country of “equality of outcome”, the anc does not care about equality income, for them that is just an unnecessary process to start as it requires both effort and grey matter (brain power).

They will take what you have an “Redistribute” it.

The government is better of giving out a UBI to all SA over the age of 18 and closing all government services and social grants whilst only keeping the Police; Army; Government Administration.
Given our current tax generation of about R1.5Tril – Law & Order and Administration, R1.25Tril divided by 40million people = R2,604.00 per person per month.

I wonder how the ANC will find funding for all this. THERE IS ABSOLUTELY NO DOUBT THEY WILL RAISE TAXES to fill in the shortfall. But with a shrinking tax base and resistance growing amongst tax payers, it is unlikely they will meet their targets. More taxes levied does not result in more taxes paid…. especially not that ordinary South Africans are hurting.

They going to suck the life out of every Capable working individual that is still left… Thats their biggest asset which they treat like manure.

Efficiency in usage of funds is needed.
But the Cadres don’t think about efficiency…. there is only one thing on a cadres mind and that is to spend

Taxes above 50%…. I will not work. Full Stop. No incentive to work.

Maddest of all is that the biggest employer in SA is “government”. Increase tax and these employees, paid by tax, will demand an increase and round and round we go; trying to pick ourselves up by our bootlaces meanwhile they have been stolen by the ANC. Zero sum game.

Crash and burn Godongwana, and take your cANCer masters with you. Pull a niehaus for us with the rest of your despicable gang included.

Eventually with a lot of vulcanism and earthquakes, Gondwanaland broke up into separate landmasses.

Like Tito, is Godongwana going to have to battle on his own?

A billion here, a billion there … before you know it, you’re talking real money. Sigh …

REDUCE EXPENDITURE!!! We have 16 million people on social grants, free health care, free school education, free university education and free RDP houses. Add to that free electricity, free water and free refuse collection because people simply don’t pay. Then there is a gigantic parliament with 400 members (for 59m people and the USA 460 for 330m people), a bloated cabinet of 28, hundreds of traditional leaders and 2,1 million civil servants which to a large extent, does very little. It is not that the income is too little- the expenditure is simply too much.

Oh, what a drama Queen! The socialists have a large pool of capital to exploit for their looting spree. “They owe the debt to themselves”, considering that the members of the Tripartite Alliance hold the government debt through their pension funds. These clueless socialist clowns are lending their own money to the government to finance their own salaries. The ANC economy is a game of musical chairs, and the music is still playing…..