Slowly but not surely, the world economy is emerging from its coronavirus-enforced hibernation.

As governments ease lockdowns of businesses and allow consumers to travel and shop again, measures of high-frequency data and confidence increasingly suggest a bottom has been reached in the worst global recession since the Great Depression.

A new set of daily activity gauges from Bloomberg Economics finds almost all of the economies it monitors witnessed a pick-up in activity since late March and early April, although no country is yet approaching its pre-virus levels. Germany, Japan and France are among those rebounding the fastest, while Spain and the UK remain relatively weak.

A legacy of higher unemployment, bankruptcies and health fears also means recoveries are likely to be slow and sluggish after an initial bounce, with a full rebound unlikely before the discovery of a vaccine. The risk remains that the deadly virus could spike again, forcing constraints to be slapped back on.

“The picture is generally getting better, but it is a slow crawl out,” Deutsche Bank Securities Chief Economist Torsten Slok told Bloomberg Television. “We are standing at the bottom of the canyon and looking up.”

Policy makers are working to add momentum to the climb back with yet more economic stimulus. Japan on Wednesday announced more than $1 trillion of extra help for households and businesses, while the European Commission unveiled a package worth as much 750 billion euros ($823 billion) to help the continent’s worst-hit economies.

Investors, for their part, are showing signs of confidence. Asian stocks mostly climbed with US and European futures Thursday as investors weighed continued signs of economies reopening against the increase in Sino-American tensions over Hong Kong.

In China, which was the original epicentre of the virus, the earliest indicators for May suggest its recovery is continuing. Official purchasing managers’ indexes should show the recovery making more headway, with the services sector probably continuing to rebound at a robust pace, according to Bloomberg Economics. Asia’s policy makers continue to add stimulus to counter concerns in export-oriented economies that the blow to global demand will weigh on their outlooks. The Bank of Korea cut its key interest rate to a record low on Thursday.

Among the trade engines in Asia, signs that manufacturing is improving haven’t yet been accompanied by a pickup in services. South Korea’s first 20-day export orders showed mild improvement in May, while still in double-digit decline, while export orders for Taiwan in April grew for a second month.

Those figures from Korea and Taiwan are favourite early indicators for Shaun Roache, Asia-Pacific chief economist at S&P Global Ratings in Singapore. He says “global demand for tech is proving quite robust,” while services data “are still weak almost everywhere.”

In India, where the world’s biggest lockdown threatens to push 12 million into extreme poverty, there may be glimmers of hope in high-frequency figures. A basket of such indicators, including traffic congestion, electricity demand, and employment, point to a “modest lift off lows,” Radhika Rao, an economist at DBS Group Holdings Ltd. in Singapore, said in a report Thursday.

US High Frequency Data Dashboard
In the US, some green shoots are evident with most indicators on Bloomberg Economics latest weekly dashboard of high-frequency, alternative and market-based data showing slight but steady improvement from distressing levels. Those include filings for unemployment benefits, mortgage applications and travel by air and public transit. Air travel and table booking in restaurants are also picking up, albeit they are still far below their peaks.

Some monthly data are also exhibiting signs of steadying or edging up. New-home sales in the US unexpectedly increased in April, while consumer confidence as measured by the Conference Board stabilised in May after a sharp decline the previous month. 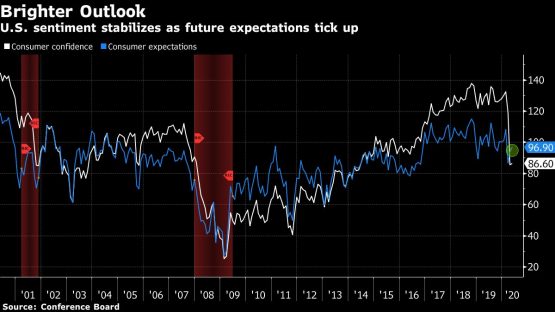 “The US economy appears set to turn the corner on the Covid-19 recession as businesses quickly reopen across the country,” said Mark Zandi, chief economist for Moody’s Analytics.

At the end of last week, 575 counties, accounting for about 13% of the US gross domestic product, were still locked down, according to Zandi. That’s down from a peak of 2,600 counties — with nearly 30% of GDP — at the end of April.

“Maybe we’re near the bottom in terms of the economic downturn and hopefully we’ll start seeing improvement in coming months,” Federal Reserve Bank of New York President John Williams said in a May 27 Bloomberg Television interview. “I expect to see a pretty significant rebound in the second half of this year.”

If the recovery does take hold in June, it would mark the US downturn as perhaps the shortest recession in records going back to 1854, but among the most severe. The unemployment rate more than tripled in April to 14.7%, the highest since the Great Depression, as employers cut an unprecedented 20.5 million jobs. A further rise in joblessness is expected this month.

“While the decline in confidence appears to have stopped for the moment, the uneven path to recovery and potential second wave are likely to keep a cloud of uncertainty hanging over consumers’ heads,” said Lynn Franco, senior director of economic indicators at The Conference Board. As for Europe, an easing of restrictions has also allowed a pickup in economies. Stores are reopening, as are restaurants in many countries, and high-frequency data measuring peoples’ movement to restaurant bookings show the start of a revival.

Some measures of confidence and activity have also stabilised after plunging in the previous two months, helping to embed the idea that the euro-area economy is at the trough of the slump. German business expectations improved in May, and a measure of manufacturing and services activity jumped from a record low. 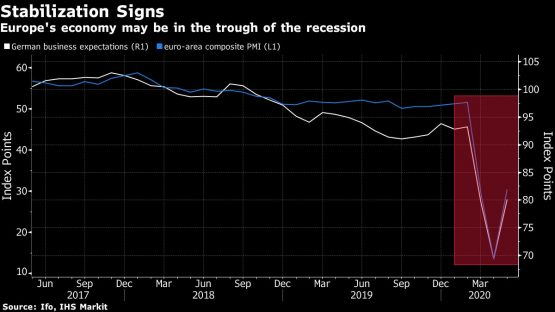 In the UK, the country is moving into a key month in June. Schools will be allowed to restart, and there’s a timetable for stores to open their doors again after two brutal months. But it’s going to be cautious progress. The UK has overtaken Italy and Spain in terms of virus cases, and has the highest number of deaths in Europe.

While Germany has already reopened restaurants, the UK may not do so until at least July. That’s captured in data from booking website OpenTable, which shows a bounce in German dining versus the UK Despite the emergence of activity, most economists have discarded the idea of a V-shaped recovery.

Social distancing rules are still going to impinge on everything from how factories operate to consumers’ willingness to visit stores, car showrooms and bars. Many temporary job losses will prove permanent and debt-ridden companies will be forced to close for good.

That leaves economists warning 2022 may be the earliest before economies recover the ground they have lost despite the euphoria in stocks.

“There is divergence between Wall Street and Main Street,” Nouriel Roubini, a professor at NYU Stern School of Business, told Bloomberg Television. “The recovery is going to be anaemic. Something like a U.”