Economy is facing its biggest economic contraction in nine decades because of a lockdown to curb the spread of Covid-19.
By Prinesha Naidoo, Bloomberg 5 Aug 2020  06:41 The government should take steps to boost productivity and growth in network industries especially in electricity, telecommunications and ports and railways, Mchalia said in a webinar organised by asset manager Ninety One. It should also improve the predictability of the regulatory framework in sectors such as mining, the general business climate and ease of doing business indicators, he said.

South Africa’s economy is facing its biggest economic contraction in nine decades because of a lockdown to curb the spread of Covid-19. Increased government spending, including a R500 billion stimulus package, is set to weigh on an already strained the budget, with state debt projected to peak at close to 90% of gross domestic product by 2023-24.

Reforms proposed in the National Development Plan, adopted by the cabinet in 2012, and a 2019 National Treasury policy paper that could lift economic growth by two to three percentage points and create more than 1 million jobs over a decade, have remained dormant. 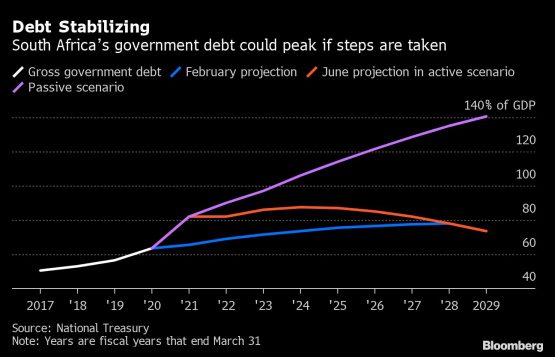 Even before the lockdown, Africa’s most-industrialised economy was stuck in the longest downward cycle since World War II. It was in a recession for three quarters and business confidence was languishing near record lows.

The lender last month approved a $4.3-billion facility for South Africa to assist in fighting the virus. The money came days after President Cyril Ramaphosa said the government would crack down on corruption linked to its virus response and ordered a probe into the misuse of public funds.

While the emergency loan comes without the structural adjustment conditions typical of other IMF programs, the government committed to transparency and good governance in a letter of intent, in which it asked for support.

The lender expects the government to provide it with periodic information on the roll-out of its interventions, a quarterly report on virus spending and an ex-post audit by the country’s auditor-general, he said.

It is open to debate whether the lockdown due to the coronavirus caused the economic contraction or just exacerbated the inevitable. The inept handling of the economy, EWC, restrictive labour laws and the unabated corruption without consequences did more than it’s fair share.

Now that we have subjected ourselves to the IMF’s embracing claws let’s hope they will force the socialists in our government to implement the necessary changes to get us out of the quagmire.

IMF should be concerned.

The amount owed in rands just went up 5% in 1 week due to currency weakness.

Covid corruption on the rise, tax revenue is plummeting and the poor have been waiting 25 years for ANC trickle down BEE economics to kick in.

“Economy is facing its biggest economic contraction in nine decades because of the looting and corruption by the cadres, just before the CV19 pandemic”.

According to this advice from the IMF, South Africa can no longer afford the ANC. The members of the Tripartite Alliance are the Horseman of the Apocalypse for South Africa. Corruption rides a white horse; BEE, a red horse; famine, a black horse; and unemployment, a pale horse.