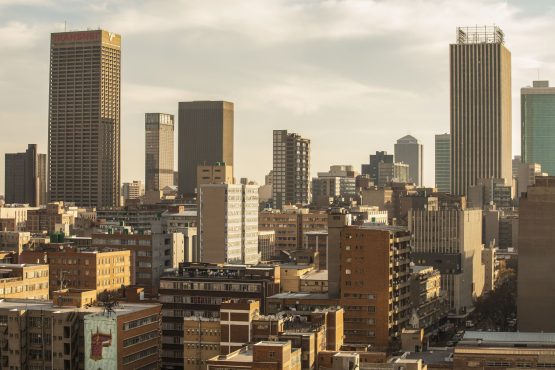 South African inflation surged above the central bank’s target range for the first time in more than five years, raising the prospect of policy makers raising borrowing costs by the biggest margin in almost two decades this year.

Annual inflation accelerated to 6.5% in May, from 5.9% a month prior, Statistics South Africa said in a statement on its website on Wednesday. That’s the highest level since January 2017. The median of 11 economists’ estimates in a Bloomberg survey was 6.1%. 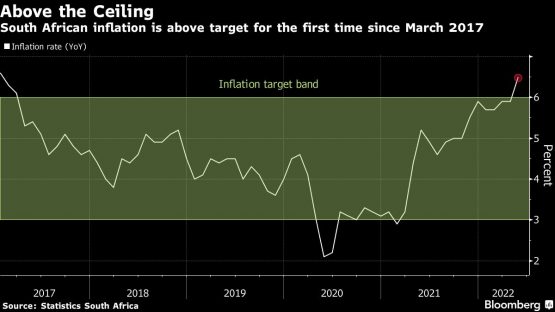 Forward-rate agreements, used to speculate on borrowing costs, are pricing in 60 basis points of tightening at the next monetary policy meeting in July, and 186 basis points in total by year-end. That implies at least one 75-basis-point hike at one of the remaining three meetings for 2022. A three-quarter percentage point increase would be the biggest since September 2002, when the South African Reserve Bank lifted the benchmark repurchase rate by 100 basis points.The breach of the target ceiling coupled with rand weakness — after the Federal Reserve’s biggest rate hike in almost three decades — may prompt the aggressive move. Gross domestic product growth that overshot forecasts in the first quarter would clear the way for it.

“The breach together with the outsized Fed hike earlier this month and significant rand weakening since reinforces our view that the outcome for the upcoming July meeting is a choice between a 50bps and 75bps increase. The risks toward the latter have increased in our view.” — Boingotlo Gasealahwe, Africa Economist

The Reserve Bank, which prefers to anchor inflation expectations close to the midpoint of its 3% to 6% target range, has raised the key rate by a cumulative 125 basis points since November and signalled even higher borrowing costs ahead. In May, the implied policy rate path of its quarterly projection model, which the monetary policy committee uses as a guide, indicated its key rate will be at 5.3% by year-end, compared with a previous forecast of 5.06%.

The rate of price growth was stoked by high food and gasoline costs, even as the government temporarily reduced a fuel levy to contain increases in the retail price of petrol and wholesale cost of diesel. The measure is likely to have delayed the peak in inflation.

“Until now, there was a belief that although inflation in South Africa was rising, unlike the rest of the world, it was not seeing pressures that it took it way beyond ‘normal’ inflation ranges,” said Razia Khan, head of research for Africa and the Middle East at Standard Chartered Bank. “The shock of a single CPI print now calls into question that assumption. Market expectations of only a narrow breach of the inflation target will be reset – and the South African Reserve Bank, with its anti-inflation credentials never in question, will react accordingly.”

Read: What the recent interest rate hike means for your debt
© 2022 Bloomberg

How do people think that raising borrowing costs will decrease this inflation which is mostly externalities. They can hike prime 10% and all it will do is increase inflation. We are NOT overheated and there is NO asset price bubble. A 10% increase will not change the fuel price and supply chain inflation factors at all. It will just freeze an already ice cold job creation market.