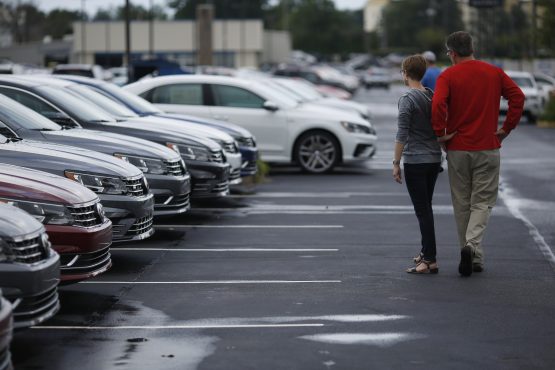 The pandemic may be the tipping-point for smaller entities, which could lead to market share gains for the bigger groups, but the entire industry is battling. Image: Luke Sharrett, Bloomberg

Motus, the vehicle business of Imperial Holdings that was unbundled and separately listed on the JSE, is in the process of reducing the size of its workforce by about 2 000 people through an early retirement and retrenchment process that will cost the company between R120 million and R140 million.

This is among the actions it is taking to reduce the negative impact of Covid-19 and the lockdown on the group’s operations and mitigate the business risk.

Motus CEO Osman Arbee said on Tuesday the bulk of affected people are in the company’s car retail and car rental businesses.

CMH CEO Jebb McIntosh said on Tuesday CMH’s car hire segment presents the group’s highest risk exposure, adding that it was the earliest affected, is the most severely affected, and is likely to be the slowest to return to some form of normality.

McIntosh said the staff complement has been reduced by 15% and a further 15-20% reduction is anticipated over the coming months.

Arbee said Motus has also reduced the size of its car rental fleet by 7 000 vehicles, and has closed 20 of its 100 car rental sites.

He said there is no car rental business and the vehicle rental industry is not buying any cars. Motus is planning to rationalise its dealership footprint, which will impact a maximum of 10 dealerships.

This projection has since been reduced to between 375 000 and 400 000 vehicles, with sales to the vehicle rental industry accounting for the biggest portion of the reduction.

“As a rule of thumb, the car rental industry fleet [stocks] up in July, August and September but this isn’t happening this year,” he said.

Arbee said new vehicle sales are projected to increase to between 425 000 and 450 000 vehicles next year, which includes an estimated 30 000 car rental units.

He added that Motus has postponed non committed and non-critical capital expenditure, reduced costs wherever it can, will not be doing any acquisitions until the end of December to get its cash flows settled in the new environment, and will not pay any dividends or do any share buybacks this calendar year.

Motus last year set up a distribution centre in Shanghai in China and was planning to invest up to R500 million in acquiring stakes in four or five aftermarket parts business in China and expand its brand representation and passenger dealership presence in both the UK and Australia.

Arbee said nothing will happen in the UK and Australia this year and although they were still quite keen on finalising the acquisitions in China, Motus was unable to do any acquisitions until December.

“We will look at one or two but they will most probably be effective from January onwards because in terms of the bank covenants we can’t buy any material businesses. The other thing is we are not travelling at the moment and can’t review any businesses in China,” he said.

This includes R200 million to R300 million of once-off items such as retrenchment costs, deferred tax, and lease impairments incurred as a result of the current economic crisis caused by Covid-19.

McIntosh said the downsizing of CMH’s car rental fleet is estimated to take three to four months and will be accompanied by a mothballing of low mileage vehicles that are fit for use in a further season.

He said the car rental fleet has been reduced by almost 15% over the past two months and it is expected it will be further reduced by 2-3% a week when business resumes until the optimum level is reached.

However, McIntosh said it’s still unclear what that optimum level will be.

He said variable costs, which account for a significant portion of total group expenses, should reduce in line with the drop in revenue, and employee costs – the group’s biggest expense – is expected to reduce by about 40% in the short term “after carrying out an unfortunate reduction in headcount and temporary salary cuts”.

“Once salaries revert to the pre-lockdown levels, the impact is an expected long-term reduction of between 20% and 25%,” he said.

McIntosh added that the group has a strong balance sheet with significant cash resources, which will ensure its future sustainability and allow it to bounce back and gain market share in a motor retail industry that will no doubt have fewer players following the events of recent months.

“There will, no doubt, be many business casualties as a result of the trading disruption caused by the lockdown.

“A number of smaller entities have been on the financial edge following five years of low economic growth, and this event may be the tipping-point. This could, indirectly, lead to the group gaining market share,” he said.

CMH on Tuesday reported a 10.8% reduction in headline earnings per share to 254.8 cents in the year to February from 285.5 cents in the previous year.

The group’s financial year ended before the Covid-19 lockdown was announced.

McIntosh is disappointed with the decline in headline earnings per share.

He said the motor retail segment suffered a 19.2% decline in profit, which was due mainly to the pressure of increasing overheads against a flat revenue and gross profit margin.

He attributed the group’s lagging performance to three of its highest volume contributors losing an average of 17% market share but stressed each manufacturer has introduced new products and began to regain market share late in the year.

Imagine all the car auctions coming up

Between these and auctions of distressed ex-AirBnB apartments in Cape Town, auctioneers will have a busy time…

In addition and not mentioned is CMH has an ethics problem.

The government has taxed this industry to DEATH Import tax (very high) Carbon tax, license disc, registration, tire tax license plates, fuel levy. Look at the price of a car in the states versus here with just the dollar to Rand conversion.People are being taxed to death and your #imstaying, isn’t working. I work in the corporate arena and MANY of my associates are talking and WILL leave.Socialism is a failure and the on the job trainee’s in government don’t know that.They just keep dumbing down the population and expect their votes by giving the T shorts and food parcels.

defunct finger crossing hopefuls that if they don’t read int.press releases on RSA …then everything is just dandy and Ramapooza is the 2nd coming

And the millions who see more to life than sitting on piles of cash…you know you can’t buy happiness right?

These things happens when world governments unnecessary shut down economies!

Not great to lose your job due to a virus with a 99.99% survival rate

But who will be held accountable?

Even in the comic environment of today, the socialists are begging to be re-colonialised with the debt they are willing to get into to try and circumvent the effects of the destruction of capital. Like they are the first to try and used debt to start growth.

The MOTUS early retirement and retrenchment process will cost 70k per person, at the high estimate?