There has been a spike in hunger globally and food prices have climbed closer to a record high.
By Matthew Hill, Bloomberg 2 Jan 2022  09:59 Poor rainfall over vast tracts of southern Africa has delayed crop plantings and prompted a presidential call for prayer, with drought conditions threatening the 2022 harvest and stoking risks of higher food inflation.

Precipitation through mid-December has been significantly below average across Madagascar, Malawi, central and northern Mozambique, and northwestern Zimbabwe, according to the Famine Early Warning Systems Network, a U.S. government-backed organization that tracks food insecurity. Farmers in Zambia have also been hit. Malawian President Lazarus Chakwera has called for a week of prayers for rain.

“Across these areas, drought conditions are ongoing to start the season,” Fews Net said in a statement on its website Friday. “Land preparation activities are delayed, and planting has yet to begin across many areas as of November.”

If rains don’t come before the planting window closes, next year’s harvests will be smaller with a knock-on effect on food prices. Most farmers in the region grow white corn that’s ground and mixed with water to make a porridge that serves as the staple food. The planting season normally starts in November for much of the region, with harvesting complete around April. Malawi, Zimbabwe and Zambia already have double-digit inflation rates and the latter two’s central banks hiked their key interest rates in the final quarter of this year to tame price-growth.  Although regional corn stock levels remain above average, monthly prices were rising and above average, according to Fews Net. Weaker domestic currencies and surging global corn prices have already hurt import-dependent countries, it said.

The potential crisis is developing two years into a coronavirus pandemic that’s led to a spike in hunger around the world and as food prices climbed closer to a record high. A United Nations gauge of global food prices rose 1.2% last month. 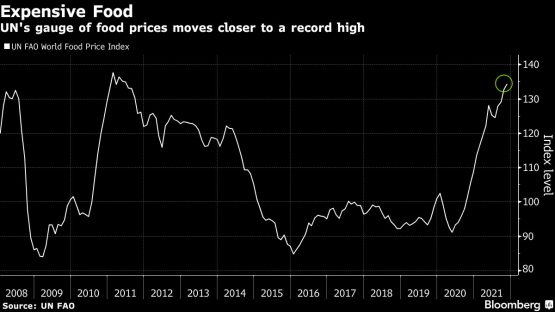 South Africa, which has the region’s largest economy and is its biggest corn producer, has so far had above-average rainfall thanks to the La Nina weather phenomenon.

Still, there are risks to crop yields in excessively wet areas of the country, where planting and fertilizer spraying have been delayed, according to Wandile Sihlobo, chief economist at the Agricultural Business Chamber of South Africa.

I agree with the article in general and the prices of everything have sky rocketed, erratic precipitation in the different regions will only drive this inflation higher – and it most certainly is not transitory.

It would have been good to have seen even a small mention, that the main driver of the massive inflation we have seen and what is about to hit us – was the global lockdowns and the resultant disruption to supply chains and large corporates that have been spoilt for decades on the JIT (just in time) model that is ingrained in so many from varsity – room for error and delays almost nothing.

Giants like the AP Moller group (Maersk etc) have made more in some quarters of 2021 than they had made combined the previous 5 years.

South Africa suffers heavily in the global shipping environment we now find ourselves in, this due to 2 decades of very little FDI and not creating any real value add industries, we used to benefit from this JIT mentality, as the South African market had a hell of a lot of cheap commodities to export and we are known in the shipping industry as a repositioning of containers market – in other words the lines make their money with mainly 40` ctrs of imports of high value project cargoes such as the MIDP or empty 20` ctrs of denser finished goods like tinned fish, rice etc. The lines make 10 times the rate coming to SA and the return leg is already paid for – hence it was for a long time possible to get rates for even 40` ctrs loaded with chrome from Durban to Xingang or Shanghai for as low as $300 – $400 – however, with the backlogs – namely from southeast Asia and China, the demand for these empty co0ntainers is off the charts.

They are desperately needed to fill cargoes to the US West coast ports of Long Beach and LA, where they can get $15,000/ 40` ctr – nett result frequency by the big boys in SA – MSC/ Maersk and CMA etc has dropped by as much as 60% at times or more – or they offload and reload nothing – cut and run as it is called. This was exacerbated by the lockdown/ Zuma riots in July where some lines did not call for nearly a month.

Bulk vessels started 2021 in the teens/ low 20s for post panamax and cape size but rapidly climbed into the 50’s/60s plus. SA now finds itself with a lot of relatively high priced commodities (minerals and Agri products) with either the inability to ship economically, or even if their trade can afford the freight can you find the space?

2022 will be a tough year globally – with rising prices, shortages and sadly unavoidable civil unrest.

The anti-trust people should have a look at shipping. Covid didn’t eat containers or ships, the current rates on inbound and outbound containers are criminal. Low value goods are effectively not viable to import/export. The crisis will wash out and then rates will normalize.

JIT is not working in current environment and everyone is now prepared to higher inventory and safety stocks. But you are confusing spot rates and long term arrangements all bigger players have. Not so much cost. The time of cheap ocean freight is over, which was expected long before COVID. Reliability is the bigger problem, which is adding waste to value chains

Many things can be blamed on the weather, but inflation is not one of them. Southern African countries are net importers of food. The price of food was already at import parity before the drought. Adverse weather may necessitate increased imports at the international price level. Local food prices are rising because the international price is rising due to currency devaluation in developed markets. Regional weather issues have very little impact if prices are at import parity already.

We have said throughout that government intervention in the free market will have terrible consequences. Covid regulations and lockdown measures carry a cost. It is not consequence-free or -neutral. Those ignorant and naive individuals who supported the counterproductive lockdown measures will now pay the price for their lack of understanding of simple economic factors.

Food prices will have to double to compensate for the money supply that has doubled since the beginning of the pandemic. Wealthy nations simply printed money to prop up their economies during lockdowns. Counterfeit money, that does not represent prior services or products, now circulates alongside proper money that does represent prior services or goods. Newly-printed, counterfeit currency is identical to, or indistinguishable from old money. More money is chasing after the same amount of products. The price of those products is rising in terms of that currency, while it stays at the old level in terms of other products and services.

Lockdown measures simply transferred the problem of overcrowded hospitals to overcrowded soup kitchens. It lightened the burden on medical staff to increase the burden on social workers and welfare organizations. Eventually, the problems will still end up at the same morgue.

Oh dear, so everyone in Malawi and Zambia is going to want to move to South Africa to join all the Zimbabweans here already, 2022 is
going to be interesting.