These two events have dented the country’s economic recovery in a short time.
By Mike Schüssler 30 Jul 2021  00:01 Damage inside a mall following looting in Durban on July 13. Image: Courtesy Kierran Allen via Reuters

Recent transactional data shows how consumer spending took a hard knock from the Covid-19 third wave and stricter lockdown, as well as the unrest from the rioting and looting that occurred during the month. These two events have dented the country’s economic recovery in a short time.

BankservAfrica’s Card and Point-of-Sale (POS) transactional data measured consumer spending from the lockdown levels during the June to July period, as well as [during] the riots in KwaZulu-Natal and Gauteng in July. It also compares the spend over this period against the 2020 and 2019 figures.

“The massive dips observed in our consumer spending data in July 2021 are worrying, especially when compared against the previous months where the economy was making good headway against the 2020 slowdown,” says Shergeran Naidoo, head of stakeholder engagements: BankservAfrica.

Transactions during the week of looting

During the main week of looting from July 11, the volume of card and ATM cash withdrawals declined from about 4.5 million transactions per day to about 4.3 million (see Graph 1). This was, however, slightly alleviated by the panic buying in the two affected provinces.

Due to the Sassa grant payment dates (which are factored in the transactional data) and the looting, which started in earnest on July 9, the average number of transactions equalled 3.35 million for the 15 days to July 24 compared to the 3.69 million transactions for the same 15 days to June 24.

The impact was therefore a 9% drop on the comparable 15 days in July 2021. This indicates that the riots and looting had at least a two-week impact on consumer spending on POS and ATM transactions.

Transactions during the May/June lockdown levels

From May 31, when Level 2 lockdown was introduced due to the sharp rise in Covid-19 infections, the number of transactions dropped.

It appears South Africans were taking a cautionary approach during the third wave. Spend was also affected by restrictions, such as the prohibition of alcohol sales, and for restaurants that were unable to operate.

The purple line in Graph 1 indicates the date that former South African president Jacob Zuma was imprisoned. In the days following, when disruptions began and led to the looting, spending remained about 5% below the same period two years ago. There is a slow recovery now. 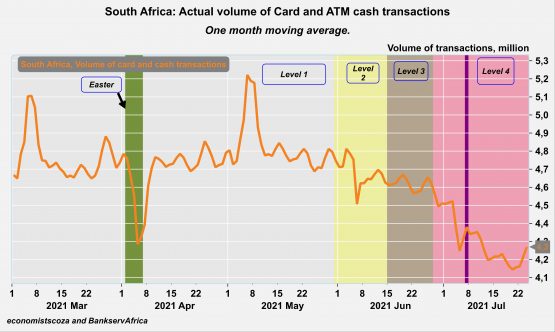 The consumer spending impact from the Level 4 lockdown and the riots is quite substantial, and one can expect this to show a negative impact on June and particularly July economic data.

The estimated 9% transaction decline over 15 days could be equal to about a 5% decline for July for consumption expenditure.

The change in card and cash spending since 2020

Interestingly, the 2020 data also shows a decline in the value of transactions from a very strong year-on-year growth in April and May (due to the very low base because of lockdown levels 5 and 4 during the same 2020 period).

Graph 2: Percentage change of real value of card and ATM cash transactions on 2020 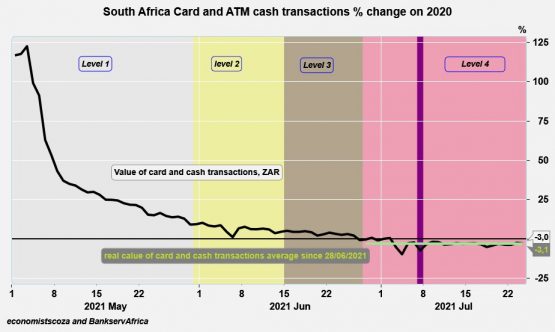 The change in consumer spending on card and cash since 2019

Due to South Africa being in the fourth month of the Covid-19 pandemic in July 2020, and under strict lockdown, the 2019 pre-pandemic figures have been used as a base to illustrate the impact on normal year transactions.

On this basis, South African consumers have spent around 5.2% less since the adjusted alert levels 3 and 4 came into force in June 2021 when compared to 2019. The most recent change was -2.6%.

In the days following Zuma’s imprisonment (see the purple line in Graph 3), when disruptions began and led to looting and rioting, spending remained about 5% below the same period two years ago. There is a slow recovery now.

Graph 3: Percentage change for card and ATM cash transactions on 2019 Brought to you by the government.

Since the ANC cannot distinguish between the government and the ANC we can lay the blame fully at the door of the ANC.

The looting was a result of decades of ANC indoctrination that everything is free and there are no consequences for actions !!

Business owners know how dangerous, counterproductive, and costly it can be to abdicate management decisions to specialist consultants. Specialists are, per definition, narrow-minded, think inside the box, with skills restricted to their field of expertise. Many farmers went bankrupt in the most profitable years because they have based management decisions on the tax advice of their auditor or accountant. Farmers are bankrupted by their fertilizer and chemical specialists who act in their own interest when they motivate the manager to spend inefficiently. You cannot treat the animal when the Vet bill is higher than the value of the animal. All these advisors are the best in their field.

A manager should be a Jack of all trades and a master of cash flow management. You can have the highest-yielding crop, and your animals may win medals at an agricultural show, but if you don’t have the cash flow you are gone.

The Coronavirus Central Command Council is a group of specialists who runs the farm. They are medical experts, psychologists, sociologists, politicians, and an economist, maybe. Each specialist is focused on the protection of his own interests and his own career. Not a single person in that group accepts the responsibility for the cash flow. Even the president professes that “the accountability lies with the collective”.

The Debt/GDP ratio, the budget deficit, the unemployment ratio, and the anarchy and looting prove only one thing – we have run out of cash flow. The farm is bankrupt and the animals are hungry.

“Don’t ask the restaurant owner if his food is nice.”

You are spot on, the animals are hungry. On a livestock farm hungry sheep and cattle will push a fence over to get to fresh pasture, the same thing in KZN.

I have often said on this forum that the ANC must be careful when the masses get hungry, empty stomachs make people angry. The pasture has been eaten……

Any action to go with the endless essays and navel gazing?

Anyone notice how quickly the search and finger pointing at the supposed 12, The dirty Dozen, has died down.

All quiet, just like the zondo sho, all quiet.

Not a single mini Zuma in court.

Confirms what we all know. The whole damn lot are in it.

11 have been arrested and they’re not the big guys we were thinking they’re going after and the media is no longer interested as these arrests no not drive the ratings.

Do you want hourly updates of a prosecution that is going to take years? Grow up. Better things to report on.

Do you want hourly updates of a prosecution that is going to take years? Grow up. Better things to report on.

It is interesting to see how an event (JZ’s incarceration) can influence something like cash transactions. The challenge, though, is no to forget that it never is one event that causes the change. It’s always the culmination of a number of events, beliefs, attitudes, circumstances, etc that creates the right circumstances for an event to take place. So, JZ’s incarceration might have been the point at which the deviation occurred, but it was actually preceded by a long list of other events, attitudes, beliefs that made it possible to have that deviation. In the blame game we can point a finger at the ANC and Squirrel, because they certainly have a lot to answer for, but the event also needed a substantial portion of our nation to think and act in a specific way, for this to have happened. It has become part of our culture, as a nation, to behave in a way where it makes sense to loot, to kill, to steal, to bribe, to demand more, to shirk responsibility. We can say it is because of the wrongs of the past, or inequality, or whatever other excuse you prefer, but the excuses means nothing if the end result is a losing nation. Compare a losing culture to a winning culture where education is revered, where honesty and hard work is rewarded, where it becomes second nature to adhere to rules and regulations and the difference is obvious. This we don’t have, because it takes discipline to develop such a culture (something the African continent seems to lack). We, as a nation, urgently need to find a new, winning culture, far removed from what we currently have (and which doesn’t work).

For some reason I thought this article was going to be on how new TV sales in KZN has dropped and TV sales on Gumtree and Cash Crusaders spiked in recent weeks.

That would be too obvious, honest and controversial. The cash sales obviously dropped because no-one was buying anything formally when they’ve got it all for free.

Thanks for explaining. It was so very subtle.