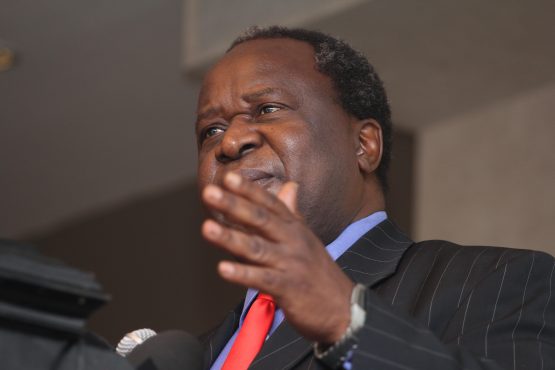 Tito Mboweni pictured on Thursday. He has promised frank talk with investors at Davos. Image: Moneyweb

South Africa has moved further away from where it was a year ago, but the pace at which structural reforms have taken place has not been fast enough to generate the necessary momentum to fuel economic growth.

This is according to Finance Minister Tito Mboweni. He was speaking on Thursday ahead of his trip to the annual World Economic Forum (WEF) gathering in Davos, Switzerland next week.

Mboweni will lead TeamSA, which will comprise Minister of International Relations and Cooperation Naledi Pandor, Minister of Trade and Industry Ebrahim Patel, and a delegation of the country’s business leaders.

The mood at the breakfast briefing at the Crowne Plaza Hotel in Rosebank, where stakeholders from government, business and labour were gathered, was markedly different from when President Cyril Ramaphosa addressed the same meeting in 2019 and received a standing ovation.

At the time the message was of hope, renewal and growth, despite the tough challenges of low economic growth and struggling state-owned entities (SOEs).

A year later the depth of the economic crisis in South Africa, which Ramaphosa described as the “nine wasted years” while in Davos last year, has become clearer.

The economy continues to shrink, the unemployment rate at just under 30% is at an all-time high, with no sign of stopping and the country’s monopoly power producer Eskom has struggled to keep the lights on and costs down. All this while credit rating agency Moody’s is assessing whether or not to keep South Africa’s sovereign debt at investment grade.

“I’ll be honest to say the pace of the structural reforms is not the way we want it to be, so we have to speed up reforms in order to generate this urgent impetus for economic growth,” said Mboweni in response to what message South Africa would take to investors in light of the current state of the economy, despite the unfulfilled promises of the past.

Mboweni said the team would emphasise to investors that the authorities are “determined” to implement serious structural reforms as outlined in the economic strategic paper released by National Treasury last year.

This includes, among others, a determined effort to put SOEs on the correct path. “Those that work must be supported and those that don’t work must get out of the way,” Mboweni said.

Read: SA’s running out of time on reforms: business lobby

This comes as government is under immense pressure to find its R2 billion contribution to the business rescue plans of cash-strapped South African Airways, or face the airline going into liquidation.

Read: SAA flights at risk without R2bn from govt – union

Mboweni said the government is “still trying to find additional funding” for the airline.

On Eskom’s electricity supply challenges, Mboweni said the team would give a realistic picture of the issues and not “lie” to investors or “spin” the troubles at the state utility. However, he added that he would also not be a “doomsayer”.

“It’s not true to say we have no electricity in South Africa,” said Mboweni. “We experience load shedding from time to time as the Eskom management fix this and the other problem, that is true.”

Some of the key reforms the government has put in place in terms of electricity supply is a plan to split Eskom into three separate entities and introduce internal competition within the generation department. Government has also softened its attitude towards consumers generating their own power and feeding the excess to the grid, as Eskom struggles to meet demand.

In an attempt to put the country’s journey into perspective ahead of the Davos visit, National Treasury Director-General Dondo Mogajane said the challenges government is facing are those of a maturing democracy with complexities, and that sometimes solutions will not be as “simple as A or B”.

“There is a lot that we must balance on the fiscus side, and a lot in terms of navigating the politics … the politics, which … if there is an explosion there, we won’t have a country tomorrow,” said Mogajane.

Despite these challenges, Mogajane said the country has to continue believing in the vision of renewal as well as transformation as detailed in the National Development Plan.

Another area of concern is government spending which, despite its efforts to cut spending, has ballooned due to the “never-ending demands of SOEs” and the public sector wage bill.

Not looking to sugar-coat anything Mboweni was clear that SOEs, together with the public sector wage bill, wastage and corruption, are a major threat to the state’s fiscal position.

Mboweni described the public sector wage bill as a “huge” threat to the fiscus. “We have to approach this responsibly, and in time to find a solution before the February budget.”

The budget is expected to be delivered on February 26.

So many words, so many arguments, so many ideas, so many new laws, and yet every year worse results, one outstanding great achievement after 25 years, everything fails.

Please if possible, just give one example of any project/idea that was successful after 25 years (if compared to the rest of the world)?

Muks ….ignorance ….try and avoid it

Cheap spaza pladtic bags are strewn all over the country and the toll customers pay to pack their groceries for recycling. It ain’t happening

Muks, compared to the world should the Gautrain not reached Cape Town by now? We have not done much comparing to rest of the world, except longer Sassa lines, more crime, more unemployment, fading taxes, etc.
Smoking is a bad habit….

The NHI and Expropriation without Compensation will be very successful. Unlike VBS Bank, Electronic Tolls, SAA, ESKOM, Denel, SABC, SANRAL, Transnet, Alexcor, Petrosa, RAF and a thousand other failure. Because we said so.

Unless the ANC is broken up into the good the bad (The corrupt) and the ugly (The commies and unions) there will be no hope.

Not sure if there are even enough good people left in the ANC that has not been “contaminated”.

Going forward there has to be coalitions governing this country.

Oh and about Davos. Please don’t ask for investment. I will just make SA look stupid.

There is little good about the ANC left. Not worth it to be saved.
Electorate should have kicked ANC to the sidelines of politics ages ago. The so called “Good” might be the ones that were not corrupt, but still kept their mouth shut about the rampant graft among their comrades, and never voted to oust JZ in a parliamentary vote of no confidence.
The so called “Good” in the ANC might be the more reasonable ones, but even their proposals, like the ones of Min of Fin TM, do not ga far and fast enough to get the country out its economic quagmire. And they will never get evn the rathe inadequate ideas approved by the rest of the NC and cabinet.
The ANC must be put to rest, like Eskom and SAA, and many other parasitals, the sooner the better.

All blah blah…
Mboweni knows his stuff but handcuffed by stupid ministers and rotten civil servants. Their attitude is one of non accountability and stealing as much as they can. NOTHING will change for the better going forward. It’s too late ..the rot too deep and entrenched after 25 years of looting. The zondo commission is a farce ..no one has been punished…another waste of tax payers money.

Another OMG x2 3 months ago

There is only one way to deal with the African national corruption and that is not to believe anything they say because the opposite is true! Use that as your guideline and you will be well on your way understanding what is going on!
So what is going on … nothing but hot air !!
What a way to run a country …. only if you want to run it into the ground on purpose …… think about it!

The government does not have the courage to implement the real reforms that need to be in place to generate any economic growth let alone rapid growth. For example you cannot cling to a system of supposed transformation that demands a massive premium be paid for black diesel to run Eskom turbines when the BEE entity is just a middle man sitting between the already transformed fuel Co and Eskom. The whole system is just a value intercept model that decimate growth.
Growth comes from producing and exporting goods and services at competitive rates and with sufficient margin for the expansion of enterprise and the economy.

With the ruling party convinced that their party and its constitution are above the nation (ANC first) this is creating conflict between the finance minister and the government and therefore nothing will change. The economy will continue to shrink unless something changes.

Why reforms are slow: ANCCorruption – “Former Eskom board chairperson Jabu Mabuza’s name is entangled in an R11-billion boiler tube maintenance contract at the ailing power utility, where a company of his distant relative has emerged as one of those that made it through to the final bidding process for the critical contract.”

One this these ANC cadres are extremely good at is talking and waffling for hours on end about nothing. They cannot even make any more promises – even run out of those.
Ramapromises not going to Davos because people there will remember what he promised last year and ask for progess and we all know the answer to that.

Where is the rest of the ANC and it’s 800 000 members? Where is the black elite of the country?

Where is the energy, the optimism, the can-do attitude? All the energy is sucked into the void of a black hole of ANC constipation.