‘We are operating under very severe constraints.’
By Antony Sguazzin and Felix Njini, Bloomberg 29 Apr 2020  06:33 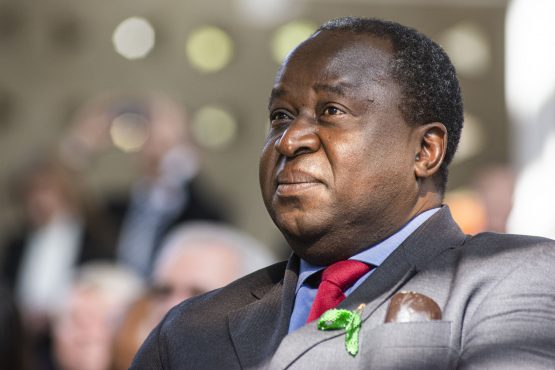 Finance Minister Tito Mboweni said the South African economy could contract as much as 6.4% this year due to the coronavirus outbreak and the budget deficit could swell to more than 10% of gross domestic product.

In a recording of conference call with clients of Goldman Sachs Group Mboweni said the expected the contraction to be deeper than the 5.8% forecast by the International Monetary Fund, and said the rebound to 4% economic growth the lender projects for 2021 is possible but will require significant structural changes to the economy.

“We are operating under very severe constraints,” he said on the call. The projected rebound “is possible but will require South Africa to be quite strong in structural reforms and the recapitalisation of some of the firms which may come under stress during this period.”

While Mboweni will table an adjustment budget, including to redirect R130 billion of spending to help fund a R500 billion stimulus package announced by President Cyril Ramaphosa, a date for that has not been set and the growth and deficit estimates given on the call are the first glimpse of what it may contain. The funding reprioritisation could include delaying some spending on infrastructure, Roy Havemann, the Treasury’s chief director of financial markets and stability, said on the call.

The pandemic and a national lockdown that will only be gradually lifted after five weeks starting May 1, is weighing on output and will reduce tax revenue that’s been falling short of targets for most of the past five years. That, and financing some of the stimulus package, will increase the shortfall on the national budget and increase borrowing requirements.

There will be “quite some substantial tax losses, probably totalling some minus 32%,” Mboweni said. Government debt could go as high as 80% of GDP, “which we are very concerned about” and on the budget deficit “it’s safe to say one must not be surprised if the deficit is north of 10% of GDP,” he said. In a wide-ranging conversation Mboweni said the government would “do whatever it takes” to ensure the survival of the the government’s Land & Agricultural Development Bank, the biggest lender to South African farmers, as it struggles to meet it debts.

“The Land Bank is facing severe liquidity issues. It also came to my attention that they will be unable to pay salaries if they go on like this,” he said. “It is in the interests of South Africa, and the government and the farming sector that the Land Bank is brought back to its peak.”

Mboweni dismissed the opposition of some officials in the African National Congress and its alliance partners to approaching the IMF for assistance on the grounds it could compromise South Africa’s sovereignty. He rejected ruling party opposition to reforming the economy and suggestions that private pensions be forced to invest in state infrastructure, a practice known as prescribed assets.

“I just don’t have time for ideological conversations at the moment,” he said. “Some of us are getting old, we don’t have time to debate the issues we were debating at high school. We have to grab the animal by the scruff of the neck.”

For more about Mboweni’s call with Goldman click here

Havemann was enthusiastic when asked about a proposal that South Africa sell a $5 billion social bond.

“It would be great if we could get a social bond away at a low interest rate,” he said. “We certainly wouldn’t say no to it.”

So refreshing to see someone say things the way it is.

What needs to be said as well is that the damage done by BEE (also ideological) is substantial. Its not just about employment but the supply chain. It is corrupt to the core and just a corruption scam costing thousands of jobs.

They are continuing down this path by bailing out SSME’s as per BEE score?

In a time like this it is one of the most backward things to do. Its like saying we don’t need all the jobs we can get.

BEEdecimated SA’s growth before Covid, to race base relief is unconstitutional.

Be bold I dare you ! Remove every single monopoly that Government has over the economy and you will witness a Renaissance like Africa has never seen before . End the control of the following Rail , Electricity , Water Supply and others …….. You cannot miss this opportunity ! Finally make our country the most Investment friendly country on the planet . Am I reaching for the stars here ? Sigh …..

“….We have to grab the animal by the scruff of the neck.”

…or is it? Tito is very good at innuendos. Too bad 99% of the ruling ANC don’t comprehend

The next short while will clearly reveal the ruling parties true intentions to continue to turn SA into a one party socialist state or to recognise and retract the current free market restrictions in order to facilitate the desperately needed “growth” that has been bandied about for so many years.

If “it’s safe to say one must not be surprised if the deficit is north of 10% of GDP,” then the contraction of 6,4% is underestimate by at least a further 4%.

The tidal wave of defaults only starts end May/June.

So why not grasp the nettle and move to Level 3 so we can salvage what’s left? What’s the point of saving all these lives if there’s nothing left to making a living with? Ridiculous logic. And they won’t take money from the IMF. The government doesn’t care one jot about you or me.

The ANCshenanigans don’t stop even during a time of Covid.

The Command and Control ANCare spending the scarce money to bring in the Cuban Brigade!

Because SA have no doctors of their own, well credible at least.

So how any civil servants are you going to retrench? At least 6,4% of them?

SA taxpayers are getting strangled by the scruff of the neck.