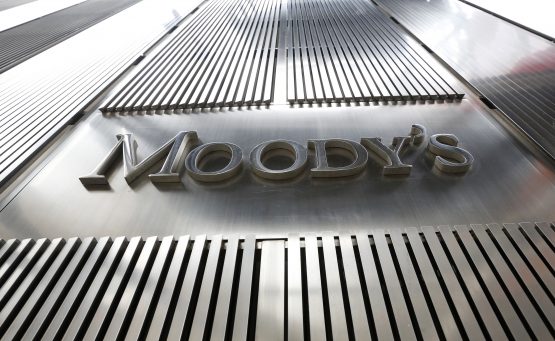 Moody’s is worried that government’s ongoing support of SOEs might increase its projections for South Africa’s debt-to-GDP ratio. Image: Reuters

Moody’s Investors Service, the only major rating agency that has not downgraded South Africa to sub-investment grade (known as junk), has slashed the country’s 2019 economic growth forecast for the second time.

Moody’s now expects South Africa’s economy to grow by 0.7% in 2019, from its forecast of 1% in June, which was also revised down from earlier expectations of 1.3%. The rating agency’s economic growth forecast for 2019 is in line with estimates by the SA Reserve Bank, which expects the economy to grow by 0.6% – lower than the government’s 1.5% official forecast.

Moody’s economic assessment arguably indicates that President Cyril Ramaphosa’s government is struggling to get the economy into shape and reverse structural impediments to growth.

Analysts and market watchers expect Moody’s to revise its outlook on South Africa from stable to negative when it publishes its next review on or before November. This could see the rating agency downgrade the country to junk, which would mean it would lose its remaining investment grade rating soon after.

But Villa said South Africa’s stable outlook means that there is a “low likelihood” that Moody’s will downgrade the country’s credit rating to junk. It prefers to change the outlook first before pulling the junk trigger. This might see South Africa avoid losing its remaining investment-grade rating.

Although Moody’s said governance at key institutions of accountability such as the South African Revenue Service has improved, it warned that government’s economic reforms are slow. “Implementation of reforms is a big question here. It is unclear if there is a realistic path on clear implementation,” said Villa.

In a worst-case scenario, it expects the debt to GDP ratio to rise to 70% in the next two to three years, if the government continues to support SOEs without cutting spending and stabilising public finances.

Meanwhile, government expects the debt to GDP ratio to increase further to 68% in 2021/2022. In a best-case scenario, it expects government debt to stabilise at a mid-60% level, assuming that government stabilises public finances.

In July, Finance Minister Tito Mboweni said the state might have to increase borrowing to fund an extra R59 billion in support for Eskom over the next two years. This will be on top of an already-promised bailout of R128 billion over the next three years.

While S&P Global Ratings and Fitch Ratings downgraded SA to junk status in 2017, Moody’s has given President Cyril Ramaphosa’s reform agenda the benefit of the doubt. The reform efforts it believes are positive include Ramaphosa’s $100-billion investment drive over the next four years, rebuilding the credibility of institutions such as the National Prosecuting Authority and various concurrently-running commissions of inquiries that are exposing corruption in the state and private sector.

Eskom, which supplies over 90% of the nation’s power, is facing a more-than R400-billion debt load, while its R25-billion revenue from the sale of electricity cannot cover its annual interest on the debt of about R50 billion.

While the government has proposed splitting Eskom into three units – generation, transmission, and distribution –  there has not been decisive action taken to reform the power utility. A draft government paper outlining the mechanics of the unbundling is expected in October.

Villa said the government will face “extreme difficulties” in stabilising Eskom, as there isn’t a strategic plan to turn around the power utility. Moody’s expects Eskom to continue weighing on government finances and economic growth over the next few years.

Please downgrade us now so that we can get the reforms in place that SA desperately needs!

What genius of forward planning allowed this to happen?

Which in this case because it is aimed at the entire country would be treason.

In the last twelve years, the electricity tariff increases were a whopping 550% !!!! Any other company with that type of increases would have been smiling with massive profits in hand and not bankrupt.

And yet again, nobody is held accountable. Absolutely disgusting !

The rating agency principle is a bit of a joke following Lehman Brothers.

Last time I checked, the agencies, including Moody’s, had strong ratings for Lehman right up to the point of its collapse (when cash flows were highly negative but profits positive since at least 2006/2007).

I would not take rating agencies seriously in their ability to identify trouble.