South Africa’s Reserve Bank has tightened policy five times in a row, with a magnitude of rate hikes not seen in two decades. That hasn’t done much to help the rand.

While Thursday’s consensus-busting 75 basis-point hike to 5.5% saw the currency post a modest gain on a risk-off day in markets, it’s still headed for one of the worst declines in July against the dollar among developing-nation peers.

Between global inflation and recession concerns, investors have flocked to havens, with emerging countries such as South Africa bearing the brunt of a selloff. Other developing-nation central banks including those of Hungary, Poland and Brazil have also tightened aggressively, but that’s done little to stem the slide in their currencies.

Even after a cumulative 200 basis points of tightening since November, money markets are pricing in another 144 basis points of increases at South Africa’s last two policy meetings of the year. That implies hikes of 75 basis points at each. Still, Bloomberg’s forecast model, based on prices of options to buy and sell the rand, sees a more-than-80% chance of the currency weakening to R17.50 per dollar by year-end. The rand gained 0.3% to R17.00 by 9 a.m. in Johannesburg on Friday. 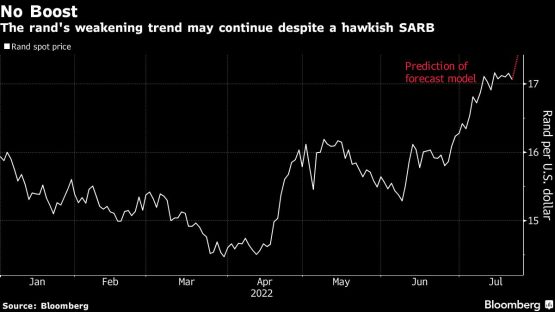 “It’s not a good environment for a meaningful recovery of the rand,” said Marek Drimal, the London-based lead CEEMEA strategist at Societe Generale SA. “Yes, there can be a correction from the current pretty cheap levels, but it’s too late — and too soon — for outright longs in the rand.”

Some of the rand’s losses have been self-inflicted. South Africa is in its longest stretch of rolling blackouts, which is likely to be a drag on growth as the ailing state-owned electricity company Eskom battles to keep ageing coal-fired power plants running. Worries over economic growth in China, South Africa’s biggest trading partner, as well as the slump in commodity prices may also weigh on the economy.

Read: How much is load shedding costing the economy?

Still, the Reserve Bank on Thursday said it would act “with scale” to curb inflation, aligning itself with other global central banks unleashing the most aggressive tightening of monetary policy in a generation.

“I expect another 75 basis-point hike in September, which would be again in response to external monetary tightening and elevated headline inflation,” said Drimal. “But for any meaningful recovery, the rand also needs to see a fundamental boost from the global economy and most importantly from China. And that unfortunately is at risk.”