The risk-off mood sparked by the coronavirus and worries about its impact on companies and growth may yet prove temporary, analysts suggest. Image: Michael Nagle, Bloomberg

The global rush for safer assets has fueled a huge jump in the world’s stockpile of negative-yielding bonds, snapping months of decline in the value of subzero debt.

The pool of securities with a yield below zero surged by $1.16 trillion last week, the largest weekly increase since at least 2016 when Bloomberg began tracking the data daily. Another injection looked certain on Monday, as investors worldwide ditched riskier assets and piled into bonds amid mounting fears over a deadly virus spreading from China. 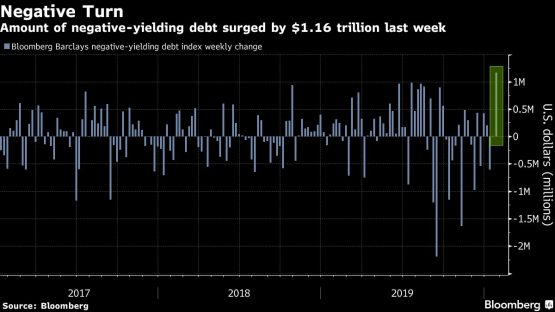 “I would not go short in the global rates markets now,” said Ian Lyngen, the head of US rates strategy at BMO Capital Markets. “The health scare needs to run its course and going with the trade makes the most sense to me.”

It all threatens to reignite a debate about the phenomenon of bonds guaranteed to post losses for buy-and-hold investors. While the total fluctuated day-by-day, it shrank for four straight months through December on signs a slowdown in global growth may be bottoming out and that central banks may pause their easing cycle.

That means no immediate relief for markets that had started to feel the burden of negative yields lift. Last week brought the addition since mid-January to about $1.5 trillion and the pile overall to $12.4 trillion — the highest level in two months. The resurgence is a potent reminder that the market distortions synonymous with loose monetary policies have not gone away. Their impact and effectiveness was one of the key topics at a gathering of world and business leaders in Davos last week. Among the voices, Cantor Fitzgerald LP President Anshu Jain said repercussions for insurers and pension funds “will be felt for years to come.” US President Donald Trump wanted to know who was buying it all.

Even with the handwringing at Davos and growing sub-zero stockpile, policymakers setting ultra-low rates have assured markets the easy money will keep flowing. European Central Bank President Christine Lagarde said last week policy must remain “highly accommodative” with inflation struggling to stay much above 1%, though she did reiterate the bank will keep looking at the impact of negative rates.

The risk-off mood sparked by the coronavirus and worries about its impact on companies and growth may yet prove temporary. The total of negative-yielding debt remains well below its high of more than $17 trillion in August, and many analysts expect it to stay that way.

“The peak of negative yields is behind us for now, for sure,” said Luke Hickmore, a money manager at Aberdeen Standard Investments. “We have a new ECB president, a German government who may well get round to fiscal spending in a new Europe and we may even see a bit of inflation.”

Confidence that negative yields were loosening their grip had been rising recently, in particular for German bunds. Banks such as Citigroup Inc. and NatWest Markets recommended investors brace for a further selloff in Europe’s safest debt and dealers were touting options offering maximum profits should 10-year German yields hit 0%.

Signs of life in long-moribund inflation trades also suggested yields should head higher. This month’s Bank of America Corp. survey of investors found the proportion of those seeing an upswing in consumer-price growth around the world over the next year rose to 56%, an increase of 14 percentage points from last month and the highest level since November 2018.

“Without the virus and without the geopolitical tensions sure, rates would be higher,” said Lyngen at BMO. “Alas, that is not the reality of global financial markets at the moment.”

Instead, bonds with below-zero yields continue to make investors money because prices keep rising amid huge inflows into fixed-income funds, enduring demand from pension funds to central banks and now the safe-haven trade.

“With many clearly concerned about elevated risk asset valuations and the China coronavirus also providing a new dimension, the risk of being ‘caught short’ bonds at the end of the fiscal year might soon start to factor more heavily into investment decisions,” Morgan Stanley strategists wrote in a Jan. 24 report.