JOHANNESBURG – Nigerian consumers are some of the most optimistic on the African continent, but converting this upbeat sentiment into actual spend is “the biggest trick” for businesses to get right, according to Ailsa Wingfield, content and marketing director at Nielsen Africa.

Wingfield was speaking at the launch of Nielsen’s African Prospects Indicator (APi), which examines the macro, business, consumer and retail outlook of nine African nations using official data sources, as well as interviews with business executives, consumers and grocery/kiosk traders.

These nine countries represent 70% of Sub-Saharan Africa’s GDP and 50% of its population, according to the global information and measurement company.

Alongside looking at economic data, Nielsen asked businesses how they view their own ability to grow in these countries and drilled down into consumer spending decisions, seeking to understand what makes consumer purchase products or try new products.

By weighting the four dimensions, an overall ranking was created. Low economic growth (off a much higher base than peers), coupled with the impact of electricity shortages on business and consumer confidence, has pushed South Africa into last place. Despite this, South Africans continue to spend and the economy accounts for the largest base of consumer spend in Sub-Saharan Africa.

Nielsen said that South African businesses still view their opportunities to grow within the country ahead of overall country expectations.

Notwithstanding its more subdued macro environment and business sentiment – particularly in light of naira weakness and the impact of low oil prices on the country – Nigeria’s consumers are overwhelmingly positive about their personal finances and the country’s prospects. They are also most willing to try new products and 43% of retailers in Nigeria feel that consumer spend in their stores is increasing.

Retail execution – having the right products at the right place to translate optimism into spend – remains a challenge, said Wingfield.

With expected GDP growth of 9.1% in 2015, Cote d’Ivoire comes in at an “unexpected second,” says Nielsen, which highlights a need for businesses to focus on consumer-related elements, such as identifying customer needs, making them aware of new products and building trust.

The informal nature of retail in Africa – where products aren’t always easily comparable as on supermarket shelves – means that retailers themselves play a critical part in creating demand for products by making recommendations to consumers, said Wingfield.

The way that products are priced is also of significant importance, as inflation impacts consumers’ ability to spend and has an inverse correlation to economic growth and future sentiment, according to Nielsen.

Measured on a basket of goods – including basic food items, travel costs and airtime – Uganda has the most affordable common wallet at $11.84. This is contrasted with Angola, where it costs $31.97 for the same basket of goods. 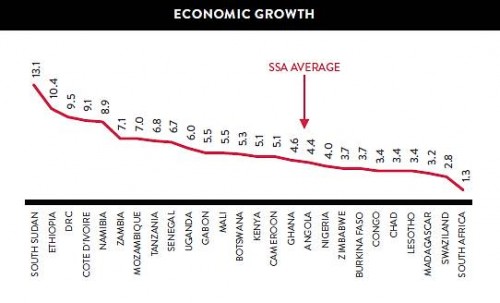 MD at Nielsen South Africa, Craig Henry said that beverages have the greatest growth potential in African markets. “This [beverages] is one of the fastest-growing categories as a super group in South Africa at the moment and I would think that would apply to other parts of the continent,” Henry said.