It’s been a different kind of  crash for the rand over the past four years. The previous two rand-crashes this century have been short, sharp and brutal, only to be followed by equally sharp corrections.

See the graph below: 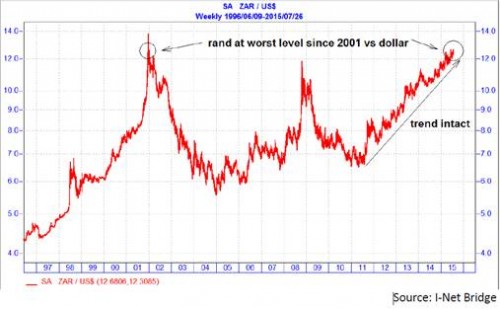 Both previous crashes were blood-curling stuff which made media headlines, and caused massive dislocations in investment and currency markets in both directions. This made it almost impossible to formulate appropriate currency strategies for corporations, governments, parastatals and individual investors.

The first crash, from about mid-2001 to February 2002 when the rand went to its record low of R13.85 against the US dollar from about R6 within eight months, was on the back of the Argentina Crisis. There was almost universal consensus that the rand was heading to R20 to the US dollar.

Even then-finance minister Trevor Manual indicated that such a move was a possibility, while SAA notoriously hedged its currency futures (to pay for new aircraft) right at or very close to the top, which cost it billions of rands. However, the rand turned around and went all the way back to R5.50 to the US dollar a few years later.

South African private investors, who only were allowed to legally venture into offshore markets from 2007 onwards, rushed into global markets at the low of the rand at precisely the time foreign offshore markets peaked. The end-result was massive losses, depending on timing and choice of asset classes.

The same happened in 2008 when the world’s financial markets went to hell and back in a handbasket. Global liquidity dried up and headed straight back to New York, but this did not last long as zero-interest rate policies in the US forced global capital to go searching for yields all across the globe, including South Africa and other emerging market economies.

This lasted for about three years until the rand bottomed out against the US dollar (USD), British pound and the euro in June/July 2011. That’s about the same time the commodity cycle started turning down again. On cue, as gold, platinum and other commodity prices headed south, so too did the rand.

Since then it’s been four years of little, relentless declines in the currency. A death by thousand cuts, but nevertheless equally deadly and equally devastating to the international purchasing power of SA companies and individuals.

Against the USD the rand is now down 81% over four years to the day, down 73% against the pound sterling and 43% against the euro, which has been dealing with its own set of economic problems.

A comparison of the returns of the JSE with global markets also tells a sobering story. Over four years the JSE returned a cumulative 84.5%, which includes capital growth plus dividends, very solid returns and nothing to be sneezed at. However, when compared with similar investments (rand for rand) in other major regions of the world, the returns tell a different story. Asia (Ex-Japan) returned 97.6%, the FTSE All Share returned 136.8%, the MSCI World Index 147.6% and the S&P 500 returned 205.4%, more than double the returns than that of the local market.

Returns on the broader market in the US were driven by the astounding performance of pharmaceuticals, healthcare, technology and, dare I say it again, biotechnology companies.

Biotech over the same period of time is up more than 500%!

So if your advisor has been urging you to take some money offshore over the past four to five years, take them to lunch tomorrow. It’s been by far the best asset-allocation choice that could have been made. The JSE, with the exception of gold and resources, has beaten inflation handsomely over this period of time, but it hides the extent of under-performance against its global peers.

The rand’s decline against almost all major currencies, with the exception of the Aussie, New Zealand (NZ) and Canadian dollar as well as the Brazilian real, can be ascribed to mainly one thing: the collapse of the commodity cycle. Take some solace that over the past 12 months the ZAR has beaten the NZ dollar by 12%. Take that Richie McCaw.

Many years ago, too many to remember, I was privileged to interview the late Dr Gerhard de Kock, governor of the SA Reserve Bank in the mid-80s. It was around 1984 and the rand was once again in freefall against global currencies. At the time the international sanctions campaign was in full swing, putting capital flows into SA under pressure. But at the same time, the commodity cycle was crashing.

On his desk in his office in the old Victorian-style headquarters of Sarb was a computer-like monitor that made beeping-noises every so often.

Eventually, unable to contain myself, I asked De Kock what it was. His reply was that the monitor was signaling when the rand breached certain technical levels.

“What are you going to be doing to stop the rand crashing?” I asked the affable governor.

With a broad smile on his face he turned to me and said, to my astonishment, that there was nothing he could do.

Ever since then I’ve been particularly sensitive to the correlation between the commodity cycle and the behaviour of the rand. Commodities up: rand up. Commodities down: rand down.

Of course the relationship is not that linear and clear-cut. Global capital flows (both in and out), investor sentiment and our non-mineral exports, such as cars, also play a role, but are not as correlated as the rand with the commodity cycle. Plot a rand/dollar exchange rate against the Bloomberg commodity index, for instance, and you’ll see what I mean.

This leads to the most important question for investors going forward: is it still time to take money offshore?

On all three counts the outlook for commodities and therefore for the rand is very negative. The collapse in the commodity cycle – now in its fourth year but seemingly gaining downward momentum – is hugely negative for SA, but also Australia, New Zealand and Brazil. Gold, platinum and iron miners, for instance, are shutting shafts and mines, shedding thousands of jobs in the process.

So unless I’m wrong, the outlook for the rand while US interest rates normalise over the next couple of years, is not great and in fact, depending on the pace of US interest rates increasing, could be quite dramatic.

SA (with Brazil and Turkey) has been labelled as one of the “Fragile Three” when it comes to expected currency weakness forward. These three countries have several things in common: trade and budget deficits, rising inflation and SA and Brazil are commodity producing countries.

SA has the added dimensions of uncertainties including Eskom’s problems, BEE as well as cadre-deployment.

It would be a brave person who’d predict a sudden turnaround in the fortunes of the rand. I personally still see a much weaker rand going forward.

But then again, this column is to be read purely as entertainment (or whatever) and not be construed as investment advice.

*Magnus Heystek is investment strategist at Brenthurst Wealth. He can be reached for ideas and suggestions at magnus@brenthurstwealth.co.za

well as someone shouted as they plummeted past the 29th floor of the empire state building “so far so good!” or in the words of the song – “u ain’t seen nothing yet folks!”. as magnus has always said – get your money out!

As mentioned above, US is tied to china … should China become super volatile … US would follow? In my somewhat humble experience of markets I have always found SA markets somewhat sheltered when the sh*t hits the fan … maybe when markets are running its not as quick to the mark but from a balanced + safe perspective not a bad place to have some funds providing you live there?

I would like to know what Magnus and readers view is on the rand vs Aus dollar prospects over the next 5 years? Is australia a good investment destination?

Firstly, Australia has just fallen off the back of an incredible gas and iron ore boom, built at vast cost. This boom turned Australia into one of the most expensive countries in the world.
Secondly, Australians have some the highest personal debt in the world, paying for all those pricey properties they live in and bought during the boom.
Thirdly, China trade makes up around 42% of Australia’s exports, so if China stumbles Australia ends up in ICU.
I think Australia is about the hit the skids big time.

Magnus, your articles are never dull and when you first corralled the idea to move money offshore, I and many others did so and the rewards are showing.

Some may have instead perceived your advice as 2cents worth. They could be feeling the rut about now.

Always enjoy your view Magnus , but honestly a balanced view I have been told so many times is take about 30-40% of your portfolio offshore … If you plan on living in SA good to have some portion here …. Is this sound advice ?? When I take your view above this so called sound advice makes no sense !! And last comment … Why is safest currency to go offshore in ? Bearing in mind S&P been pretty much fly YTD

My forecast for the ZAR:

How about a currency competition.

We already have a currency competition. It’s called FX trading.

This old man gets a lot more correct than most. He is street smart, experienced and fundamentally conservative.