On full display: The fragility of the global order Taleb argues that admission to the S&P 500 is the start of a suicide process for companies. His reasoning also explains why family businesses survive longer – the owners are punished for faulty decisions. Image: Scott Eells, Bloomberg

Nassim Taleb, author of Antifragile: Things That Gain From Disorder, and before that The Black Swan, has spent the last two decades warning of the fatal cracks in the global financial ecology.

As a former options trader, he approaches the subject from a risk rather than an economic perspective. The more complex the system, the more cracks are waiting to be exposed by a ‘black swan’ event, such as the coronavirus pandemic. Dramatic movements in markets are caused not by predictable and incremental changes, such as earnings growth, but by calamitous events that are virtually impossible to predict. We are living in such a time right now.

The $1.5 trillion stimulus package announced last week by the US Federal Reserve had virtually no impact on markets. The old prescriptions are no longer working the way they once did. We’re in relatively unchartered territory. The Dow Jones sank more than 9% on Monday, triggering an automatic trading shutdown.

Dow Jones Industrial Index down 21% in a month 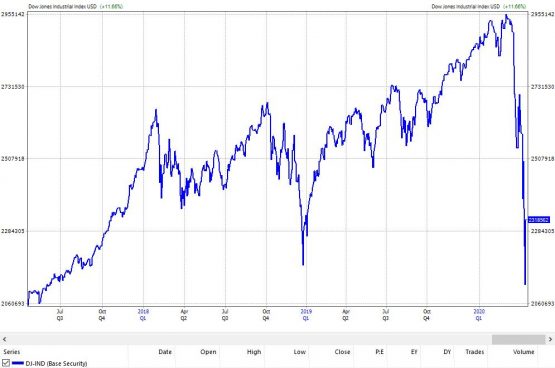 When it comes to investment, Taleb’s first rule is to preserve your wealth rather than maximise your return. Hence it is preferable to earn zero return than risk a 50% wipeout, as happened to some investments over the last few weeks. Our understanding of risk is woefully inadequate to the dangers inherent in a financial system where perceptions of value can swing by 20% or more in a week. Hence, forecasting is a type of fraud that does harm to those that act on the forecasts, says Taleb.

The events of recent weeks may ultimately lead to a complete rethink of our financial architecture.

If this is indeed the start of a major recession, as it now seems, the rent seekers will be knocking at the door of government for rescue or, in the case of failing banks, at the door of the SA Reserve Bank.

Banks may go back to their roots

Some may end up being nationalised, something economist Michael Hudson – author of J is for Junk Economics: A Guide to Reality in an Age of Deception – argues will be a welcome move as it will allow banks to return to their historic role as lenders to the productive sector rather than to stock market and real estate gamblers.

Governments will find it hard to resist the clamour for financial bailouts from all sectors. This may provide short-term stability to the commercial sector, but it will not address the long-term structural fault lines.

Taleb’s Antifragile argues that systems are made more robust by allowing companies to fail.

When the US banks were bailed out by the Federal Reserve in 2008, bad decision-making by bankers was rewarded and encouraged. The chances of a major banking failure have increased exponentially as the economic consequences of the coronavirus pandemic become apparent. Many airlines, travel companies, hotels and restaurants will likely file for bankruptcy or business rescue in the coming months. Factory closures and job lay-offs are almost certain.

Taleb is dismissive of most economists for peddling advice for which they suffer no harm in the event their advice turns out to be wrong. The same goes for bureaucrats who are shielded from punishment regardless of the harm caused by their decisions.

Tax revenues and expenditures are based on economic growth forecasts that are more PR fluff than actuality. Finance Minister Tito Mboweni’s forecast of 0.9% growth this year was already on the high side, even before the outbreak of the virus. That means tax revenues will undershoot and government borrowing will overshoot, pushing the deficit dangerously above the forecast 6.5% for the current fiscal year. That tab will be picked up by taxpayers.

Read: A decade of budgetary whoppers

Fiscal deficits have proven to be a prime source of fragility in social and economic systems. Government borrowing can be expanded with no accountability.

Another fault line is the pursuit of corporate size for its own sake.

There is very little evidence that size delivers economies of scale but can, in fact, be damaging during times of stress. Some economists have been wondering why company mergers do not deliver the promised ‘synergies’. The combined unit is now much larger, hence more powerful, and according to the theories of economies of scale, it should be more efficient.

Executive hubris appears to be the prime motivator behind merger and acquisition activity, as economist Richard Roll pointed out in 1978. Three decades later, Roll’s ‘hubris theory’” is as valid as ever, given the poor track record of mergers. Which is why Taleb argues that admission to the ranks of the S&P 500 is the start of a suicide process for companies. It also explains why family businesses survive longer. The scale is more manageable and the owners are punished for faulty decisions.

The bureaucrats who delivered us power blackouts (and they weren’t all Eskom employees) and deindustrialisation have moved on to other sinecures and have gone unpunished. As Efficient Group economist Dawie Roodt pointed out in a recent presentation on the 2020 budget to the Free Market Foundation, it was current Public Enterprises Minister Pravin Gordhan who was the responsible minister of finance while state-owned companies were being run into the ground. The EFF calls him the “minister of load shedding” and wants him gone for this and other reasons, though business leaders love him.

Lack of accountability for bad decisions carries no consequence for those who make them. Perhaps we should invoke the Code of Hammurabi, a pre-Christian Babylonian king, who demanded the heads of architects who built houses that collapsed and killed the occupants.

Roman engineers were expected to sleep under the bridges they built so they would be first to die in the event of collapse.

Errors, provided they are small, are fine as long as those making them suffer appropriate harm for causing them – what Taleb calls “skin in the game”. Most successful entrepreneurs have had one or more business failures. They learn from these losses and avoid repeating them. This is what makes for more robust societies.

“At no point in history have so many non-risk-takers, that is, those with no personal exposure, exerted so much control,” writes Taleb.

“This is the Davos crowd, empty suits who shape the future of the planet and carry no downside risk for their awful prescriptions. Inevitably, they will make fatal decisions and suffer no consequences.”

Another fallacy of government is that its intervention is benign. When faced with complex and failing systems, the cure is subtractive rather than additive. If you are ill, removing things that harm the body, such as sugar and cigarettes, usually works better than taking a drug. On this basis, it is unlikely that the raft of new financial sector laws and regulations passed in last decade will deliver the stability it set out to achieve.

Most of recorded history derives from black swan events, rather than the ordinary.

Our risk models are based on false probability theories that assume the ordinary, when history tells us it is the extraordinary and the unpredictable that will decide our futures.

“Every additional deviation in, say, the unemployment rate – particularly when the government has debt – makes deficits incrementally worse,” writes Taleb in Antifragile. “And financial leverage for a company has the same effect: you need to borrow more and more to get the same effect.

“Just as in a Ponzi scheme.”

Sounds good reasoning here, too many people are not accountable when economic disaster strikes. Nationalizing any assets is not an option for me.

These principles (of making the decision-makers the FIRST to experience the consequences of their decisions at an immediate, and very PERSONAL level) are, as stated, very old.

We need to make every effort to EXPLICITLY embed these principles at the highest levels in our political systems. From there they naturally flow into the rest of society.

Institutions like the Judiciary, for example, must hold individual magistrates and defence attorneys etc PERSONALLY responsible to recompense a victim’s family when dangerous criminals are irresponsibly released on bail.

Sadly for the financial institutions which employ them, some option writers don’t approach their jobs from a risk perspective. Or perhaps they do very shrewdly, knowing that losses are for the account of their employer whereas they share in profits.

On a bigger scale many large institutions are run by executives who look after themselves first, then cry for bailouts or gap it when they hit a headwind. From banks to THS, Steinhoff and state owned enterprises the mantra is the same “I’m all right Jack”. They shouldn’t be.

And this is why BEE would never work, for slightly different reasons than
usually mentioned. It has less to do with people “not working” for something, or getting some kind of handout. It’s the fact that BEE did more than remove hard work from the equation: it tried to remove risk for those involved as well. If BEE wasn’t just a handout, but a handout that also forced the recipient to assume risk, SA might have been a different country today.

Well, the situation was controllable from the outbreak.

But then the WHO decided that countries should leave their borders open and the travel game should go on.

The countries that shut out the virus from the outset aren’t experiencing the last minute rush to prepare like Europe, USA, South America and Africa. They’ve contained it.

Does the WHO offer billions of refunds on bad advice? I guess not.

The same WHO who appointed Rob Mugabe as goodwill ambassador in 2017.

A conversation with entrepreneur and author Vusi Thembekwayo

A conversation with entrepreneur and author Vusi Thembekwayo