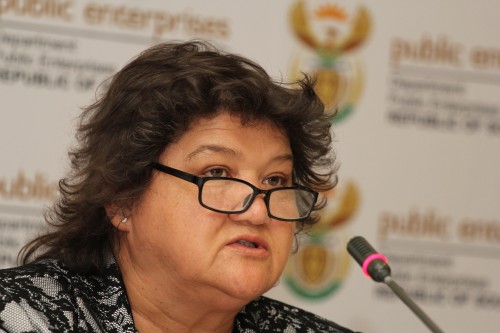 On Tuesday, the Ministry of Public Enterprises released a statement on behalf of Minister Lynne Brown in response to investment manager Futuregrowth’s announcement on August 31, that it will no longer lend money to six of South Africa’s largest State companies due to concerns around how they are being run, government infighting and threats to the independence of the finance ministry

Africa’s biggest specialist fixed-income money manager, which has about R170 billion in assets, said it will only resume offering loans and rolling over existing debt if it sees proper oversight and governance at the State companies, according to Bloomberg.

Read the full statement by the Ministry of Public Enterprises below:

Statement on Futuregrowth’s withdrawal from SOC funding (Eskom and Transnet)

As Shareholder Representative of Eskom and Transnet, the Department and the State Owned Companies (SOCs) have reflected on the decision of Futuregrowth Asset Management to withdraw investments into Eskom and Transnet for the future.

We have noted Old Mutual`s statement that the announcement and decision of Futuregrowth Asset Management does not represent the views of Old Mutual, thereby distancing itself from the decision of its subsidiary company.

For public record and information to the citizens, the Department annually receives four Quarterly Reports and an Annual Integrated Report that includes an unqualified and clean Audited Annual Financial Statement for the financial years. These reports comply with the Public Finance Management Act, the Companies Act, the King III Report, the Memorandum of Incorporation, the Shareholders Compact, the Strategic Statement of intent and the established Legislation of the two entities. These reports demonstrate good economic and financial governance, prudent strategic and operational management, and having in place appropriate institutional structures.

Capital markets and multilateral institutions continue to show confidence in Eskom and Transnet’s corporate, economic and financial governance systems, their investment decisions, as well as these companies’ long term viability and sustainability. Both Eskom and Transnet have NOT DEFAULTED payment of loans and other on credit facilities. The rigour and robustness of the business plans of these companies have seen funds being approved from AAA rated multilateral institutions such as the African Development Bank and international funding institutions like the BRICS Bank.

We take note of the fact that Old Mutual has distanced itself from its subsidiary and the potential implications to our domestic financial markets and future investments into SOCs. Old Mutual has to date not instructed Futuregrowth Asset Management to retract both the decision and the statement.

We also note a principle position taken by the Association for Savings and Investments South Africa (ASISA), where they caution Futuregrowth Asset Management against inviting other Fund Managers to support its decision, as doing so will be deemed collusive or restrictive behavior in terms of the Competition Act.

Government is committed to engage all affected parties as well as improve channels of communication to avoid these unfortunate actions. I have agreed to a meeting on Thursday 8 September 2016 with the CEO of Old Mutual and the Chief Executive of Futuregrowth Asset Management.

Issued by Ministry of Public Enterprises

Typical finger-waggling arrogance from the ANC.

Futuregrowth made a rational business decision as any company has the right to do, however unpopular that may be – it must look after its customers.

Naturally the ANC is incapable of any introspection that may cause them to think about why this has happened.

Much easier to claim all is well with the SOE’s in question and point fingers at the private sector.

Maybe I don’t understand something, but I can’t see that the Department’s clean audit has anything to do with governance issues at SOE’s. Also the multilateral institutions mentioned are not exactly at arm’s length. A little acknowledgement of the damaging public perception might lend the statement some credibility

What you don’t get Lynne Brown, is that the decision not to lend more money to your portfolio, is a direct motion of no confidence in your position as minister, you personally, the government you represent as well as in your herd-boy president. You failed the test Lynne Brown!

I personally know Lynne Brown – very capable person.
Andrew Canter has made the biggest mistake of his life – won’t be around for much longer!!!

Andrew Canter could very well be a banker for longer then Lynne Brown will be a minister. I have no issues with bankers not lending money when they think there is a risk involved. If Lynne Brown is shafted by her so called boss, how does that guarantee repayment to Futuregrowth? It might also very well be the case that the ANC may not be there as long as Andrew Canter is the CEO of his organisation. That too could be an option. And a good one at that too I guess.

If Lynn Brown is so “capable”, why did the ANC lose power to the DA in the Western Cape while she was ANC premier in 2009.
The WC voters obviously didn’t think she is so “capable”

Yes, the Brics Bank. But they money it lends out is government cash from those foolish enough to risk the crash in question. What the ANC don’t get is that they caused the questions raised about their ability to repay loans. They have to accept ALL the blame.

Such a good story to tell, I suppose?

do you know what you are talking about????

Paolo,
Would you invest your life savings in a company run by the ANC?
MMMM?

So why should Futuregrowth invest the pensions of their members with Soe’s?

The trick dearie is to not lend money before the default.

What is the point of not lending money after the default?

Exactly my sentiment.
But some people name drop and say they know Lynne Brown, so I guess they would invest in bankrupt companies.

What she does have in her favour is that Paolo Gianstiano claims he knows her personally and he thinks she is more capable than our esteemed president thinks, but then maybe Lynne Brown has no clue who Paolo is.

Lynne Brown’s highest education is a teachers diploma! She knows nothing about running anything let alone multi billion SOE’s. Minister of small business development, Lindiwe Zulu, same incompetence. Highest qualification, a teachers diploma, never been in business, knows nothing about business! 100% clueless!
With the exception of a handful of treasury and reserve bank officials the rest of the government could not run a pinball machine successfully. We are firmly on Zimbabwe Road. Only an ostrich would not see the future clearly.