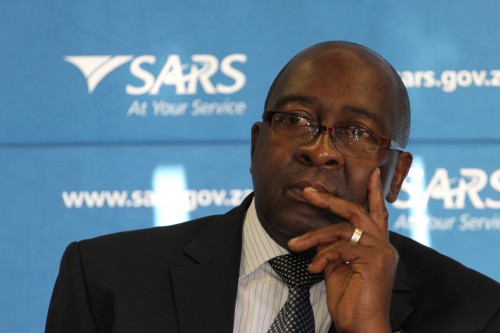 Already facing sluggish growth, a persistent fiscal deficit and unemployment at 25% he’ll now have to find more money to repay interest on dollar securities at a time when debt- service costs are already the government’s fastest-rising expenditure item. That risks undermining Nene’s pledge to cut the fiscal deficit, and bondholders are taking note.

Investors are demanding the biggest premium in more than six years to hold the nation’s dollar securities, according to JPMorgan Chase indexes. Yields on 10-year Eurobonds have climbed 34 basis points this month to the highest since December, outpaced only by Russia and Turkey among 31 major emerging markets.

“They’ve got to worry about it,” Isaac Matshego, an economist at Nedbank Group, said by phone from Johannesburg on Thursday. “It could point toward a higher-than-planned budget deficit.”

In February, Nene targeted a fiscal shortfall of 3.9% of GDP for the year through March 2016, up from 3.6% forecast in October. Debt-service costs would consume 10.1% of expenditure, compared with 9.6% the previous year, he said. Net debt was projected to rise to 42.5% of GDP this fiscal year, from 40.8%, with foreign-currency debt accounting for less than 10% of the total.

Remaining interest payments on dollar debt this fiscal year will be about R640 million higher than projected in the February budget, according to Bloomberg’s calculations. At the current rand level, payments would be about R6 billion higher over the next 10 years.

No one is in doubt about South Africa’s actual ability to pay back its debt, Peter Worthington, a Johannesburg-based emerging-markets analyst at Barclays’ South African unit, said by phone. Still, investors worry about “countries like us with big external and fiscal deficits that have a large financing requirement just as we’re going into a period where we’re going to see big hikes coming out of the Fed.”

Yields on South Africa’s $2 billion of bonds due September 2025 climbed 12 basis points last week to 4.84% by 4 p.m. in London on August 21, while similar maturity local-currency yields added 4 points to 8.32%. The sovereign spread, or average premium of South African yields over U.S. Treasuries, was unchanged at 328, the highest since May 2009.

The rand was little changed at 12.9335 per dollar by 5 p.m. in Johannesburg after breaching 13 on August 20 for the first time since December 2001. The rand’s 5.9% slump this quarter would support exports, though the potential benefit was being undermined by electricity shortages, the National Treasury said in an e-mailed response to questions on August 21.

“The weakness of the rand against the dollar is broadly in line with the changes in other emerging-market currencies,” the Treasury said in the e-mail. “The knock-on impact of higher prices for imported goods on inflation has so far been relatively low although this remains a risk.”

Any advantage from increased exports will probably be outweighed by rising prices, said Kevin Lings, an economist at Stanlib Asset Management in Johannesburg.

“We’re still going to see much more of the effect,” Lings said by phone on August 21. “The negative effect will increase over the coming year because of the sustained impact.”

What is minister Nene going to do? hmmm …
certainly the most worst time to be a Finance minister 🙂
I know what to do, I have bought myself some very cheap shares today.
Thank you scared investors 🙂