US Treasuries rallied as talks of easing tariffs on China imposed by the former administration failed to alleviate recession fears. Commodities from oil to copper remained under pressure as the dollar rose.

The S&P 500 eked out a modest gain after falling as much as 2.2%, as easing energy prices and bond yields took pressure off higher-valuation shares. The tech-heavy Nasdaq 100 jumped 1.7%. Treasury yields declined, with the 10-year yield around 2.83%. Data released Tuesday also showed durable goods orders and factory orders rose more than expected in May.

Investors continued to fret over a potential US recession and stubborn inflation despite talks of tariff reductions. US and Chinese officials held discussions after reports that Washington is close to rolling back some of the trade levies imposed by the former administration. Reducing tariffs on imported Chinese goods could impact consumer prices in the US, but some suggest that it would do little to cool inflation.

“With the first half of the year moving into the rear-view mirror, investors can’t help but wonder what lies ahead in a year that thus far has wrought heightened levels of uncertainty, disruption and dysfunction that has rattled asset class values across the spectrum of the good, the bad, and the ugly,” said John Stoltzfus, chief investment strategist at Oppenheimer & Co. 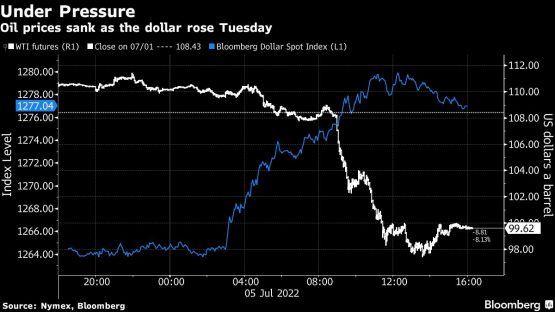 The odds of a US recession in the next year are now 38%, according to latest forecasts from Bloomberg Economics. Signs of a rapidly deteriorating US economic outlook have spurred bond traders to pencil in a complete policy turnaround by the Federal Reserve in the coming year, with interest-rate cuts in the middle of 2023.

“If the Fed changes course now, they might as well pack their bags and turn the lights off,” Kenneth Polcari, senior market strategist for Slatestone Wealth LLC, wrote in a note. “Yes, the economy is slowing but inflation continues to be an issue and that is the focus now.”

In Australia, the central bank raised its key interest rate as expected to 1.35%. It’s among more than 80 central banks to have raised rates this year. The nation’s dollar weakened after the decision.

In Europe, equities dropped to the lowest since January 2021 ahead of the earnings season, which investors will watch closely to see whether corporate profit growth can handle inflation and supply constraints.

Bitcoin rose after waffling throughout the session. It traded around the $20,000 level.