Russian inflation slowed more than forecast ahead of an interest-rate decision on Friday, capping a reversal for an economy that’s learning to live under sanctions imposed over the invasion of Ukraine.

Consumer prices rose an annual 17.1% in May after a gain of 17.8% a month earlier, the Federal Statistics Service said Wednesday. The median estimate in a Bloomberg survey of 20 economists was 17.4%.

On a monthly basis, inflation was just 0.1%, below every forecast in another poll. Prices declined in the seven days ended June 3, the second time Russian inflation turned negative in recent weeks. 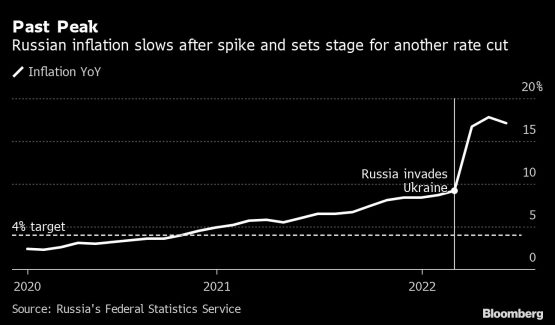 Inflation has peaked much quicker than anticipated this spring as domestic demand cooled off and gains in the ruble put the brakes on prices. International sanctions aimed at crippling Russia’s economy initially led to a brief currency shock and supply disruptions, followed by a wave of panic buying that further drove up prices.

Encouraged by the strong momentum behind disinflation, Bank of Russia Governor Elvira Nabiullina has already cut rates three times since the the beginning of April, delivering nine percentage points of easing for an economy in recession. A smaller move is likely this week, with most economists surveyed by Bloomberg predicting the benchmark will be cut to 10% from 11%.

“Russia may have seen the worst of its inflation spike, with a soaring ruble and plunging demand curbing price pressure. There’s still potential for a resurgence in costs as shortages intensify, and that could keep the central bank relatively cautious, even with more easing likely this week.”

The inflation slowdown, Russia’s first in a year, means price growth may fall short of central bank projections in April that showed it could reach 18%-23% at the end of 2022. Policy makers don’t expect to achieve their 4% inflation target until 2024.

Aside from another probable rate cut on Friday, the Bank of Russia may again signal that further monetary easing is possible at meetings ahead, according to Raiffeisenbank analysts Stanislav Murashov and Grigory Chepkov. “Stable inflation, albeit temporary, is allowing the central bank to ease monetary policy,” they said in a research note before the data release.