Russian inflation eased slightly from a multi-decade high, but there are signs that food staples and imported goods are growing increasingly scarce after international sanctions over the invasion of Ukraine.

Consumer prices rose 2.09% in the seven days ending March. 11, down from 2.22% a week earlier, the Federal Statistics Service said Wednesday. Annual inflation accelerated to 12.54% as of March 11 from 10.42% a week earlier, according to the Economy Ministry.

Russia may be headed for “Soviet-like inflation” that manifests itself not in higher costs but through a deficit of goods, according to Alexander Abramov, a specialist on financial markets at RANEPA, a state-run university in Moscow.

“The main risk now is the emergence of a shortage of basic imported everyday goods, as well as durable goods,” he said. “Many are no longer available in stores, and prices in online stores have risen sharply.” 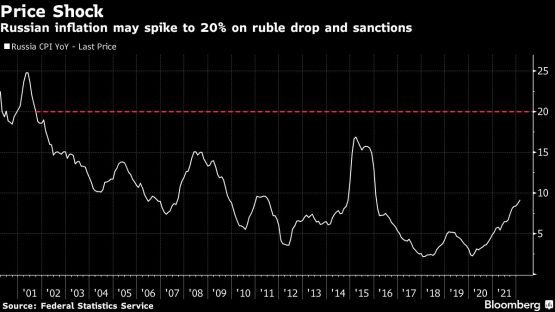 The rouble’s collapse, coupled with the blow from sanctions, is keeping inflation near levels unseen in Russia since the government’s debt default in 1998. Consumers rushed to make purchases in recent days in anticipation of further price increases, as an exodus of international companies adds to fears of scarcity.

What Our Economists Say:

“Another jump in the weekly data will help put numbers to the price shock enveloping households and businesses. Even once initial rouble effects fade, sanctions are likely to keep pushing up prices for months to come.”

The Bank of Russia hiked interest rates to 20% and imposed capital controls to support the ruble. It’s set to review policy at a meeting on Friday.

“Tight monetary conditions are helping inflation ease, but it won’t save it from reaching 20% this year in the conditions of deficit of certain goods and a considerable ruble drop,” Raiffeisen Bank analysts said in a note to clients.