South Africa could move toward an even deeper junk credit rating this week by losing the only stable outlook on its debt assessments.

Of the 23 respondents in a Bloomberg survey, 12 expect S&P Global Ratings to change its outlook on the country’s credit rating to negative from stable on Friday. That means the next move from the company, which already assesses South Africa’s foreign-currency debt at three levels below investment grade, could be another downgrade. That would take the country to a single B rating and signal an increased probability of a default. The nation’s debt assessment is at the lowest level since it first obtained credit ratings 26 years ago. The majority of survey respondents expect Moody’s Investors Service, also on Friday, to leave its assessment at one level below investment grade and they don’t see Fitch Ratings, which is at two levels into junk, downgrading this year.

While that would please Finance Minister Tito Mboweni, who said last month South Africa had already been “punished enough” with downgrades during the coronavirus pandemic, the ratings outlook for next year will depend on the Treasury’s ability to reduce spending, narrow the budget deficit and bring down the debt-growth trajectory.

Mboweni’s mid-term budget last month showed plans to pare the government salary bill that’s surged by 51% since 2008 and is now equal to 11% of gross domestic product. However, that risks a backlash from politically influential labour groups that are already trying to compel the government to honor a previously agreed pay deal through the courts.

“The National Treasury’s fiscal consolidation path, though slower, remains ambitious. It hinges on wage bill reductions that have historically been difficult to achieve, and growth-boosting reforms that are still thin on details. The ratings agencies may choose to wait for the February budget and the December court outcome on the ongoing dispute to freeze wages this year as it lays the foundation for the next round of negotiations.”

The nation’s track record on negotiating wage agreements in line with budget assumptions is weak and there is limited room for offsetting measures in other expenditure areas, Fitch said last month in response to the budget update.

Moody’s could delay “downgrading South Africa now to wait for the outcomes of the wage agreements and to see whether the government is committed to fiscal consolidation,” said Elna Moolman, an economist at Standard Bank Group Ltd. “Any disappointment in this regard could then weigh on the rating early in 2021.”

Further downgrades would increase debt-service costs that are predicted to grow by an average 16.1% over the next three years, complicating fiscal consolidation efforts. 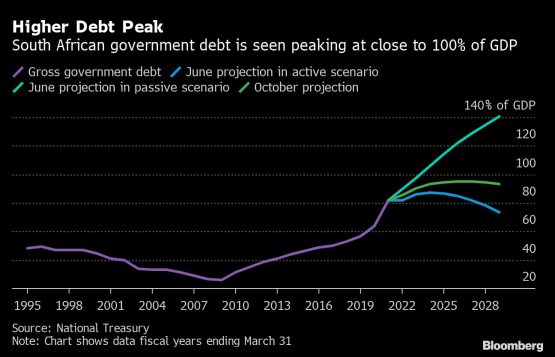 The economy is projected to contract the most in nine decades this year. It’s expected to remain subdued and fiscal consolidation is likely to be slow, Moody’s said last month. The budget failed to detail steps to lift growth and stem the deterioration in public finances, the company said.

“The February 2021 budget will likely give rating agencies a better picture of how realistic the proposed fiscal consolidation could be, and hence they are more likely to take decisive action in 2021 if the fiscal stress shows no, or little, signs of resolution,” said Mike van der Westhuizen, a portfolio manager at Citadel Investment Services.

What does it matter if we go deeper into junkstatus, we pay some of the highest rates already, the Rand is dependent on dollar strength, and the USA is printing money on large scale. Another 4$ trillion coming up, which will move USA debt to 31$ trillion. If you come to think the USA debt was 10 trillion 12 years back.
South Africa is just floating along and our debt will grow forever. The Rand can rather stay at these levels or even get stronger, and we can do nothing to little to change it.

Who cares about ratings, it is biased anyway and controlled by very rich and influential people.

Look at the US debt? the highest in the world.

Look at the UK economy? It is doing as bad as our economy but they do not get downgraded!

It is these ratings agencies that to an extent very unfairly destroy countries.

Your comment gave me a good laugh. The ratings are controlled by very rich and influential people! The provision of credit ratings is an important and established on which the debt and fixed income markets rely, it is not some illuminati conspiracy. Where do you get this stuff from? So may you don’t know how it works. Go online, do some reading, get yourself informed and free yourself from your self-imposed ignorance.

I guess you also believe that the WWE is real?

Again you show your ignorance. BH owns around 13% of Moody’s but that in no way means Warren Buffett control’s the credit ratings that Moody’s produce. To believe that is truly irrational. You take one situation and make it the rule for an entire industry. Not everything that happens in the world is a conspiracy and if you have doubts about Moody’s then consider the ratings of other agencies.

Do companies not pay ratings agencies for their ratings? If not how do you suppose they earn money? If companies do pay a fee to ratings agencies do you not see a conflict of interest? Much like with the housing fiasco in 2007, or any other companies/countries that defaulted while still rated investment grade by the ratings agencies. The game is rigged, but unfortunately it is the only game in town.

I doubt a downgrade is coming by looking at the Rand strength.

The usual panic selling of financial shares on the JSE.

Does not seem that way by looking at the Rand strength.

The herd is selling the best shares, the financial shares.

Another downgrade ? Well , our government worked hard , diligently and untiring for it.

Only a matter of time in my opinion.