Unless the government fast-tracks growth-enhancing structural reforms, according to the Centre For Risk Analysis.
By Prinesha Naidoo, Bloomberg 4 Aug 2021  16:51 South Africa will probably experience more frequent bouts of violent protests unless the government fast-tracks growth-enhancing structural reforms, according to the Centre For Risk Analysis.

The country is reeling from a week of deadly riots and looting last month that erupted in the eastern KwaZulu-Natal province and the commercial hub of Gauteng after the jailing of former President Jacob Zuma. The violence marked the worst civil unrest in South Africa since the end of White-minority rule in 1994, and left 342 people dead and thousands of businesses looted or burned down.

The violence reflects an economy that has been “stagnant for more than a decade,” said Gerbrandt van Heerden, an analyst at the Johannesburg-based think tank. “A lot of the unrest that South Africa has experienced this year and before are connected to a failing state.”

Data shows there is a strong correlation between economic growth and social stability, and rioting and looting could become more prevalent in the next few years unless the authorities are serious about implementing reforms, Van Heerden said. Small business will likely suffer the most from frequent unrest and higher crime levels will weigh on South Africa’s ability to attract investment, he said. The government has formally adopted five blueprints to boost gross domestic product and job creation since the African National Congress won the nation’s first all-race elections 27 years ago. However, most of the policies have been stalled by powerful vested interests and policy paralysis, which left Africa’s most-industrialized economy stuck in its longest downward cycle since World War II even before the coronavirus pandemic hit output.

Reforms proposed almost two years ago by the National Treasury and the Economic Reconstruction and Recovery plan unveiled by President Cyril Ramaphosa in October are only now starting to show progress, including electricity generation by independent power producers and steps to ease port congestion. Other policy proposals the government has yet to implement include allocating broadband spectrum and speeding up visa access for tourists and workers with scarce skills. 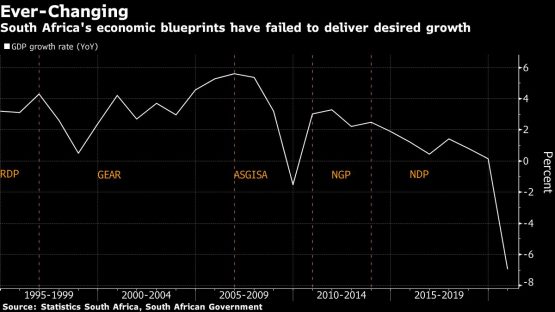 GDP hasn’t expanded by more than 3% since 2011 and output is only expected to reach pre-pandemic levels in 2023. At 32.6%, South Africa’s official unemployment rate is the third-highest among 81 countries and the euro zone tracked by Bloomberg, though some data are for different periods.

Last month’s turmoil could cost the country about R50 billion ($3.5 billion) in lost output, according to the South African Property Owners Association. Economists see the damage shaving as much as one percentage point off economic growth this year.

Only one correction — It has been the worst outbreak of civil violence in South Africa since the dawn of history.

1: Politicians care only about re election. Nothing else matters to them. So if they have to bankrupt the country in the process or risk civil anarchy they will do so without further thought. They will do all to stay elected.

2: There is an inherent contradiction between what is required in SA and the impossible, unobtainable, inaffordable pie in the sky policies of pseudosocialists in the government. It will never, ever happen under ANC rule. The ANC cannot and will not do what is required because they risk the populist vote. Until the govt puts the best people we have (regardless of political affiliation) in cabinet and holds them to account, nothing is going to change and the race to the bottom will continue unabated. Simple example: with a communist in charge of the economy the outcome is 100% predictable in spite of the wordspin and international donor conferences as per the last 27 years.

The outcome for our country is absolutely predicatable, no question in my mind. I am so convinced of this I have bet my pension on it.

He is a BEE billionaire. He has to pay back the money before he will have any legitimacy. If he wants the moral authority to reform the economy, he has to rectify the process of legalized plunder. BEE is the nationalization of 30% of private property. The most damaging example of expropriation without compensation is the 27 year-long process of redistributive municipal rates and taxes. The ANC has painted itself into a corner long ago. The bomb is primed and the detonator is ticking.

Agree but at least the coming election will be an opportunity to vote out the cANCer. Or am I being too optimistic?

No, you are very realistic, the ANC may lose support, but which party stands to benefit? My point is that voters have been expressing their mindset and understanding of economics and the rule of law for the last 27 years. That mindset has brought us to the current situation. Although the name of the ruling party may change, the mindset of the average voter won’t. This implies that to gain votes or stay in power, any political party has to satisfy the communalist mindset.

The voting majority supports the ANC because they actually support communism. Cosatu, per definition, is a communist organization. A democracy simply enables the voter to express his mindest and does nothing to change that mindset. A democratic dispensation is an unrelenting force that equalizes the economy and social stability in a nation with the mindset of the average voter. This force drives the widening difference between the mountainous and landlocked nations of Switzerland and Swaziland.

This is why even the DA is in favour of some sort of BEE scheme, while we all know it is counterproductive and causes unemployment.

You have to be very naïve or just plain stupid to expect any “growth” in the economy from this lot!

No electricity?? SO PLEASE EXPLAIN WHERE TO GROWTH WILL COME FROM????! The IPP program is far to late, too small and most probably just an eye blind.

Don’t even have to mention that the country is “run” (into the ground) by long retired “freedom fighters” / communists with a major union problem.

And please lets not refer to “the most industrialized economy”! Reference should rather be made to the most corrupt country in the world! led by a bunch of diabolical thieves!!

The only reform required is for government and cadres to stop stealing and festering corruption.