Up to a fifth of employees in the private sector did not receive a salary in June – BankservAfrica.
By Larry Claasen 30 Jul 2020  00:02 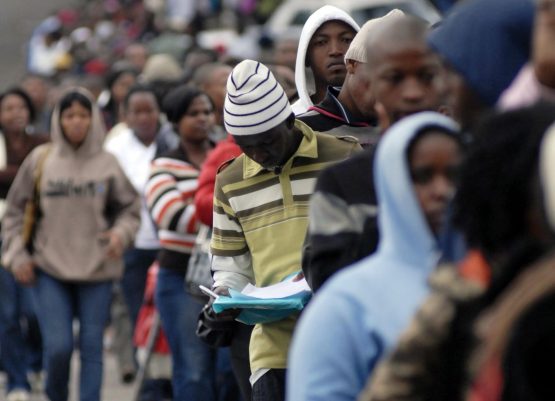 The Covid-19 crisis is taking a toll on employment and remuneration. Image: Rogan Ward, Reuters

South Africans’ wallets are feeling the brunt of the Covid-19 pandemic as monthly take-home pay in June 2020 crashed 20.7% from where it was a year ago.

Data from BankservAfrica, which runs the South African National Payment System, shows that up to a fifth of employees in the private sector did not receive a salary for the period. “The 20.7% decline could be the result of job losses or it could due to a temporary pause in payments,” notes BankservAfrica.

Though the drop was steep, BankservAfrica cautioned that while the salary data couldn’t be used as a measure of the unemployment rate, it could, “in this very unusual time,” nevertheless be a useful indicator of employment on the ground through the number of salaries paid. The data coming out of BankservAfrica is the earliest indicator of the fallout of the Covid-19 crisis on employment as Statistics SA’s latest quarterly employment statistics survey only covered the period to the end of March, so is not indicative of the full impact of the crisis.

The payment processing company warns that the true picture could be a lot worse as its BankservAfrica Take-home Index (BTPI) over-represents payments from civil servant and state-owned entity payrolls. This can be seen in about 30% of the BTPI monthly equivalent payments being paid by the broader government sector, when compared to 21% shown in Stats SA’s Quarterly Employment Survey.

There is a similar story when pensions are included. “The BankservAfrica Private Pension Index (BPPI) declined for the second consecutive month, falling 0.3% to reach R7 355 in real terms.

“Real pensions could be declining as a result of the interest rate falls and as other assets have also struggled.”

The combined decline of 23.5% for total take-home pay and pensions was by far the biggest on record. Despite the scale of the crisis, when it comes to actual average take-home pay, there was only a 0.5% decline in real terms for the period. “This could have been the result of instances where salaries may have increased or that the personal income tax provided relief above the current inflation rate,” BankservAfrica said.

But even if employees got some tax relief, its impact has been muted.

“As the average tax relief is over 5.1%, an increase of 4% in gross salaries on average would have resulted in a 4.2% increase due to this reduction in income tax. Therefore, the 1.7% increase (as reflected in the nominal year on year change in the BTPI) is extremely low.

“Moreover, when inflation declines, as it currently has, real take-home pay increases at a faster rate – it does not decline as it did in June.”

The data coming out of BankservAfrica is not encouraging and it fears the worst. “The numbers are concerning and will have a profound impact on the South African economy. The knock-on impact is also likely to be larger than many have estimated and will have a severe impact on retail sales and consumer spending.”

The oracle of RSA 6 months ago

That’s a massive number , how can the consensus view be that the economy will contract by less than 10% when the salaries are down by 20%.

Meanwhile 7500 people have died (I know the official number is understated).

The point is, we’ve stuffed our response up royally.

More Importantly Govt employees continue doing NOTHING on full salaries:
Even at work the majority are Clueless :

Govt employees will even get increases in a time of Covid-19 – by still doing nothing.

Stats and articles like this are basically worthless because not one single public official incl politicians has lost a job or taken a salary cut. None. These figures has to do with private business and job losses.

This is all part of their master plan. Destroy the economy and then nationalise everything to “save the people”