Sanctions are the economic weapon with a history of backfiring

A look at their emergence as a policy instrument in Europe and their implications today.
By Ben Holland, Bloomberg 29 Jan 2022  22:46

As it threatens Russia with the toughest sanctions yet in the Ukraine standoff, the U.S. is potentially doubling down on a tool it’s used with growing intensity over the past decade or so.

How did sanctions — often criticized for hurting ordinary people while failing to budge the target governments, from Cuba to Iraq and Venezuela –- become so central to foreign policy?

In “The Economic Weapon: The Rise of Sanctions as a Tool of Modern War,” published this week by Yale University Press, Cornell University historian Nicholas Mulder examines their emergence as a policy instrument in Europe between the two world wars.

Bloomberg News spoke to Mulder about that history and its implications today. Following are excerpts from the conversation, lightly edited for length and clarity.

Bloomberg: Your book is about the inter-war years. There seems to be a revival of interest in that era. Do people see parallels with today?
Mulder: There are important parallels. There was already a quite advanced level of economic and financial globalization — that feels very recognizable to us — but also a problem of managing global political stability.

Those arteries of globalization can also become flashpoints for conflict — and weapons, in some ways.

You describe how the early “sanctionists” believed the economic weapon could prevent conflicts. How did that idea emerge?
People were very aware of the prosperity that globalization enables. That’s really what the people who developed sanctions in the aftermath of war used as their starting point.

They modeled sanctions off of the wartime economic blockade. There was a really big memory still present in much of Europe of the deprivation it had caused.

It was a hope of the people behind the League of Nations that they could kind of mobilize that memory — and remind people that if you had any ambitions to change the status quo, you would be faced with this blockade weapon, but now in peacetime. That really was what the economic weapon of sanctions was about.

How did the experiment go wrong in the 1930s?
Initially the hope was a kind of deterrence model, actually quite close to what we’re trying to do with Russia today. In the 1920s, the first few times when the model was tested, it seemed to work.

But there were two things that when wrong when they tried to use this into the 1930s. One was that the Great Depression happened, a really important shock that made countries more inclined towards economic nationalism.

People in the Depression were very concerned with maintaining what little trade was left. They were quite worried about going too far and destroying their own export revenues — a recognizable problem right now for European countries that are heavily dependent on trade with China and Russia.

The other problem was that the countries that started to challenge the Versailles system were much bigger countries in the 30s. Against those quite large economies [Italy, Japan, Germany], it was much more difficult to impose sanctions that would really hurt them.

In the minds of the fascists, this became a sliding scale towards what was ultimately going to be a war against them. It radicalized them more, it made them even more determined in their intransigence. And therefore it really in that sense backfired.

Economies became more autarkic in those years. Could that happen now, for example with curbs on tech exports to China?
The risks are that we’re going to see a world economy dominated by geopolitical blocs, in which technological exchange will be limited. It will make it difficult to deal with collective global problems, whether it’s climate change or international economic coordination, vaccine distribution, that sort of stuff.

The other historical lesson about these export controls on technology — they were actually used against the Soviet Union and China during the Cold War — was that ultimately it’s almost impossible to truly prevent this technology from being shared with your opponents. You can delay but not prevent.

Do sanctions become less effective as target countries insulate themselves?
There are strongly diminishing returns. You can see that most clearly with Russia now.

Russia has already been under quite serious sanctions for the last eight years. It caused a recession, they’ve had to re-stabilize the economy, it carries real costs for them — but they’ve now actually done all this sanctions-proofing.

As a result, the threat has a much-diminished effect, compared to what it would’ve had if we actually had lifted some Russian sanctions in the meantime.

That’s the tricky part, for the people who believe that deterrence is something you can do with sanctions. For that to work, you also need to actually be able to periodically lift them.

At that, the West has proven not as good. There’s a sort of ratchet effect. You can ratchet up the pressure but politically, domestically, it’s almost impossible to ever ratchet the pressure down.

Iran is a good example. The Iran deal of 2015 was an important political step. What they did there was to trade the prospect of sanctions-lifting for concessions. Then Trump tore up the deal. But the U.S. still hasn’t removed any of those Trump-era sanctions. 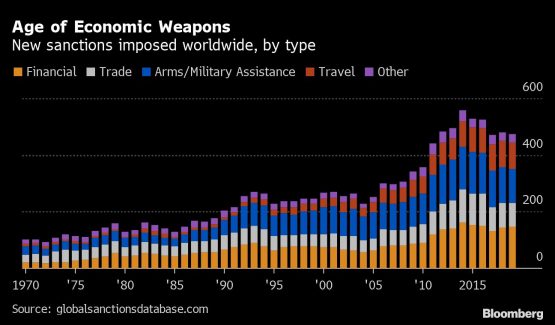 You write that sanctions worked against smaller countries in the early days. Do they now?
I would say that the fundamental distinction is between effect and efficacy. Oftentimes in the debate about sanctions, these two things get confused.

Proponents of sanctions will say “Look, we’ve driven the Venezuelan economy into the ground, Iran is losing all this growth, Russia is really not doing as well as it was.” That’s completely accurate.

But the trick is, can you actually translate that economic and material damage into achieving the political goal that you want?

Many people oppose sanctions on humanitarian grounds. Was that objection there from the start?
Yes, very much. There were many people at the time who were shocked by it.

I found a lot of debates in the League of Nations, and among British and American policy makers where — for example — feminist groups would object to the use of sanctions. They’d write things like: You’re actually targeting the very weakest, these are not the people who support war anyway, you’re not achieving anything by punishing them.

And the response from the sanctionists was to say: Yes, but if we actually agree on a humanitarian carve-out — if we say that we will only impose sanctions on the ruling clique or military elites, for example — then we actually weaken its material effect and therefore its deterrent effect. And only by threatening an entire society will you be able to really instill the sort of terror necessary to force a behavioral change.

John Maynard Keynes was part of that debate. You uncovered some new material about his views on sanctions. What were they?
Keynes emphasized that this instrument had two sides. Sanctions were the negative side, but the positive side was logistical aid and financial assistance. He said he would be far more inclined to lean towards the positive side.

Later on, he did support certain kinds of sanctions, against Italy and Japan for example. He wasn’t always opposed to them. But he said they’re incomplete and they’re going to backfire if you don’t take the other half of the equation into account and work on supporting the weak.

We don’t necessarily have to drop all the sticks of sanctions. But we should definitely work on making the carrots bigger and more attractive. I think that’s the Keynesian lesson.

Sanctions may not prevent wars but they sure as hell make pariahs of the villains when compared to doing nothing. No court, no appeals – the targeted tend not to appear in the US to protest via the courts…

If Putin and his buddy thug thief oligarchs cannot operate like the other wealthy, they are reminded each day. Dozens of Mugabe companies cannot make or receive dollar & euro payments. The Guptas too and hundreds of other villains.

It is interesting that sanctions can still make billionaires of some; Billy Rautenbach and the Rudland family poised to take over Tongaat come to mind.

not sure how they escaped US Treasury, maybe those sanctions were narrow on Mugabe

I once paid a Zim travel company whose name was too close to a US sanction list. US Treasury sat on my intercepted money till we could eventually prove the case.