‘Until herd immunity is reached, future waves of the virus will continue to affect the economy.’
By Thando Maeko 15 Apr 2021  00:01 The Reserve Bank assumes that around 10% of the population will be vaccinated by the end of Q2, slowly rising to 67% by mid-2022. Image: Stephen Zenner, Bloomberg

The SA Reserve Bank released its bi-annual Monetary Policy Review (MPR) on Wednesday, wherein it warns that the economy could be further negatively impacted by the emergence of new waves of Covid-19 infections should the country not reach herd immunity.

The central bank however says the impacts to the economy will likely decrease with each new wave, as the “economy adjusts to its new way of operating and as an increasingly large share of the population develops natural immunity from exposure to the virus”.

South Africa’s economy contracted by 7% in 2020 – its sharpest contraction since the 1920s. The contraction is in line with market expectations following the outbreak of the coronavirus and the subsequent lockdown that was implemented to curb the spread of the pandemic. The economic recovery has been uneven across sectors, with Sarb noting that sectors such as agriculture and mining have rebounded to pre-Covid 19 levels, while sectors such as construction and manufacturing have been lagging behind due to weak demand, among other things. 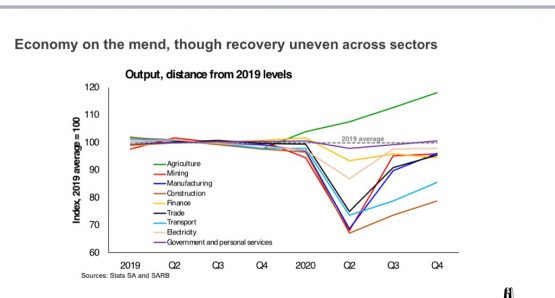 “Unlike most previous recessions, the recovery from pandemic conditions is uneven across sectors, raising the spectre of a K-shaped recovery,” it said.

The growth in GDP is expected to be spurred on by low interest rates and mass vaccination programmes. Last year, the Reserve Bank made drastic cuts to rates (275 basis points) against the backdrop of the pandemic. This resulted in the repo rate being slashed to 3.5% and the prime commercial bank lending rate being at a more-than four-decade low of 7%.

The cuts reduced the real costs of servicing debt for households and firms even as economic activity was curtailed.

In the MPR, the Reserve Bank says the impacts of last year’s policy easing are still filtering through the economy, with peak effects expected later this year.

“These effects should be expected to carry through, as the pickup in mortgage applications suggests. The cuts will linger in the system for some time, boosting growth in the outer period.”

Widespread vaccination is expected to curb the spread of Covid-19, thereby reducing uncertainty and allowing for reduction in disruptions to economic activity. The country’s vaccination rollout has however been marred by disruptions which could cause a rise in infections.

In January the government suspended the use of the AstraZeneca vaccines from the Serum Institute of India, after studies showed that the jabs had minimal efficacy against the dominant 501.V2 strain of the virus that was first identified in South Africa, and which largely caused the second wave of infections.

On Tuesday the health department announced that it would temporarily suspend the rollout of the Johnson & Johnson (J&J) vaccine, following blood clots found in six patients in the United States who had received a single dose of the jab.

Health Minister Zweli Mkhize however is however hopeful that the temporary, voluntary J&J jab suspension will not have a long term impact on the country’s overall vaccination plans.

In the MPR the Sarb said: “A more rapid rollout would quicken the return to ‘normalcy’, particularly for sectors such as travel and tourism. Bringing tourism and transport back to full activity levels would raise the economy’s potential growth (a reversal of the adverse supply shock to these sectors).”

During the MRP release, Sarb Governor Lesetja Kganyago said the successful rollout of the vaccine will likely have a positive knock-on effect on the recovery of the global economy.

“What is going to be protecting us … is getting those vaccines going, as you could see that when you experience any optimism about the rollout of the vaccines globally … we saw global sentiment also changes,” he said.

“For the global community what you need is a faster rollout of the vaccination so that you could actually achieve global herd immunity, because what is clear is that if you protect some and not the others the virus mutates. As it mutates it becomes more difficult [to deal with].”

Our leaders are delusional. There will be no 3.8% growth rate in SA. You can diddle fiddle whatever with this statistic. Even with number manipulation at very best it will be a 3.8% recovery not growth.

Bloomberg reports that Ebrahim Patel’s department refuses to sign off to recognise Aspen’s huge investment in the manufacturing of the J&J vaccine. As a result the sale of 20 million vaccines have been put on hold.

This means, in contemporary SA terms, that the glorious governing party wants to hijack the vaccine procurement to enrich connected cronies.

The US suspension of the J&J vaccine roll-out – because of six adverse reactions in six million cases – is now used as a pathetic excuse.

As a Staunch communist Patel would never care about the lives of ordinary SA citizens. He is a commissar, vaccinated and the lumpen proletariat must do as he says and take their chances. Viva Stalin.

The medical profession have sold out to political and financial threats which have rendered them into the status of just another enemy of truth and whatever their fading fake oath of righteousness was ever worth.
This leaves the door open to the deified Reserve Bank to be subjugated into a substitute for any previous knowledgeable entity in the technicalities of this humungous money making subject. As such they will glibly represent the interests of those that will profit at the cost of the taxpayer that underwrites them (and whose best interests they are supposed to be serving).
This extraordinary stretch of anything ethical or sane is delivered so smoothly to the farmyard electorate classes that the lubricant must have been invented by the devil itself.