The South African Reserve Bank cut its benchmark interest rate by the biggest margin in more than a decade to support an economy that’s set to contract for the first time since the global financial crisis.

The bank’s five-member monetary policy committee unanimously decided to lower the repurchase rate to 5.25% from 6.25%. That was bigger than any of the 21 economists surveyed by Bloomberg projected.

The aggressive decision is fully justified given the “very real growth threat” that South Africa faces, Razia Khan, chief economist for Africa and the Middle East at Standard Chartered Bank, said in a emailed note.

These charts show some of the data that influenced the central bank’s decision: 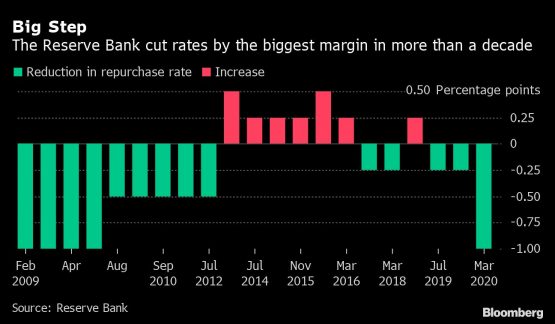 The magnitude of the cut is aimed at easing financial conditions in the face of the novel coronavirus and improving the resilience of households, but monetary policy alone can’t help South Africa’s economy, Governor Lesetja Kganyago said.

Disruptions to supply chains and normal business operations, and expected weaker demand for exports and domestic goods and services mean Africa’s most-industrialised economy won’t emerge from a recession any time soon. The central bank said the economy will contract this year and it cut growth forecasts through 2022, when it sees expansion at only 1.6%. This year will be the first time since the global financial crisis that the economy shrinks on an annual basis. Still, the Reserve Bank’s forecast of a 0.2% decline is “woefully optimistic,” said Jacques Nel, an economist at NKC African Economics.

“There is scope for further monetary stimulus given current interest rate levels, but this would have to be accompanied by an unfathomable shift in policy — specifically related to state-owned companies and the energy sector — and a faultless response to the domestic coronavirus crisis in order to generate” an outcome anywhere near the central bank’s forecast, he said.

Nel sees the economy contracting by 1.8% this year. 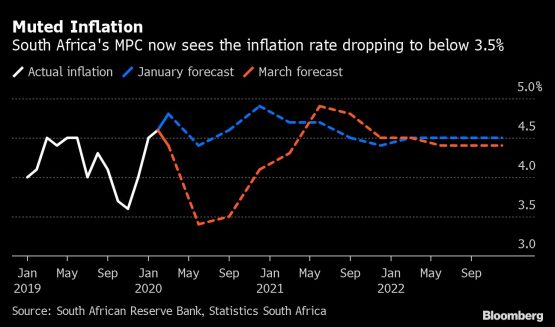 Consumer-price growth is expected to average 3.8% this year, which is well below the 4.5% midpoint of the bank’s target range at which it seeks to anchor inflation. If realised, it would be the annual lowest rate in 15 years.

Headline inflation could even breach the 3% lower bound of the central bank’s target after oil prices slumped below $30 per barrel, Mpho Molopyane, an economist at FirstRand Group’s Rand Merchant Bank, said.

“We expect the South African Reserve Bank to cut further by 0.5 to 0.75 percentage points by the end of the first half of 2020 as the high frequency data gives a clearer picture with regard to the actual impact of Covid-19 and continued low oil prices on GDP and inflation,”she said.