January 1’s minimum wage increase not expected to make much of a difference.
By Palesa Mofokeng 25 Jan 2022  00:04 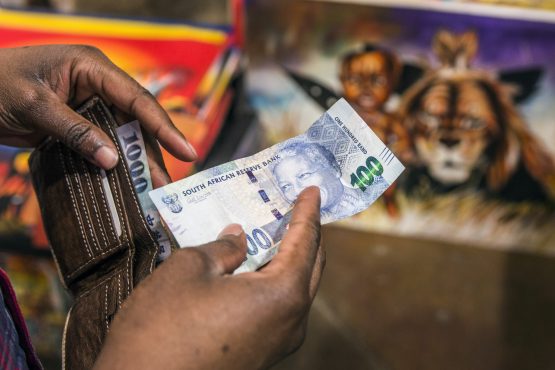 The cost of living in South Africa keeps going up and the basics are likely to continue to be unaffordable for many despite the 4.7% increase in the minimum wage, according to analysts at e-commerce company Picodi.

In the research, which looked at whether minimum wage rates can ensure a minimum standard of living in a given country, South Africa’s minimum monthly wage rose from R3 555 to R3 722 (net) as of January 1.

Covering 64 countries, the study ranked South Africa 36th among countries that saw an increase in minimum wage. It also found that a worker can live off the minimum wage as the value of basic food products at the beginning of 2022 is R1 340.

This means the cost of basic food – which may include items such as bread, rice, milk, meat, cheese, fruit and vegetables – for one adult per month accounts for 36% of the net minimum wage.

Read: Minimum wage: a burden or lifeline for the economy?

In terms of affordability – the ratio of basic products to the minimum wage – South Africa ranked 48th out of the 64 countries as overall product prices potentially absorb 36% of net earnings.

“Obviously any increase is something to celebrate, given the economic circumstances. If it’s enough to sustain [an individual] that’s debatable,” says FNB agricultural economist Dawie Maree.

“If you look at [consumer] inflation, it’s more than that, the recent [figure] is 5.9%. But I think what is more concerning is, for example, transport costs with the rise in fuel prices last year and an increase in electricity costs.

“For the lower end of the economy, I’d say more than 60% of the expenditure goes into the food basket … And for a general worker, that’s not sustainable to keep up with the living expenses and the increases in those prices.

“We are actually getting poorer and poorer in terms of our disposable income in South Africa,” he adds. The increase may be welcome, but data from the Pietermaritzburg Economic Justice and Dignity Group (PMBEJD) lays bare the brutal reality of affordability in this country. For instance, the average cost of a household food basket in South Africa in November 2021 was R4 272.44.

The average cost of the PMBEJD Basic Nutritional Food Basket for a family of four is R2 921.36. Based on this data, families will have a food shortfall of 46.3% (-R1 352,94) if all the remaining money after transport and electricity went to food.

“We have seen that the affordability thresholds of households to secure their very core survivalist needs of transport, electricity, food, domestic and personal hygiene products, educational expenses, school clothes, books, and socks, warm blankets and safe homes have long ago been breached,” warns the PMBEJD.

“There comes a time where the gap between what financial resources families can gather, and the costs of goods and services becomes so large that even moderate to substantial decreases in the cost of food – amongst other critical expenses – really makes very little difference in the lives of millions of South African households.

Economist at economists.co.za Mike Schüssler says that although affordability is a problem, many can still survive and manage to take care of their day-to-day needs.

“Many people get grants such as child grants, which adds another R700 to the total at least … Also, if both adults can work that also makes a major difference or at least one more adult with a side hustle to add [to] the kitty,” he point out.

“Most poor [people] have electricity for free and water too. Trains before they were destroyed were [a] very cheap form of transport. There is very little the poor pay in educational expenses other than uniforms.”

On January 4, the Department of Employment of Labour called for comments on a new minimum wage target for 2022, with the NMW Commission indicating that the current rate of R21.69 per hour should be increased by 1% above CPI inflation.

This would take the country’s minimum wage to about R23 an hour.

Real wages, that is the purchasing power of wages, have been in a slow and steady decline in the USA since 1971. An increasing number of people have to take up 2 or three jobs to get by. The average wage can no longer buy what it could easily afford in the ’60s. Households go deeper into debt to finance the shortfall.

So, we have to ask, what happened in 1971 then? This was the year when President Nixon unilaterally ended the convertibility of the dollar into gold. America has defaulted on its loans. Since then, there were no constraints on the devaluation of the currency. They simply issue bounced cheques to pay the bills.

This is where we have to pay attention now. Currency devaluation impoverishes the majority, while it enriches a small minority. It is a mechanism that stealthily transfers purchasing power from lenders to borrowers, from workers to the owners of capital, from laborers to investors, and from retirees and receivers of social grants to banks and financial intermediaries.

We are living in the goldilocks age of financial engineering where everyone has access to money. There is enough money to even give some of it away to people who contribute nothing to the system. The demands for social security, free services, national health insurance, and minimum wages keep on growing by the day. A career politician will commit political suicide if he advocates austerity measures, so they simply find a way to create the money. The process of money creation is part of an exchange of something for nothing. The inherently worthless new paper circulates alongside the old paper and buys the same real assets, commodities, and services. Socialist voters support this process because they demand to get something for nothing. They contribute less than what they demand from the economy.

The government does not have any money of its own. Only economic activity can create value. Therefore, all social projects and the minimum wage are essentially funded by the beneficiaries themselves, through the loss of the purchasing power of the benefit. The government robs Paul to pay Paul.

This brings us to the point. The minimum wage and the social grant are not supposed to be sufficient, because the real beneficiary isn’t the retiree or the worker. The real beneficiary is the 0.1% of the population who owns assets that increase in value as money loses purchasing power.

We should also consider the fact that the cost of labor during the period of legal slavery was more or less double the cost of the current minimum wage. This is the effect of socialist laws. The same government that sets the minimum wage for some citizens, at the same time and with the same instrument, creates mass unemployment for the majority.