According to Stats SA, manufacturing is one of the industries that led GDP growth in the first quarter of 2022. Image: Siphiwe Sibeko, Reuters

In its routine release of the country’s quarterly gross domestic product (GDP) figures on Tuesday, Statistics South Africa (Stats SA) reported that economic growth in the period recovered to pre-Covid-19 levels with real GDP valued at R4.61 billion, slightly higher than the R4.56 billion recorded in the first quarter of 2019.

The improved economic performance this period was led by growth in the manufacturing as well as the trade, catering and accommodation industries.

However, the construction and mining industries both registered contractions of 0.7% and 1.1% respectively. 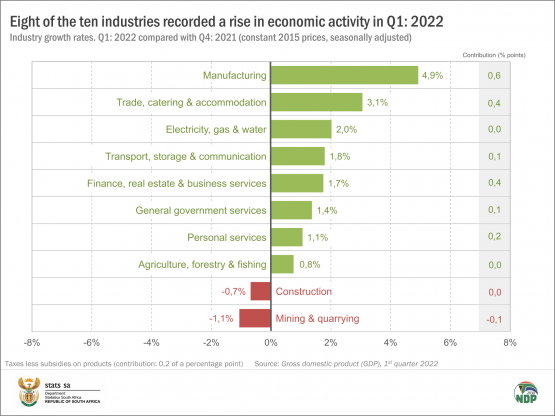 With the country’s unemployment rate for Q1 2022 at 34.5% – slightly lower than that seen in Q4 2021 of 35.3% – there is more pressure on government to push for much higher levels of economic growth that will create more jobs.

Read: SA’s unemployment rate declines for the first time since 2020

“This poor performance from the mining sector is largely unsurprising, given that mining output in Q1 2022 suffered interruptions from heavy rainfall and industrial action,” she says.

“Looking ahead to Q2 2022, the general economic outlook looks clouded due to the  slowdown in economic activity in SA’s key trading partner countries due to the ongoing war in Ukraine, as well as lockdown restriction (although now easing) in China.”

The state of the country’s economy is further seen in the recorded rise in new investments during the reporting period.

Delport tells Moneyweb that the improved GFCF figure is something to smile about, as it indicates that the country’s economy is moving in that right direction for growth.

“It essentially means that there is more investment running to the economy – whether coming from the local front or global – it basically means there are people out there who are willing to run more money into the South African economy. Which would really mean that they have a belief that we are actually going to go somewhere in the future,” she says.

However, Stats SA did note that there was a R4 billion drawdown of inventories during the period. Contributing to these drawdowns was the decrease in trade and electricity.

Hammering down on growth

Read:
Supply chain pressures now worse than during Covid-19 peak – PwC
Eskom: De Ruyter has a plan up his sleeve

As the recent KwaZulu-Natal floods occurred outside of the reporting period of Q1, the impact will be seen in the Q2 figures.

Data collected by the Department of Trade, Industry and Competition shows that more than 800 companies were impacted by the floods, causing about R7 billion worth of damage in the province.

According to KZN Premier Sihle Zikalala, the floods – which took place at the start of April – affected more than 30 000 jobs in the province. Car manufacturer Toyota is just one of the major companies which had to enforce a temporary closure at its Prospecton production plant.

Toyota South Africa Motors (TSAM) said at the time that the closure would last for at least 12 weeks, as the plant tries to recover from the devastating impacts of the floods.

Read:
A ‘mountain of repairs to be made’ – Toyota SA CEO
Toyota’s flood damage: CMH says production down for at least 12 weeks

Delport tells Moneyweb that although economic growth in Q1 came in higher than expected, the continuing conflict in Eastern Europe, the Covid-19 related lockdown in China, rising fuel and food prices, intermittent load shedding in South Africa and the wage strike at gold miner Sibanye Stillwater, will all play a role in the economic slowdown expected in Q2.

Delport adds that considering all of this, Anchor Capital expects 2022’s yearly growth to average at about 1.7%, in line with the South African Reserve Bank’s forecast.

Momentum Investment in its forecast of yearly growth came in slightly higher at 1.8% , citing similar reasons.

That must be a real decline of at least 7%.

A dung beetle that collects 1.9% more dung is still in the dung.