Government to take the second round of projects to market for funding.
By Roy Cokayne 8 Sep 2021  00:01 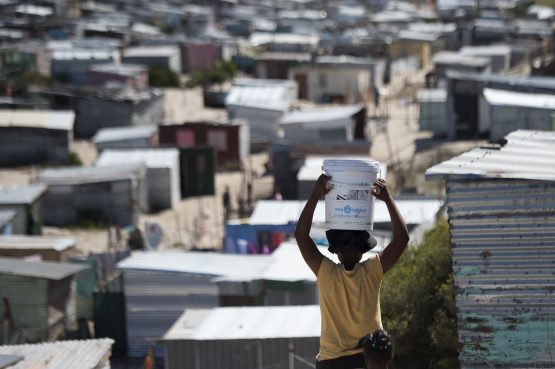 Government is creating the ‘crowding-in effect’ in infrastructure investment by the private sector. Image: Rodger Bosch/AFP via Getty Images

“A number of projects introduced as part of our Economic Reconstruction and Recovery Plan [ERRP] have kicked off and are in construction, providing much-needed jobs for our people,” De Lille told the National Council of Provinces (NCOP) on Tuesday.

The Infrastructure Investment Plan is the cornerstone of the ERRP announced by President Cyril Ramaphosa in October 2020.

However, the slow awarding of tenders for the projects, with the exception of awards by the SA National Roads Agency (Sanral), has been criticised by a number of industry organisations, including the SA Forum of Civil Engineering Contractors (Safcec) and Master Builders South Africa (MBSA), as well as analysts and other industry stakeholders.

The government in July 2020 unveiled and subsequently gazetted the first tranche of 50 Strategic Integrated Projects (SIPs) and 12 special projects that have been fast-tracked to stimulate the economy post Covid-19.

It also announced that it was able to raise R340 billion from the market, including international and local finance institutions, for some of these projects to reduce the reliance on the fiscus.

De Lille said on Tuesday that in four weeks the government will be taking the second round of infrastructure projects to the market for funding, with the Sustainable Infrastructure Development Symposium (Sidssa) taking place in October 2021.

Details to be announced at Sidssa

Zara Nicholson, media liaison officer to De Lille, said after the presentation that the list of projects and their value is still being finalised and will only be announced by Ramaphosa and De Lille at Sidssa next month.

De Lille told the NCOP that as more projects come on stream and the government gathers pace on its infrastructure development, “we are sure to see the benefits in our economy and on jobs”.

“Through the development of infrastructure, the foundation has been set to thrust us forward to a brighter future.

“Infrastructure development by government is an important signal to the market that we are creating a conducive environment for investment and job creation by the private sector,” said De Lille.

“By leading the way with infrastructure investment we are creating the crowding in effect by the private sector and together we will revive our economy and build it back up, better.”

De Lille said other infrastructure projects that are part of the government’s National Infrastructure Investment Plan include:

De Lille provided the NCOP with an update on some of the 62 first-tranche projects from all three spheres of government, state-owned entities and the private sector that were gazetted last year as part of the government’s SIPs in line with the Infrastructure Development Act of 2014.

“This means these projects are being prioritised for implementation and can follow an expedited path to delivery with set and shorter time frames for regulatory processes,” she said.

Among the projects she highlighted:

Excuse my cynicism, but given the ANC governments track record, it safe to say the main aim of these schemes are to divert more taxpayer resources to crooked politicians and their families. You can bet your bottom dollar that all of these schemes will be net negative to the SA economy.

I occasionally see some of the prices for the smaller projects mentioned; the bridges in KZN for example. They are horrendously high with only KZN DoT bidders getting through.

and you – no doubt – are an expert in bridge pricing. Thnks

When they serve you lemons … invest in PPC

The cadres must be licking their lips..