President says the country is on a path of removing impediments and constraints to inclusive growth.
By Mike Cohen and Manus Cranny, Bloomberg 6 Nov 2019  11:23 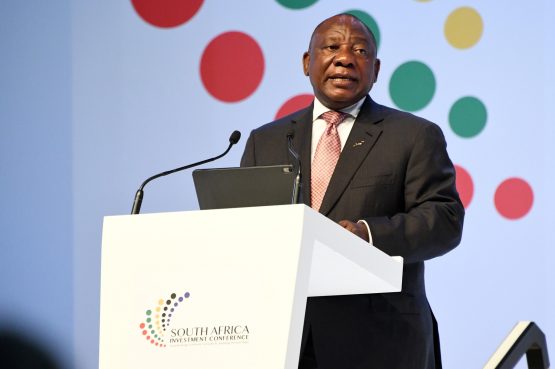 President Cyril Ramaphosa says a new Eskom CEO will be announced in the next few days, and the board will also be revamped. Image: Siyabulela Duda

South African President Cyril Ramaphosa said his administration is on track to lure $100 billion in new investment within five years, with more than $16 billion already committed and many more projects in the pipeline.

With the economy stagnating, unemployment that’s stuck at about 30% and the country in danger of losing its sole investment-grade credit rating as the state’s finances deteriorate, Ramaphosa needs an injection of new capital to shore up growth. His campaign got off to a good start in October last year when an international investment conference secured pledges that helped push inflows to a five-year high.

Of the 31 projects that were previously announced, eight have been completed and 17 are under construction or at the implementation stage, Ramaphosa said at a follow-up investment summit in Johannesburg on Wednesday.

“We want growth in our economy and we are putting a number of measures in place to correct what business people have said are the impediments and constraints that are holding growth back,” Ramaphosa said in an interview with Bloomberg Television at the gathering.

“Investors had seen our country sliding down, bedevilled by corruption, by state capture,” he said. “We have corrected that and state capture is now being dealt with. We are now focusing on creating that investment climate and environment for them to invest.”

Investment pledges announced at the conference include:

Despite the uptick in investor interest, the National Treasury projects Africa’s most-industrialised economy will expand an average of just 1.5% over the next three years as electricity shortages constrain output. Lower-than-expected growth has curbed tax revenue, causing debt and deficit levels to soar, and Moody’s Investors Service has warned it may downgrade its assessment of the nation’s debt to junk unless urgent action is taken to turn the situation around.

The government is committed to taking the necessary measures to stabilise its ratio of debt to gross domestic product, and restructure struggling state power utility Eskom Holdings. It’s held productive talks with labour unions over what needs to be done, and a new chief executive officer will be appointed within the next few days, Ramaphosa said.

“We don’t have to be dramatic to get things done. We’ve got to work together with our partners,” he said in the interview. “Of course people want dramatic events, they want bones to be broken, they want heads to be smashed. We are saying in this country we have done things a lot better by building consensus and working together.”

Anglo American chief executive officer Mark Cutifani said his company invested R15 billion in South African mining projects in the past year and is committed to expanding output at its key platinum mines. While South Africa remains Anglo American’s best operating area in cost terms, more needs to be done to improve the business environment and certainty of power supply, he said in a panel discussion at the summit.

Phuthi Mahanyele-Dabengwa, the CEO of Naspers’s South African unit, said her company also sees scope to invest and expand more in the country but continued to encounter regulatory hurdles.

The Congress of South African Trade Unions, the country’s largest labour group and a ruling party ally, said while efforts to attract new investment were laudable, the government and business had been “very lethargic” in implementing decisions taken at previous summits.

We,ll done mr President, but what is the status with the no. 1 ESKOM priority? This 1 tiny issue can destroy SA (“junk status”).

(Ps: please do not give Eskom management space to sort out the mess; they failed to do it year after year. It needs drastic intervention that may make you very unpopular, but save the nation).

Every now and then, there is the odd glint of optimism in the air…
There is certainly a great deal of emotion & willingness being construed through public relation addresses, by those in the political realm.

Unless the current sentiment surrounding “Ruggaphoria” persists beyond the coming festive season. It’s not possible to convince anyone that enough, meaningful measures have taken place for confidence in dealing with the economic turnaround and SA’s many crises in general.

These times are great for moving more money offshore.

NHI, EWC, RET and other bizarre policies are the still the ANC part line. Or are they all forgotten now after the election, like etolls?

Exactly, EWC will shackle this place like no other threat, implement it now, so its over and we can all leave, talking about it makes our money leave, OR KILL it, so we don’t have to consider leaving…

As explained today by CR it is R1.2 trillion at 2018 exchange rates.

In today’s money that is R1.5 trillion.

So after the R300 million investment in 2018 we now still need R 1.2 trillion. That’s the same as what we needed when we started.

Also thousands of jobs were created yet the unemployment rate is worse than what it was a year ago.

WHY does the ANC govt has to “RAISE” or “drive” investments in the first place??
Why not create the political climate to ATTRACT investments?? (Then Govt will not need to spend on various programmes to improve economy….just allow the private sector investments do its capitalist thing. Without being hamstrung by silly laws. Capitalism will create prosperity. It won’t cost govt a cent.)

What we see today, is the CONSEQUENCE of decades long anti-business rhethoric from an ANC pro-socialist stance. Stop interfering with the private sector & things will improve!)

Do NOT RAISE/DRIVE investments! Instead, ATTRACT it!!

that word – lure – says it all. come into my parlour said the zupta to the loot..

Guys have you not read this….Ratings agency S&P Global has issued a stark warning to SA, suggesting there is a risk of further downgrades for the country in two weeks’ time.

“The next big announcement will be on November 22. There will certainly be a very controversial committee discussion because at this point we have a new medium-term budget policy statement (MTBPS) with a lot of bad news but with very little action or action plan.”

His comments come just after Moody’s Investors Service downgraded the country’s outlook to negative on November 1, citing a lack of action by the government to address increasing state-owned enterprises’ (SOEs) debt, high unemployment, and a deteriorating fiscal position.

Moody’s said on Friday that there is “rising concern that the government will not find the political capital to implement the range of measures it intends, and that its plans will be largely ineffective in lifting growth”.

S&P Global downgraded the country to junk status in 2017. Reuss was asked on Wednesday what predictions he had for the meeting in two weeks’ time. He emphasised that the ratings will be determined by “a committee”, but said “look at the data we have”.

He also said that unless the government takes action to improve structural risks to the economy, it could face further downgrades. “It will be a very difficult conversation unless an argument can be made that government will take convincing measures … The risks are clear on the downside.”

Reuss warned that it takes a long time to come back from being downgraded to junk. He said the “weighted average length of time is seven or eight years”, adding that the worst case was Indonesia, which took 20 years. “SA today still has a long way to go back to [S&P Global] investment grade.”

How can you expect anyone to invest when Eskom isn’t sorted out?More investment means more electricity to be used?

The ANC reminds one of the traditional leaders – who – with the greatest dignity, just sit and talk and expect that progress happen by itself.