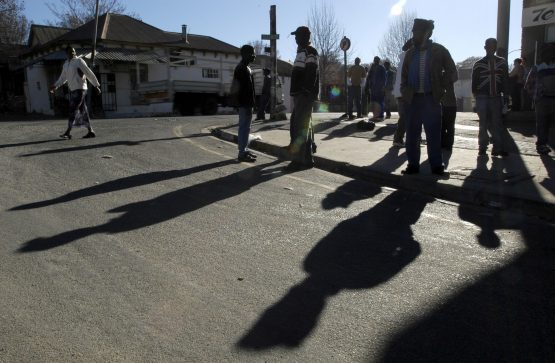 Image: Naashon Zalk/Bloomberg News.
South Africa’s unemployment rate fell for the first time in seven quarters as the manufacturing and mining industries added jobs to meet demand for commodities stoked by Russia’s war with Ukraine and the government employed more people through its public-works program.

The jobless rate fell to 34.5%, from 35.3% in the final three months of 2021, Statistics South Africa said Tuesday in a report released in the capital, Pretoria. That’s the first drop since the second quarter of 2020, when job seekers were hindered by one of the world’s strictest lockdowns to slow the spread of Covid-19.

The median of four economists’ estimates in a Bloomberg survey was 35.4%.

Unemployment according to the expanded definition, which includes people who were available for work but not looking for a job, fell to 45.5% from 46.2% in the fourth quarter. The drop was also partly due to improved response rates among those with jobs in metropolitan areas after the statistics office resumed face-to-face interviews and increased publicity for the quarterly unemployment survey. Response rates climbed to 64.7%, from 44.6% in the previous quarter, according to the agency.

The response rates haven’t yet reached pre-virus levels and “therefore data users are still advised to use some estimates with caution,” Statistician General Risenga Maluleke said.

“They used to move roughly in lockstep albeit with a spread,” he said. “Now the quarterly labour force survey has become much more volatile.”

South Africa’s official unemployment rate remains the highest on a list of 82 countries monitored by Bloomberg — though some of the data is outdated. Strict labour laws, stagnant productivity, bureaucratic hurdles and a skills shortage have reduced the ability of South African companies to hire additional workers.

The recovery in the unemployment rate may be short-lived as a record number of electricity outages forecast for this year, the worst flooding in almost three decades in the eastern KwaZulu-Natal province in April, a slowdown in global output, rising interest rates, and surging fuel and food prices caused by extreme weather and the war in Ukraine are likely to weigh on economic growth and job creation.