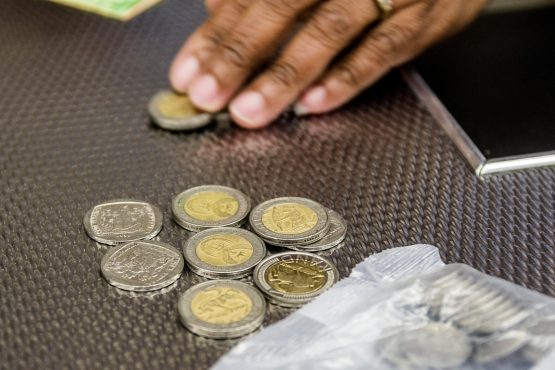 In real terms, the amount of debt accumulated by households has increased at the same rate as inflation. Image: Waldo Swiegers, Bloomberg

South Africans are a lot poorer than they were five years ago due to high debt and low income, with the result that many are struggling to acquire assets such as cars and property.

The real value of household assets decreased by R240.9 billion between Q2 and Q3, to R8 381.9 billion – despite households increasing their savings to pension funds and retirement annuities.

Read: Too many South Africans are slaves to debt

Consumer assets consist of the combined values of their savings in pension and retirement instruments, financial investments and residential properties.

This is despite consumers saving more money in pension funds, which under normal circumstances should have contributed to an increase in the real value of their assets. 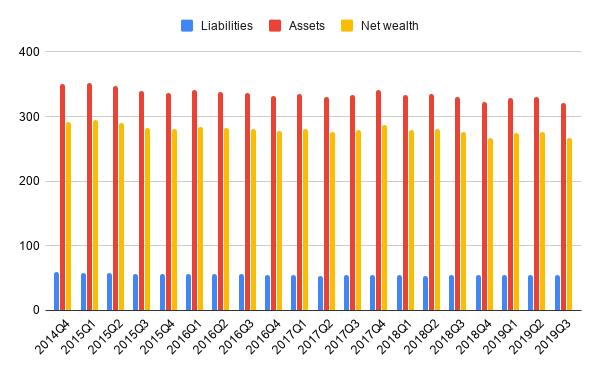 As the real value of households’ outstanding liabilities increased less than their gross income, the ratio of their liabilities to gross income declined slightly from 54.4% in Q2 2019 to 54.2% in Q3 2019.

Johann van Tonder, researcher and economist in Momentum’s consumer insights division, says this is because a lot of households are using their salaries mostly to pay off debt, leaving very little money to acquire wealth or even save.

“What this means is that the bulk of households in SA will not have enough saved by the time they have to retire. So this puts an additional … burden on the government because there will be more people in need of grants.”

Van Tonder says this means South Africa is faced with a double problem, with “the value of assets not growing and the economy also not increasing”.

Consumer liabilities include outstanding credit such as housing, vehicle- and personal loans as well as credit card debt and outstanding municipal accounts.

The latter decreased, with National Treasury reporting that households’ outstanding municipal debt amounted to R111.3 billion in Q3 2019 (Q2: R115 billion). This was however mostly due to municipalities writing off debt considered not recoverable.

Read: Drowning in debt and much more to come

It seems consumers are at least aware of the problem and have made an effort to stop using money they don’t have:

Real outstanding mortgages increased at the slower pace of 0.3% in Q3 (0.6% in Q2), while outstanding instalment sales credit decreased by 0.3% (following a decline of 0.2% in Q2).

However in real terms, the amount of debt accumulated by households has increased at the same rate as inflation in the past five years.

“Our assets are less than … they were in 2014,” says Van Tonder, adding that we’re a lot poorer than we were five years ago.

Van Tonder says international events such as the trade war between the US and China increased fears of an economic recession and further explains why household wealth declined in the third quarter of 2019 – because most of their financial assets are invested at the JSE.

Other factors contributing to the loss of household wealth include domestic issues such as Eskom and the precarious electricity supply situation, issues around state capture, and the weak local economy.

Listen to Eleanor Becker’s interview with Crue Invest director Gareth Collier:
Get access to Moneyweb's financial intelligence and support quality journalism for only
R63/month or R630/year.
Sign up here, cancel at any time.

We hear a lot about debt. Now tell us what the debt is for please.
Is it for houses, cars, TV sets, household items, food, medicine?
What are people making debt for?

Now, blaming debt on poor salaries and not mentioning poor budgeting from the debtor is just shifting the responsibility to something else.

I completely agree. The order in which the author list assets in the first sentence “struggling to acquire assets such as cars and property” is the exact reason why we have a debt issue in this country, buying things they cannot afford with money they do not have to impress people that do not care.

Eish!
So to avoid debt you must be paid a “living wage”?
I agree – you have to make do with what your income is. Borrowing is not a long term solution.

Sounds like individual debt is a microcosm for SA government debt. No surprise really.

The question is who is taking after whom?

All of us (every South African citizens – even the 10m illegal immigrants) are getting poorer due to the abysmal track record of the ANC when it comes to governance.

the good news…. the ANC government also about R 120bn less to plunder.

South Africa, as a country have no will to live… It does not matter whether we are ANC or DA, the will to live is gone. Why don’t we all leave this country. Go to Australia maybe life will be better there…..

You should stop smoking the private stash boet.

I wish there was something different we can all smoke… in the absence of sanity a country will die.

“There is something wrong with South Africans as a whole.” Yep … and the prime “something wrong” is why the ANC gets repeatedly voted in.

There is no alternative for the majority… Sickness No1.
Who ever takes over will do the same if not worse… Sickness No 2.

Do you want more “why’s”? … unfortunately I don’t want to spoil the weekend.

Low income is debatable concept but its not the reason people are poorer. People are poorer because their income get overwhelmed by the rapid and continual increase in the basic cost of living.
The reason everything keeps getting more expensive and the speed at which it does so is purely and exclusively the result of the ANC’s incompetence.
If costs deflated or at least slow down the rate of increase, incomes have a better chance of catching up.