Sustainable growth can only come from being globally competitive.
Patrick Cairns 11 Mar 2019  00:32 South Africa's trajectory has decoupled from what is happening globally. Picture: Simon Dawson/Bloomberg

South Africa’s economic performance over the last few years has been, at best, underwhelming. Earlier this month, Statistics South Africa confirmed that the economy grew just 0.8% in 2018, after 1.4% growth in 2017.

Even in isolation, these are not appetising numbers, but economist Dave Mohr, chief investment strategist at Old Mutual Multi-Managers, believes it’s important to put them in context.

The last time South Africa enjoyed a sustained period of GDP growth above 5% was in the 1960s. More recently, the country saw higher growth in the 2000s, of above 4%.

“Both of these periods had strong links to commodity prices,” Mohr points out. “In the 1960s, it was as the Free State gold fields came on line. In the 2000s we had an enormous commodity boom, when everyone started fearing that China was going to use up all the commodities on our planet.” 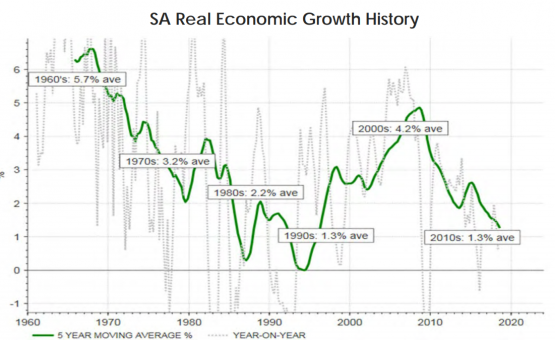 The current low-growth environment is, unfortunately, not exceptional.

What is perhaps of greater concern is that South Africa’s trajectory has decoupled somewhat from what is happening globally. “Over the last 20 years there has always been a good correlation between global growth and South African growth,” Mohr points out. “But unfortunately, over the last three quarters of a decade, we have been underperforming.”

Broadly speaking, the main reason for this is South Africa’s declining competitiveness. At a high level, this is illustrated by the graphic below, which shows demand-side spending in the local economy. The most concerning thing about this picture is export performance.

“You want export revenues to grow faster than domestic inflation so that the real incomes of our exporters are growing,” says Mohr. “Since 2014 there have been periods when exports have grown faster, but on balance not much faster than inflation. That shows you that, in terms of competitiveness, we are not improving.”

This is despite what has happened to the rand.

“A weaker currency should boost rand incomes of our exporters, but it’s failed to do that even though it has gone from R10 to the dollar to R14 to the dollar,” says Mohr. The same conclusion can be drawn from looking at what percentage of total demand in the local economy is produced locally. This too has been in decline.

‘If you are failing to meet the demand in your own economy, it means you are not competitive in the global world,’ says Mohr. ‘That is one of the fundamental problems of our economy.’

As the chart below shows, more than a quarter of local consumption is now sourced from outside the country. “At the beginning of the previous decade about 20% of our demand was satisfied from offshore,” Mohr points out. “It is now 26%. That is 6% of the total economy we have lost. This is damning evidence that SA is not competitive.”

This is the key factor that needs to be addressed for South Africa to prosper going forward. For the economy to grow at sustainably high rates, domestic consumption will never be enough on its own. After all, South Africa makes up less than 0.5% of the global economy.

It’s worth noting that the high growth rates the country experienced in the 1960s and the 2000s were due to exports, even though these were commodities. That shows that export performance is the predominant driver of economic growth.

This will always be the case simply because there is a far, far bigger market outside of the country’s borders than inside them. To change this country’s growth trajectory, steps therefore have to be taken to create an environment in which local businesses can compete in the global marketplace.

‘Exports, for any economy, are by far the biggest potential source of demand,’ says Mohr. ‘If you look at countries that have been successful in substantially lifting economic growth over time, they all have one common factor: they have tapped into global demand.’

Simply put – this seems to be the new normal.

The import propensity graph isn’t dissimilar to our USDZAR graph. We have a lot to sort out.

Quote,
A weaker currency should boost rand incomes of our exporters, but it’s failed to do that even though it has gone from R10 to the dollar to R14 to the dollar,” says Mohr.

Owners of a million Rand then will get a lot more dollars in exchange today. Thanks to a strong currency.

“Sustainable growth can only come from being globally competitive.” I happen to disagree. SA simply cannot be globally competitive except maybe in a few niches (say specialist agricultural products which the Cyril ANC is doing its best to either steal or stymies). I suggest SA’s external income should come from being a gateway into Africa and providing goods and services into Africa. The rotten ANC should do its best to stabilise the African countries SA trades with rather than propping up, protecting and trying to emulate their corrupt regimes while servicing their floods of refugees from our taxpayers.

Unlikely under the blinkered self interested thieves we call “government”.

“Sustainable growth” being the key word. In his well-known book, RW Johnson points to AA/BEE labour laws as one of the (4 or 5) major growth constraints of SA. He said “no western economy can ultimately survive that”. Hard-hitting words, although many of us Saffas put our heads in the sand, not realising what it will imply long-term (…we all WILL get slowly poorer as the haves carries the financial cost of AA/BEE/Corruption for the have-nots.)

BBBEE/BEE/AA/Transformation is the elephant in the room as to why SA will continue to be less and less globally competitive in future (and we already slipped in various global scorecards the past decade or more.) Pity the Govt post-94 did not prioritise quality basic-education for the people that really needed it, but instead the transfer of wealth by various laws, were much easier to achieve quickly. To keep ANC in power off course (effects of education would’ve had too slow results). SA citizens/taxpayers will pay dearly for this policy mistake.

S’Africans will need to realise, to maintain a western, industrialised lifestyle, will become impossibly expensive over time. So expensive, that SA society will not be able to afford it…which will manifest itself in a broken, or intermittently-working state and society. Resembling the mean-average of Africa.

But please don’t be alarmed. The ship will sink very slowly. Every African country has it’s own sad story post-colonial times. SA is currently writing our chapters to our own story book…..and hopefully one day SA will serve a useful purpose of providing other western societies the benefit of adding SA to the available basket case economic studies.

Yes agreed, South Africa is highly unlikely to have a complete collapse but will gradually become more like Tanzania and less like Australia. The modern, Westernised areas will become a smaller and smaller part of the country (by proportion of population and geographic size) but will likely never disappear.

This is already happening…the countryside and many towns are already almost entirely 3rd world without much of a formal economy or property market.

And already today we see national comparisons with Ethiopia, Angola, Egypt or Nigeria whereas in the past that would have been thought as absurd.

And yes, the “pockets of excellence” mostly found in major cities, will slowly shrink over time, but will still be there.

(I can attest to small, rural towns moving closer to 3rd world ideals…most of SA’s small towns….bar the W/Cape…you’d have to make use of good water-filtration system, if you don’t want to experience weird water tastes.)

Ricardian economics suggests that a nation tends to export whatever they are competitive at and imports the rest.

In South Africa, not much has changed in the last 100 years. We’re still exporting whats left of the mineral and agricultural wealth and only during commodity booms, we’ve experienced real growth due to foreign inflows.

And it’s not that we are competitive at these industries anymore, it’s just that we fortunate enough to have resources like few else in the world.

Unfortunately, almost no leadership from government in diversifying the economy and the business environment is generally toxic as to discourage leadership from the private sector to innovate.

The words ‘South Africa’ and ‘globally competitive’ should not be used in the same sentence as they are not going to happen in our lifetimes. Most workers, Government and unions are incapable of seeing the bigger picture and striving for global competiveness. All they see is what can I do to get the most while doing the least over the next 6 months. Long-term planning is non-existent.

A while back I bought a borehole pump set up comprising a 2 kW electric pump, a compressor, and a little motherboard to tell it when to switch on and off for ….R1650 on special from Stewart and Lloyds.

R1650! At our electricity prices you couldn’t smelt the ore for pump for 1650. Our unskilled labour would cost you 6500 to just wind the motor. The motherboard would be out of the question.

We couldn’t put this together for 25K. Never mind the packaging, marketing, shipping, taxes and multiple profit margins before it got to me.

And where did this pump come from? Portugal! Hardly a well known industrial powerhouse.

This is the dead hand of ideology on our economy

The ANC has stolen SA’s economic competitiveness along with the economic future of the people of the nation.