‘The war in Ukraine has had additional implications for the economy,’ German Finance Minister Christian Lindner said.
By Enda Curran and Yuko Takeo, Bloomberg 19 May 2022  12:06 The world economy is increasingly succumbing to the threat of stagflation reminiscent of its 1970s ordeal, a mounting headache for global finance chiefs already navigating the fallout from the war in Ukraine.

With China’s economy slowing sharply, and the Federal Reserve’s stepped-up vow to crush inflation raising worries of a widespread hard landing, warnings of the consequent dangers are intensifying. Group of Seven finance ministers and central bankers, who meet today in Germany, are now indicating outright concern that stagflation can no longer be swerved.

“The war in Ukraine has had additional implications for the economy,” German Finance Minister Christian Lindner, the host of the gathering, told reporters on Thursday as talks began near Bonn. “That means a boost in inflation, coupled with a loss of post-pandemic recovery momentum. That’s why we’ll have to discuss what we can do to avoid stagflation scenarios.”

That followed comments on Wednesday by his US counterpart, Treasury Secretary Janet Yellen that “higher food and energy prices are having stagflationary effects, namely depressing output and spending and raising inflation all around the world.” 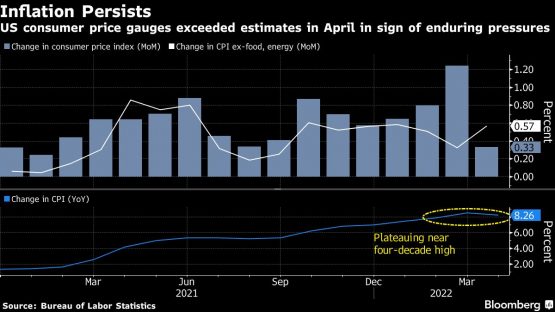 The noxious triple combination of surging inflation, stalling growth and rising unemployment is the worse-case scenario for central bankers and lawmakers, who will have to choose which ailment to fight. Having spent 2021 betting inflation would fade, policy makers are now indicating that prices are their primary concern even if that battle curbs demand and hiring.

While the prospects for a global recession remain low, this year at least, the pace of events is catching policy makers and investors off guard as financial markets slump and growth forecasts continue to be revised lower.

The past week laid bare the scale of the slowdown as China’s data for April showed consumer and business activity hit a wall amid the government’s aggressive covid-zero policy. Japan, the world’s No.3 economy, shrank in the first quarter as soaring import costs inflated by a weaker yen weighed on trade and virus restrictions hit consumers. 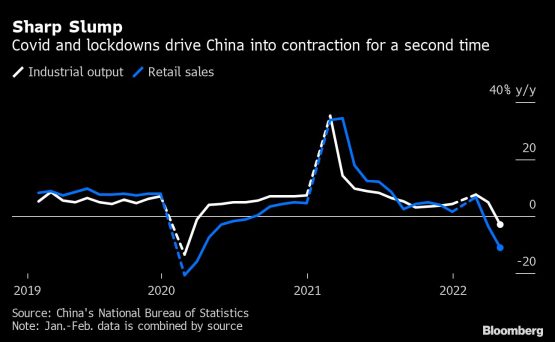 In the US, Fed Chairman Jerome Powell said he would keep raising rates until there is “clear and convincing” evidence that inflation is in retreat. Meanwhile UK price growth hit a 40-year high, and Bank of England Governor Andrew Bailey warned a surge in food costs could have “apocalyptic” consequences for globally.

The alarm hammered markets. The S&P 500 Index slid 4% on Wednesday, its biggest one-day loss since 2020. Its 17% year-to-date decline is the worst start to any year since at least the 1940s.

“We’ve been warning of a pincer movement between Fed hawkishness and Eurasian recession,” said Freya Beamish, head of macro research at TS Lombard, using Eurasia as a reference to Asia and Europe. “This pincer means stagflation for Eurasia until the Fed is satisfied that US inflation is under control, which likely means US recession next year, with inflation still high.”

The biggest shock is coming from China, where analysts continue to downgrade their outlooks. Standard Chartered Plc, Goldman Sachs Group Inc. and Citigroup Inc. all cut growth forecasts this week, as did Bloomberg Economics which now forecast growth of just 2% for the year, down from 3.6%.

Matthews portfolio manager Teresa Kong said the slump in China’s manufacturing in particular is a clear warning. “This does not bode well for the rest of the world’s GDP,” she said. “After the sharp expansion in 2021, if economic growth of an economy registered two consecutive quarters of slightly negative sequential growth, which looks likely in several economies, but with year-on-year growth being healthily positive, is that a hard landing?” Jen said. In past downturns the world moved in sync, led by the US, which dictated the pace of downturn or recovery, he noted.

Current data may also mark a global trough given inflation should slow in the second half and China’s economy will stabilize, said Sayuri Shirai, professor at Keio University and a former Bank of Japan board member.

“Economic growth is clearly slowing down,” she said. “But I think the prospects for the whole world sliding into stagflation, at this stage, is not very high.”

Christine Lagarde, the European Central Bank president, offered similar analysis for the euro zone earlier this month. She insisted in an interview with a Slovenian newspaper that “stagflation isn’t our baseline scenario” and that “the current situation can’t be compared to that of the 1970s.”

By contrast, others reckon it’s already too late to avert that outcome. Mohamed El-Erian, the chair of Gramercy Fund Management, a former chief executive officer of Pimco and a contributor to Bloomberg Opinion, gave Bloomberg Television a gloomy outlook for the US.