Stocks in Asia climbed Wednesday following a rally in US shares as investors assess the resilience of the global economy and hawkish comments from Federal Reserve Chair Jerome Powell.

MSCI Inc.’s Asia-Pacific equity index rose for a fourth day, the longest such streak since February. US futures dipped and European contracts ticked up after the S&P 500 added 2% in a risk rebound Tuesday.

Chinese stocks were whipsawed by the nation’s Covid outbreak, pledges to ease up on a clampdown on technology giants and data showing sliding home prices. But they eventually traded little changed.

Treasuries largely held an overnight slide, with the US 10-year yield just under 3%. Bonds came under pressure after Powell said the Fed “won’t hesitate” to tighten policy beyond neutral to curb high inflation. The dollar was steady. 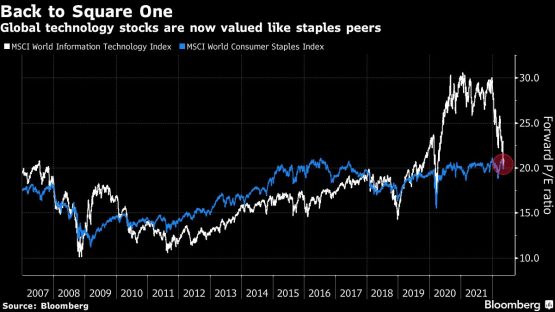 “We’ll have this kind of volatility as people jump in and look at opportunities to buy as markets decline,” Shana Sissel, director of investments at Cope Corrales, said on Bloomberg Television, referring to the Wall Street bounce. The Fed is going to struggle to achieve a soft economic landing, she added.

Powell said that the US central bank will raise interest rates until there is “clear and convincing” evidence that inflation is in retreat. The remarks at a Wall Street Journal live event were some of his most hawkish so far.

Chicago Fed President Charles Evans said he expects the Fed to slow the pace of rate increases to 25 basis-point increments later this year. He anticipates it will complete any 50 basis-point hikes before December.

“This is one of the most challenging markets I have been in in my career,” Henry Peabody, fixed income portfolio manager at MFS Investment Management, said on Bloomberg Television. “I suspect at a certain point of time we’re going to have the liquidity of the markets challenged. They really haven’t been thus far.”

Elsewhere, the Biden administration is poised to fully block Russia’s ability to pay US bondholders after a deadline expires next week, a move that could bring Moscow closer to the brink of default.