Stocks slid Tuesday on intensifying tension between the West and Russia over Ukraine, a standoff that’s bolstering oil prices and leading investors to seek the relative safety of sovereign bonds and bullion.

An Asia-Pacific share gauge fell toward its lowest level this month, including sharp declines in Hong Kong, where Chinese technology firms dropped and Russia-based aluminum producer United Co. Rusal International PJSC sank the most since 2018.

European equity futures shed about 1%. US contracts pointed to a lower Wall Street open when trading resumes after a holiday. Treasuries climbed, taking the US 10-year yield below 1.90%. The dollar was steady and gold — the traditional haven during upheavals — held gains.

Western leaders condemned the latest moves and the US prepared to announce new sanctions against Russia. The US has warned of a possible Russian invasion of Ukraine, a claim the Kremlin has repeatedly rejected. 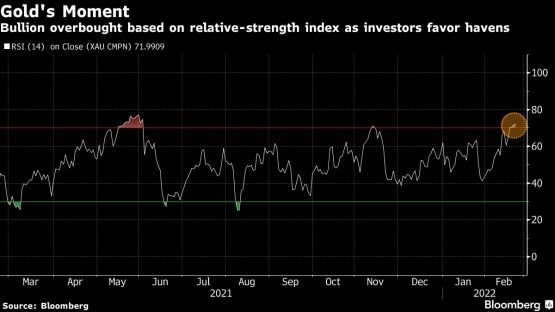 Oil, nickel and aluminum jumped as traders weighed the risk of disruptions to supplies of commodities if the situation deteriorates.

The unfolding security crisis in eastern Europe saddles global markets with the one thing they most dislike — a large amount of uncertainty. Geopolitical risks have already led investors to pare back bets on how aggressively the Federal Reserve may tighten monetary policy this year to fight inflation.

“It’s very difficult to assess risk-rewards in the current environment,” said Damien McColough, head of fixed income research at Westpac Banking Corp. “The Putin recognition of the separatists has added a new dimension that gets us even more concerned that an invasion will happen.”

Elsewhere, Alibaba Group Holding Ltd. retreated in Hong Kong. That came after Chinese authorities told the nation’s biggest state-owned firms and banks to start a fresh round of checks on their financial exposure and other links to Ant Group Co., renewing scrutiny of billionaire Jack Ma’s financial empire.

An index of Chinese tech firms tumbled on concerns of fresh regulatory curbs from Beijing.

Investors are also continuing to monitor commentary on the US monetary-policy path. Fed Governor Michelle Bowman suggested that a half percentage-point increase in interest rates could be on the table next month if incoming readings on inflation come in too high.

But the Ukraine crisis is overshadowing all else in markets for the moment. The ruble tumbled the most since March 2020 after Putin recognized the self-declared separatist republics.

“The stock market is right to be concerned about current tensions between Russia and Ukraine,” Lori Calvasina, head of US equity strategy at RBC Capital Markets LLC, wrote in a note.

That’s because they “run the risk of exacerbating the challenging inflation backdrop that many investors and companies have expected to improve in the back half of 2022 and present a risk to the margin outlook,” she said.