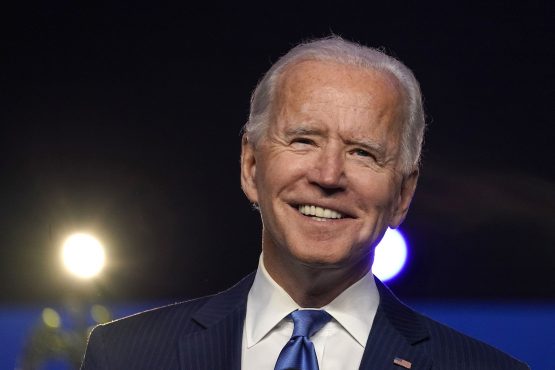 US president elect, Joe Biden. Image: Drew Angerer/Getty Images)
For the global economy, 2020 is ending with a sense of hope for the future, partly built on the assumption that it can’t surely be that bad again.

Such optimism is also founded on the rollout of vaccines to control the coronavirus pandemic. That means a return to some semblance of business-as-usual in the course of 2021 is now less ambitious a prospect than it once was.

But that outcome would arrive too late to save many millions of jobs and the buildup of hundreds of billions of dollars in newly created public debt throughout the world.

What began as a year clouded by the milder threats of a fractious US presidential election, ongoing trade tensions with China, and a hard deadline for UK relations with the European Union soon became an existential ordeal to salvage any economic growth at all amid unprecedented lockdowns.

Here’s a selection of charts with a final look at the havoc and ruin wreaked by Covid-19 during an extraordinary 12 months for the world.

The pace of recovery in the world’s advanced economies remains below pre-crisis levels, according to the OECD’s Composite Leading Indicators, which tend to precede economic turning points by about six months.

Throughout the world, economic policy makers shifted into emergency mode. Central banks cut interest rates to new lows in a bid to loosen monetary conditions, or held them at ultra-loose levels below zero.

The unprecedented spending by governments to cushion the fallout from lockdowns pushed up public borrowing throughout the world. For some countries, debt levels are now at the highest in decades.

For all their efforts, governments couldn’t protect every job, and unemployment rates have risen compared with the start of the year. With some sectors such as tourism and airlines facing long-term change, many jobs may be lost forever, raising the prospect of longer-term economic scarring.

The crisis has proven a setback for righting inequality. Migrant workers bore a heavy burden as many of their jobs were vulnerable, and they often also faced greater health risks working on the front-lines of the pandemic.

Still, remittances proved more resilient than expected. Cash transfers from immigrants in the US to family in Latin America are on track to roughly equal the 2019 total, far better than the World Bank’s prediction in April for a drop.

Despite fears in April of a deeper collapse in international trade flows than at any point in the postwar era, the decline in 2020 turned out broadly similar to that seen during the global financial crisis. In part, this reflects the sharp fall in consumer demand in services where trade intensity is low, according to the OECD.

Joe Biden’s election victory in November may also help trade, if he dials back the “America First” policy the US pursued over the past four years. That might help avert an outright reversal in globalisation, an outcome that Bloomberg Economics calculates would reduce global gross domestic product by $31 trillion by 2050.

For all the setbacks of 2020, progress occurred on one front at least. Women broke new ground in wielding the reins of economic power, with both the US and Canada picking female finance ministers for the first time. Janet Yellen will now take up her role as Treasury Secretary in 2021.

40 years in the senate, never done a days work in his life.

I have a picture of him sitting with Mugabe, big smiles all round.

Margaret Thatcher spoke well of Robert Mugabe.
What does that say about her?
Was she not phenomenal in her pursuits? (Rhetorical)
Calm down!

Whatever she was… she was great! If only we had more economists like her.

Expect EWC to pick up momentum under the Biden administration

As it stands, the Dems will declare him unfit for office not too long within his Presidency, and walla, enter Kamala Harris, the first US female President .. without being elected by the people

The dems have it all figured out..HKGK

It is good for the rest of the world for Biden or Harris to be presidents so that America loses its “Exceptional” status and their economy stagnates.

If you have cash in America get it out now. You will witness a dollar depreciation like never before because these clowns will just print money and try to spent themselves out of trouble like true socialists !

Lets see if Mr. Biden really cares about Africa or if was all lip service.

He can’t remember what State he is in, or what he had for breakfast…Africa? What Africa?

It is going to be a disastrous 4 years should this gimp actually succeed in his election theft.

It is good that Biden won the presidential race so that the Yanks let the rest of the world live and prosper.

With Mr. Trump as president we would all soon become slaves of the US and very poor.

Trump is still President. Biden is not yet President elect.

Very strong odds that Trump will be continuing into his second term.

Trump gives Zuma a good run for his money.

At least Trump did not steal the SA citizens money like your padre.

Most beautiful wife ever !!

“Worst president ever”? Nope, if it’s the US you’re talking about then you’ll find Warren G. Harding, Ulysses S. Grant, Franklin Pierce, James Buchanan and Zachary Taylor are all tied for this particular title.

Nothing was more nightmarish than witnessing the ANC steal the money dedicated to PPE Procurement and Covid-19 relief.

A crime against humanity

Good riddance. We need to unshackle ourselves from the US dollar.
Trump made middle class america poorer and the 1 % americans richer
including his corrupt friends.

I watched one documentary where it showed the correlation between China getting punished with economic tariffs until the Chinese bank invested into the Oom Trompie’s property funds. Apparently it was a repetitive process.

Oom Trompie was in my opinion helping to destroy Europe also.

As for Africa, Oom Trompie was probably as good as Robert Mugabe was for Zimbabwe.

Covid is the smoke screen. Under Biden(and his picks) the world will fall
AI is taking over- robots currently replace humans. Millions of people across the world will suffer and starve to death
Socialism replaces capitalism, as well as social credit system will control human
New transaction process will control the money flows
Mainstream media support all of this, as they don’t expose the real purpose of all of this

“A sense of hope for the future”
It can’t be that bad again?
Where is this so called “hope”?
Hope for what?
Free mind-controlling drugs maybe?
Absolute mind therapy to justify the totally non-justifiable yet again.
This will not end happily.
This is the first year of the excess body count beginning..