The only question on South African rate cut may be ‘how much?’ The debate around South African interest rates has now moved from whether the central bank will cut, to how much it will cut on Thursday.

Of 21 economists in a Bloomberg survey, 11 predict a 50 basis-point reduction, while the balance expect the rate to be lowered by 25 basis points. Forward-rate agreements show traders have switched from pricing in a less than 50% chance of a 25 basis-point cut three weeks ago to betting on a 100% chance that the central bank will cut by 50 basis points.

With an economy that slumped into a recession even before the coronavirus intensified, South Africa’s inflation-targeting central bank is facing calls to ease policy to support economic growth. The Reserve Bank has repeatedly said that monetary policy alone cannot help South Africa’s economy and has a track record of being cautious when moving down — the last time it cut at consecutive meetings was in 2010.

In addition to the US Federal Reserve cutting its main interest rate twice this month to near zero, emerging-market peers Pakistan, Turkey and Egypt eased by between 75 and 300 basis points this week. 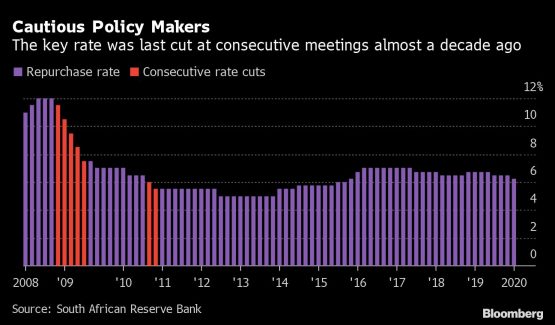 While Governor Lesetja Kganyago ruled out an emergency meeting in response to the virus after the Fed called such a gathering early in March, it is now urgent enough for a 50 basis-point cut, according to PwC economists Lullu Krugel and Christie Viljoen. Two interest rate cuts of 25 basis points each in March and May would suggest the bank is not in panic mode, according to PwC.

“Significant monetary policy easing — combined with faster implementation of economic reforms, as indicated in the budget review 2020 — is required to boost the South African economy,” Krugel and Viljoen said in a note. “This could add 0.3 percentage points to economic growth over the next 12 months. And there is no risk to the inflation outlook from this suggested stimulus.”

Since Kganyago was appointed governor in November 2014, the MPC has made a 50 basis-point move only once, and that was an increase. The last 50 basis-point cut was in July 2012, when inflation was at 5%. That compares with 4.5%, the midpoint of the target range, reported for January. The rate has been at or below that point since December 2018.

President Cyril Ramaphosa said the government is planning fiscal measures to support the economy, but with a budget deficit close to a 30-year high the scope to do so is limited.

To effectively shore up the economy, a rate cut would have to come hand-in-hand with fiscal and health-care stimulus which could be achieved by re-prioritising current spending plans, according to Reezwana Sumad, an analyst at Nedbank Group.

“The reasons for a cut wouldn’t be grounded in fundamentals,” she said. “It would probably be the Reserve Bank reacting to very volatile moves in the market to try and calm down the market.”

The risk of a downgrade to junk by Moody’s Investors Service next week, which would trigger outflows and batter the rand even further, could keep the central bank from cutting more than 50 basis points, according to Mpho Molopyane, an economist at FirstRand Group’s Rand Merchant Bank.

It’s also possible is that the MPC could go back to having monthly meetings, like it did in 2009 during the the global financial crisis, she said. That would give the panel scope to cut by 50 basis points this round and by 25 basis points each in April and May.

“An escalation of the virus outbreak and a drop in oil prices to record lows now gives the Sarb scope to significantly revise its economic and inflation outlook, creating both the space and rationale for further cuts. However, the effectiveness of monetary policy and rand weakness will remain a valid concern.”-Boingotlo Gasealahwe, Africa economists.

We are doing the 3rd so reducing rates won’t help.

More rate cuts and we will see R20 to the dollar guaranteed. With the exchange rate moving from R15 to R20 in a very short period of time must create a massive inflationary effect, if it does not then STATS SA and the ANC is cooking the books on official inflation figures. Myself and many other people i know are starting to question the trustworthiness of figures supplied by the government.