You’d think a world tiptoeing its way out of the coronavirus pandemic might only be good news for governments and economies. Yet the consequent surge in the price of energy, metals and crops is highlighting the strengths of some and the vulnerabilities of others.

Oil has climbed 75% since the start of November as major economies vaccinate their populations and reopen after the pandemic shut down factories and grounded planes. Copper, used in everything from cars to washing machines and wind turbines, is trading at levels last seen a decade ago. Food prices have jumped every month since May. 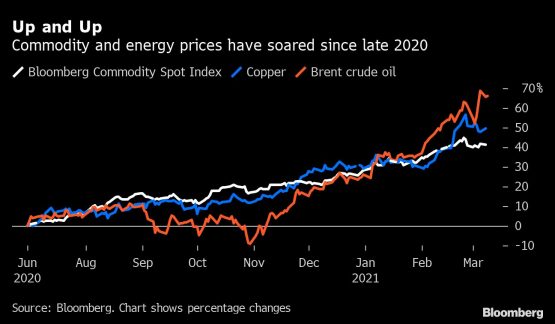 That’s been a boon for exporters. The flood of cash is a welcome relief for energy behemoths such as Saudi Arabia and Russia, whose leaderships have domestic challenges to contend with.

But there are always two sides to a trade. Some countries that depend on imports are feeling the squeeze in bond and currency markets. Rising fuel prices cost the head of Brazil’s state oil company his job. They’ve led India—the world’s third-largest crude importer—to call on the OPEC+ cartel to raise oil production and pushed Turkey’s inflation rate above 15%.

Goldman Sachs Group Inc. and some Wall Street rivals are talking of a new commodities “supercycle.” That’s raising the specter of more damaging inflation down the line—and richer countries aren’t immune, either. The UK government backtracked on raising gasoline tax so as not to rile lockdown-weary drivers. In the US, Texan oil drillers and Corn Belt farmers may be benefiting, though others including tech billionaires are being squeezed. Elon Musk has pleaded with miners to dig up more nickel, a metal he needs to make batteries for Tesla Inc.’s electric vehicles.

Last year’s lockdowns and commodity downturn stung Australia, which experienced its first recession in almost three decades. But the government can expect a windfall in 2021. Sales of iron ore, its top export, hit a record in December, while those of wheat are edging toward the same level and cattle farmers are struggling to keep up with demand for beef.

The Australian dollar has performed better than any other major currency since the end of November, strengthening 5% against the US dollar.

It isn’t all plain sailing. A diplomatic spat has seen China bar Australian goods ranging from coal to copper, wine and lobsters. Still, iron ore has been spared because Beijing can’t source enough of the steel ingredient from elsewhere. That helped ensure the trade fight only cost Australia about $3 billion last year, a small amount for a nation that’s seen its shipments to China balloon from around $5 billion annually at the start of the century to $120 billion. The relative strength of Chile, the world’s biggest copper producer, has also been evident in financial markets. The peso is the only major Latin American currency to appreciate against the dollar over the past three months and Chile’s stock market has been among the world’s most buoyant.

The pandemic caught the country on the back foot. It had just endured months of violent demonstrations over social injustice and rising living costs. The virus then upended global trading and presented the biggest economic challenge to Chile since its return to democracy three decades ago. Copper plunged.

The downturn didn’t last long as Chinese factories fired back up after the Lunar New Year holiday. With prices of the red metal rising above $4 a pound for the first time in about a decade, Chile’s finances are improving. Copper exports stood at $3.9 billion in February, up 42% from the month before.

Similar can be said for Zambia, which relies on copper for almost 80% of export earnings. The country has been desperate for money after it became the first in Africa to default on its Eurobonds following the onset of the pandemic.

President Edgar Lungu faces a re-election battle in August and is trying to get a bailout from the International Monetary Fund, restructure Chinese loans and stem soaring food prices, which have caused inflation to accelerate to 22%.

The country bought the local operations of Glencore Plc in January at what’s looking more and more like a favourable price and global investors have started to become more bullish. Zambia’s dollar debt has rallied the most this year among the roughly 75 emerging markets tracked by Bloomberg Barclays indexes. All petrostates suffered last year, but Iraq stood out. Its economy sank around 11%, more than that of almost any other major oil exporter, according to the International Monetary Fund. The government couldn’t pay teachers and civil servants on time and Iraqis took to the streets to rail against power cuts, dilapidated hospitals, crumbling roads and a lack of jobs.

The situation caused problems for OPEC, of which Iraq is the second-biggest oil producer. Other members, including Saudi Arabia, criticised Baghdad for failing to cut output enough as the cartel tried to bolster prices.

As the crude market picked up, Iraq’s monthly fiscal revenue climbed to $5 billion from about $3 billion in the second quarter of 2020. They’re still far below what’s needed to balance the state budget, but there’s clear respite.

It may be a big producer of everything from oil and zinc to food, but China is also the most important buyer of commodities and was almost single-handedly responsible for the last “supercycle” that ended roughly a decade ago. The rapid recovery of the world’s second-biggest economy from the coronavirus is one of the main reasons energy, metals and agricultural goods are rising this time around.

The rally can only go so far, however, before President Xi Jinping and the Communist Party step in. The topic of food security and pork prices featured prominently during China’s annual parliamentary pageant—the National People’s Congress—this month. The government announced a five-year roadmap to boost crop and livestock production. Millions of people depend on subsidized bread in Egypt. Photographer: Sima Diab/Bloomberg

As the world’s biggest buyer of wheat and a net oil importer, Egypt suffers badly whenever commodity prices pick up. It’s also politically sensitive because millions of people depend on subsidized bread. The Arab Spring uprisings a decade ago were triggered in part by increasing food costs and swept long-standing ruler Hosni Mubarak from power.

So far, President Abdel-Fattah El-Sisi’s government has managed to keep a lid on inflation. Egypt is trying to protect itself against higher oil costs by buying more hedging contracts in the market, and foreign investors are still purchasing local bonds. But gross domestic product will rebound just 2.9% this year, according to a Bloomberg survey of analysts, around half the level expected for the global economy.

The pressure has scarcely eased, however, with Khan only narrowing winning a vote of confidence in parliament this month. The economic impact of business shutdowns and social restrictions to curb the spread of the virus will only be exacerbated if commodities keep climbing and add to the import bill of Pakistan, which produces barely any oil or minerals of its own.

If big countries like Egypt and Pakistan are struggling with the commodities cycle, spare a thought for smaller places on the map. The Dominican Republic may be the largest economy in the Caribbean, but its GDP is barely greater than New Hampshire’s and rising fuel prices are hitting before the key tourism industry has had a chance to recover from the pandemic.

The nation of 11 million people is heavily dependent on imports. Apart from gasoline and diesel for vehicles, it has to ship in natural gas, coal and fuel oil for the bulk of its power generation.

It has responded to previous commodity price booms with food subsidies. That might be difficult this time given its stretched finances. The country’s dollar bonds have lost 9% this year, making it one of the worst-performing emerging markets.