These are the biggest economic risks for 2022 The Covid years are littered with predictions that didn’t work out. For anyone looking ahead into 2022, that should be enough to give pause.

Most forecasters, including Bloomberg Economics, have as their base case a robust recovery with cooling prices and a shift away from emergency monetary-policy settings. What could go wrong? Plenty.

Some things might go better than expected too, of course. Governments may decide to keep fiscal support in place. China’s latest Five Year Plan could catalyse stronger investment. Pandemic savings might fund a global spending splurge.

It’s early for a definite verdict on the omicron variant of Covid-19. Apparently more contagious than its predecessors, it may prove less deadly too. That would help the world get back to something like pre-pandemic normal — which means spending more money on services. Lockdowns and Covid caution have kept people out of gyms or restaurants, for example, and encouraged them to buy more stuff instead. A rebalancing of spending could boost global growth to 5.1% from the Bloomberg Economics base forecast of 4.7%. 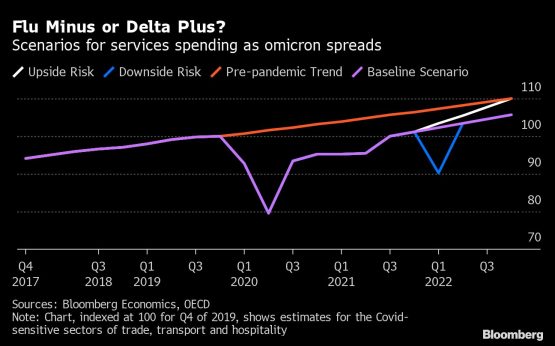 But we may not get that lucky. A more contagious and deadly variant would drag on economies. Even a three-month return to the toughest 2021 restrictions — countries like the UK have already moved in that direction — could see 2022 growth slow to 4.2%. 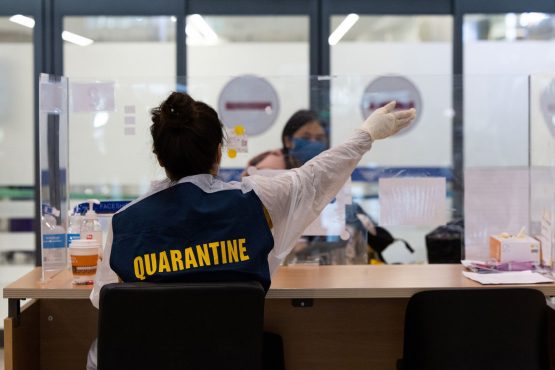 In that scenario, demand would be weaker and the world’s supply problems would likely persist, with workers kept out of labour markets and further logistics snarl-ups. Already this month, the Chinese city of Ningbo — home to one of the world’s busiest ports—  has seen fresh lockdowns.

The threat of inflation

At the start of 2021, the US was forecast to end the year with 2% inflation. Instead it’s close to 7%. In 2022, once again, the consensus expects inflation to end the year close to target levels. Another major miss is possible. Omicron is just one potential cause. Wages, already rising at a rapid clip in the US, could climb higher. Tensions between Russia and Ukraine could  send gas prices surging. With climate change bringing more disruptive weather events, food prices may continue to rise.

Not all the risks are in the same direction. A new wave of the virus could hit travel for example — dragging down oil prices. Even so, the combined impact could still be a stagflationary shock that leaves the Fed and other central banks with no easy answers.

Recent history, from the taper tantrum of 2013 to 2018’s stocks selloff, shows how a tightening Fed spells trouble for markets.

Adding to risks this time around are already-elevated asset prices. The S&P 500 Index is near bubble territory, and home prices accelerating away from rents suggest housing-market risks are bigger than at any time since the sub-prime crisis back in 2007. 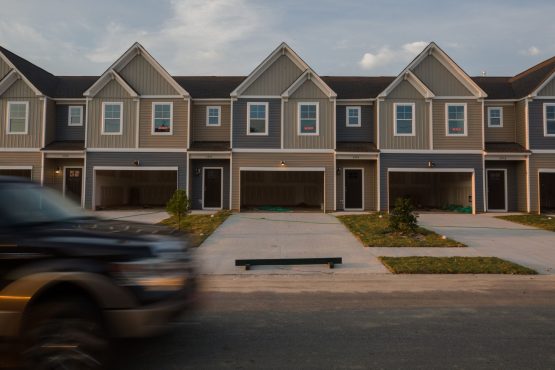 Bloomberg Economics modeled what happens if the Fed delivered three hikes in 2022 and signaled it would keep going until rates reach 2.5%, pushing Treasury yields up and credit spreads wider. The result: a recession at the start of 2023.

Some are more vulnerable than others. In 2013 and 2018 it was Argentina, South Africa and Turkey that suffered most. Add on Brazil and Egypt — call them the BEASTs — to get the list of five at-risk economies in 2022, based on a range of measures compiled by Bloomberg Economics. China could hit a great wall

In the third quarter of 2021, China’s economy ground to a halt. The accumulated weight of the Evergrande real estate slump, repeated Covid lockdowns and energy shortages dragged annualised economic growth down to 0.8% — way below the 6% pace to which the world has become accustomed. 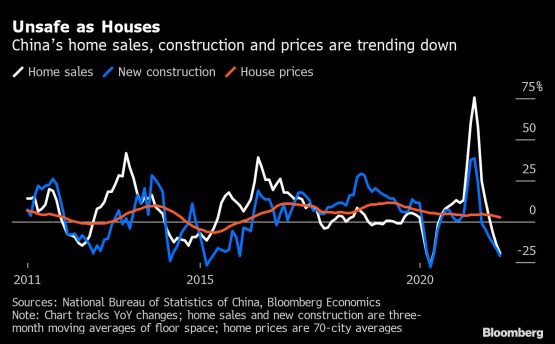 While the energy crunch should ease in 2022, the other two problems may not. Beijing’s zero-Covid strategy could mean omicron lockdowns. And with demand weak and financing constrained, property construction — which drives about 25% of China’s economy — may have further to fall. Bloomberg Economics’ base case is for China to grow 5.7% in 2022. A slowdown to 3% would send ripples around the world, leaving commodity exporters short of buyers and potentially derailing the Fed’s plans, just like the Chinese stocks crash did in 2015.

Solidarity among leaders who back the European project, and European Central Bank activism to keep government borrowing costs under control, helped Europe weather the Covid crisis. In the year ahead, both could fade.

A fight over the Italian presidency in January could upend the fragile coalition in Rome. France heads to the polls in April with President Emmanuel Macron facing challenges from the right. If euro-skeptics gain power in the bloc’s key economies, it could shatter the calm on European bond markets and deprive the ECB of the political support required to respond. 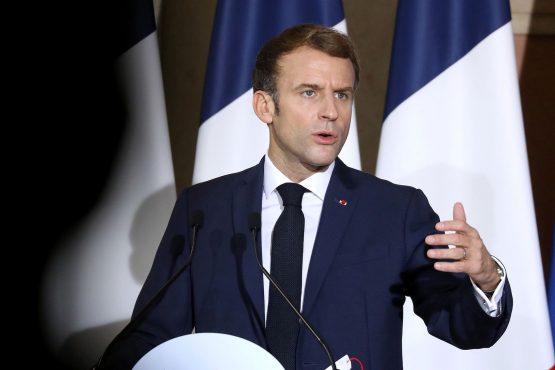 Say that sovereign spreads widen by 300 basis points, like they did in last decade’s debt crisis. Bloomberg Economics model shows that could chop more than 4 percent from economic output by the end of 2022, sending the euro area into recession and reviving concerns about its viability.

Negotiations between the UK and EU over the Northern Ireland Protocol — a doomed attempt to square the circle of an open land border and closed customs union — are set to rumble on into 2022. Getting to yes will be tough.

What happens if negotiations break down? Based on past Brexit flare-ups, the uncertainty would hit business investment and undermine the pound, boosting inflation and eroding real incomes.

In a full-on trade war, tariffs and transportation logjams could push prices even higher.

Governments spent heavily to support workers and businesses in the pandemic. Many now want to tighten their belts. The pull-back of public spending in 2022 will amount to some 2.5% of global GDP, about five times bigger than austerity measures that slowed recoveries after the 2008 crisis, according to UBS estimates. There are exceptions. Japan’s new government has announced another record stimulus and China’s authorities have signaled a shift to supporting the economy after a long stretch of holding the purse strings tight.

In the US, fiscal policy swung from boosting the economy to slowing it in the second quarter of 2021, according to the Brookings Institution. That’s set to continue next year, though President Joe Biden’s child-care and clean-energy investment plans will limit the drag if they make it through Congress.

Hunger is a historic driver of social unrest. A combination of Covid effects and bad weather has pushed world food prices near record highs, and could keep them elevated next year.

The last food-price shock in 2011 triggered a wave of popular protests, especially in the Middle East. Many countries in the region remain exposed. Sudan, Yemen, and Lebanon — already under stress — all look at least as vulnerable today as they did in 2011, and some are more so. Egypt is only marginally better-off. An auction at a fish market in Beirut, Lebanon. Photographer: Francesca Volpi/Bloomberg

Any escalation between mainland China and Taiwan, from blockade to outright invasion, could draw in other world powers — including the US.

A superpower war is the worst case, but scenarios short of that include sanctions that would freeze ties between the world’s two biggest economies, and a collapse in Taiwan’s production of the semiconductors that are crucial to global output of everything from smartphones to cars.

Elsewhere, Brazil is scheduled to hold elections in October — against a backdrop of pandemic turbulence and a still-depressed economy. A lot could go wrong, though a win for a candidate promising tighter control of the public purse could bring some relief to the real.

In Turkey, the opposition is pushing to bring forward 2023 elections into next year amid a currency slump widely blamed on President Recep Tayyip Erdogan’s unorthodox economic policies. Not every risk is to the downside. US budget policy, for example, could remain more expansionary than appears likely right now — keeping the economy away from the brink of the fiscal cliff, and boosting growth.

Globally, households are sitting on trillions of dollars of excess savings, thanks to pandemic stimulus and enforced frugality during lockdown. If that gets spent faster than expected, growth would accelerate. In 2020, pandemic economies were worse than pretty much any economist had forecast. But that wasn’t true in 2021: in many countries, recoveries were surprisingly rapid. That’s a useful reminder that some things could go right next year, too.