In a rare event, all of the main economic sectors contracted in April,
By Andrew Atkinson and Philip Aldrick, Bloomberg  13 Jun 2022  10:03

The UK economy shrank in April at the sharpest pace in more than a year as the government wound down Covid testing, highlighting risks that a broader contraction is under way.

Gross domestic product fell 0.3% from March when output declined 0.1%, the Office for National Statistics said Monday. A gain of 0.1% was predicted by economists.

The economy shrank unexpectedly in April as Covid testing wound down 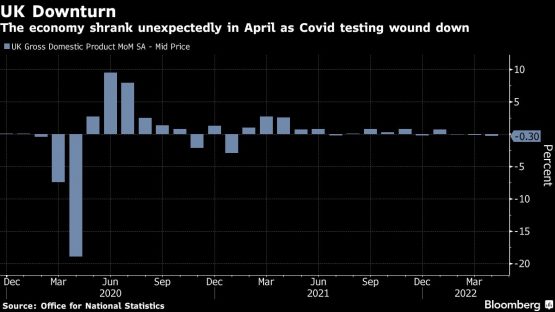 The figures underscore a dimming outlook for the UK economy, with manufacturing, services and construction all contracting together for the first time since January 2021. That may persuade the Bank of England to move cautiously in fighting inflation. It’s expected to deliver a quarter-point rate rise on Thursday.

“The fall in output is unlikely to be short-lived,” said Yael Selfin, chief economist at KPMG UK. “The overall outlook remains downbeat as the squeeze on consumer income is expected to weaken demand.”

“We expect momentum to remain subdued in the following months, with output to decline by a marked 0.4% in the second quarter as the real income squeeze starts to bite. Still, with inflation remaining stubbornly high and a red-hot labor market showing no signs of easing, it won’t be enough to prevent the Bank of England from hiking rates. Given the risks to the economy, a 50 basis point move this week looks highly unlikely — we expect a 25-bp hike, with rates climbing to 2% by November.” –Ana Luis Andrade, Bloomberg Economics.

The pound slid as much as 0.6% to $1.2238, reaching the lowest level in about a month. Some investors reined in bets the BOE will announce a half-point rate increase this week.

The GDP report showed services dropped sharply due to a 5.6% decline in health spending. Test and trace activity fell almost 70% in April. Excluding test and trace and vaccines, the economy would have grown 0.1% in the month, the ONS said. 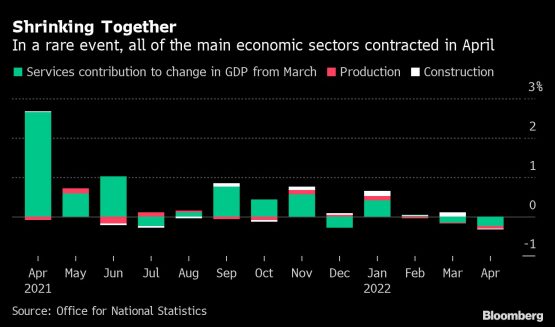 Households showed signs of resilience in April, the month when energy bills jumped 54% and payroll taxes went up. Consumer-facing industries expanded 2.6%, led by a strong rise in retail sales and personal services such as hairdressing.

However, more recent data show households cutting back on non-essentials items in response to the cost of living squeeze.

Manufacturing fell 1%, with businesses reporting the impact of price increases and supply shortages. Construction fell by 0.4%.

An extra bank holiday for the Queen’s Diamond Jubilee means Britain may dodge a technical recession — two consecutive quarter of falling output — but it could come close. April marks the third month in which GDP hasn’t grown, a clear sign that the economy is weakening rapidly in the face of inflationary pressures.

Exports to the EU rose for a third straight month to their highest level on record.

The precarious state of the economy presents a headache for both Bank of England Governor Andrew Bailey and Prime Minister Boris Johnson.

The CBI, Britain’s biggest business lobby group, downgraded its growth forecast for next year to just 1%. It called on the government to boost business investment “to spare the country from dipping into recession.”

With inflation set to peak in double digits in October when energy bills are due to surge again, Bailey and his colleagues have little option but to keep raising interest rates, even if means making the cost of living crisis worse in the short run. They are worried about the risk of a 1970s wage-price spiral unless inflation is brought under control.

“Countries around the world are seeing slowing growth, and the UK is not immune from these challenges,” Chancellor of the Exchequer Rishi Sunak said. “I want to reassure people, we’re fully focused on growing the economy to address the cost of living in the longer term, while supporting families and businesses with the immediate pressures they’re facing.”

For the BOE, a quarter-point move, as forecast, would take the benchmark rate to 1.25%, the highest since 2009. Money markets are now pricing in rates climbing above 3% next year.

For Johnson, who came close to being ousted by his own Conservative Party in a confidence vote last week, rescuing the economy is vital if he’s survive much longer.

A new £15 billion support package to subsidise energy bills will only go so far to help households, who had been on course for the biggest fall in disposable incomes since the 1950s.

Figures this week are expected to confirm surveys showing that retail sales fell in May. Even the housing market, which defied the economic slump during the pandemic, is showing signs of cooling. However, the labor market remains tight and a potent source of inflation, data tomorrow is predicted to show.