UK is closing in on inflation rate with double digits

And other economic highlights from around the world.
By Craig Stirling, Bloomberg 20 Jun 2022  00:01 Image: Getty Images
UK inflation probably reached a new four-decade high above 9% in May, underscoring the challenge for the Bank of England as it threatens faster interest-rate increases in response.

A week after surging US consumer prices prompted an accelerated 75 basis-point hike from the Federal Reserve amid spasms in global financial markets, the British data will offer investors another chance to ask if the reaction of policy makers is adequate.

While the median prediction of economists for inflation on Wednesday anticipates an increase to 9.1%, one estimate — by Natixis SA — suggests an outcome of 10%. The BOE reckons the peak later this year will be “slightly above” 11%. That forecast accompanied the decision last week of officials led by Governor Andrew Bailey to raise the rate for a fifth straight meeting, by a quarter point, and signal that a larger move could transpire if needed to bring inflation under control.

The BOE also warned the economy may be suffering a contraction in the second quarter, analysis that reports this week could help validate. Economists’ forecasts show retail sales probably dropped 0.7% in May, while surveys of purchasing managers are seen revealing further slowing in both manufacturing and services.

Investors will also scrutinize the reaction of policy makers to such data, with at least seven such appearances planned this week including two by Chief Economist Huw Pill. The worsening economic news will feed into the political debate on whether Prime Minister Boris Johnson’s government is doing enough to ease the cost-of-living crisis.

As arguments rage over whether Brexit is to blame, Thursday — the sixth anniversary of Britain’s vote to leave the European Union — will feature two special elections where citizens in districts in the North of England and in the southwest can share their views at the ballot box.

What Bloomberg Economics says:
“Ominously, UK consumer confidence is now below levels seen during the global financial crisis, the Covid-19 lockdowns and recessions in the 1980s and 1990s.”

Elsewhere, testimony by the chiefs of the Fed and the European Central Bank, along with likely further rate hikes from Norway to Mexico and an inflation reading in Japan will keep global financial markets busy.

US economy
In the US, Fed Chair Jerome Powell heads to Capitol Hill on Wednesday and Thursday to deliver the central bank’s monetary policy report to Congress. His testimony follows the biggest increase in the Fed’s benchmark rate since 1994 as officials try to rein in the worst inflation in four decades.

A slew of officials. including Charles Evans, Patrick Harker, Thomas Barkin and James Bullard, are also scheduled to speak at various events around the country. Their comments, along with Powell’s testimony, may help shape forecasts around the size of an anticipated rate hike at the Federal Open Market Committee’s July meeting.

The economic data calendar, meanwhile, is light. A report on sales of previously owned homes is expected to show a further deterioration in demand as mortgage rates spike. Those figures will be followed at the end of the week by new-home sales data. 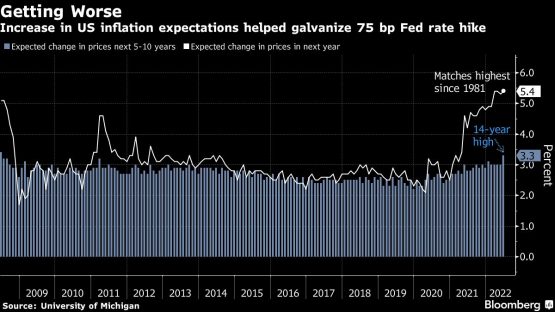 Preliminary June readings of manufacturing and services are due Thursday, while the University of Michigan’s final June sentiment data the following day will show whether a pickup in inflation expectations earlier in the month persisted. Powell acknowledged this week that those figures played a role in the Fed’s decision to boost interest rates by 75 basis points.

Asia
Chinese banks will set their loan prime rate on Monday as pressure grows to provide cheap credit to the faltering economy.

Reserve Bank of Australia Governor Philip Lowe will be speaking Tuesday following a review into Australia’s experiment with yield-curve control.

Central banks in the Philippines and Indonesia meet on Thursday, with the global push to raise borrowing costs front of mind for policy setters.

The Bank of Japan, which stuck to its ultra-easy policy settings on Friday, will be closely watching the national inflation figures at the end of the week, with the data unlikely to show an acceleration as the impact from additional government fuel subsidies kicks in.

Europe, Middle East, Africa
Days after the European Central Bank ordered officials to work faster on cooking up a new crisis-fighting tool, President Christine Lagarde is likely to face questions on progress since the emergency meeting where that heightened urgency was agreed. She will testify at the European Parliament on Monday.

Euro-zone data highlights include the Ifo index of business confidence in Germany on Friday.

Meanwhile in the wake of a round of global tightening led by the Fed, other central banks may draw attention. On Wednesday, Icelandic officials are likely to raise rates again in an attempt to quell Europe’s fastest housing rally.

The same day, the Czech central bank is expected to deliver one last big hike before new management takes over. Economists are divided on whether the increase will be by 100 basis points, or another quarter point even bigger than that.

Forecasters are also wondering if the Norges Bank might accelerate tightening after hiking in increments of 25 basis points so far. There’s speculation that the Norwegians could opt for a half-point increase on Thursday to rein in inflation at a 33-year high.

By contrast, Turkish President Recep Tayyip Erdogan’s recent comments vowing further rate cuts have fueled speculation that the central bank may deliver on that when it meets on Thursday.

The bank has kept rates steady at 14% for the past five months despite inflation that accelerated to a 24-year high of 74% in May.

In Morocco, officials may raise borrowing costs for the first time since 2008 on Tuesday to tackle quickening inflation spurred by a drought and the knock-on effects of Russia’s invasion of Ukraine.

Egypt is also weighing another rate hike on Thursday after making its biggest increase in years to tackle inflation and encourage foreign investment in local debt.

South African data on Wednesday is expected to show inflation breached the 6% ceiling of the central bank’s target band for the first time in more than five years in May. Expectations are building that it will probably raise its key rate on July 21.

Latin America
Argentina will become the last of Latin America’s big economies to report first-quarter output. Analysts expect growth to have slowed from 2021 and look for it to contract in the fourth quarter.

Brazil’s central bank will post the minutes of its June meeting, where it extended a record tightening cycle. The post-decision statement signaled that a 12th straight rate hike was on for its next meeting in early August and noted “risks to its scenarios remain in both directions.”

The mid-month reading of Brazil’s benchmark inflation index may again show the headline figure easing but without much let-up in the core reading now running at a double-digit pace.

In Chile, the central bank will post the minutes of its June meeting where it raised the key rate to a record high 9%, extending its sharpest and longest-ever tightening cycle.

Mid-month consumer price data in Mexico posted early Thursday may cement bets that Banxico will hike by a recored 75 basis points to 7.75% that afternoon. Headline inflation has been above the 3% target for two years — the core rate longer than that — while up north the Fed’s turned very, very hawkish.