December contracts on the S&P 500 and Nasdaq 100 Index rose 0.3% each after a cautious week that saw the benchmark gauge underperform the technology measure. Telecom Italia SpA jumped as much as 30% after KKR & Co. bid for the company. Two- and five-year US government bond yields rose at least two basis points each. The dollar held steady, while oil erased losses.

US stocks are trading near record levels, outpacing the rest of the world, as investors see few alternatives amid rising inflation, bouts of a selloff in bonds and a persistent pandemic that undermines global recovery. Even as sentiment remains on the edge amid expectations for a quicker-than-expected tapering by the Federal Reserve, Monday brought some cheer to traders as China’s central bank dropped language that precluded policy accommodation. 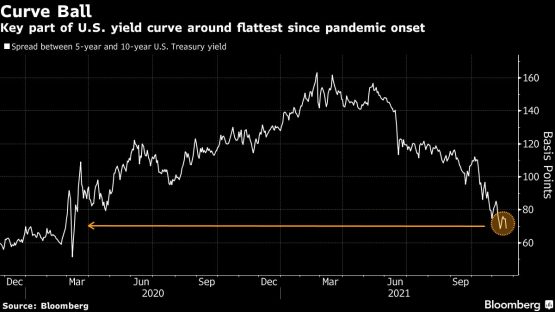 Investors are also focusing on whom President Joe Biden will pick as the Fed chair nominee from Governor Lael Brainard and incumbent Jerome Powell. Whoever is chosen may have their work cut out: US inflation is surging at the fastest pace in decades and expectations for price growth are at the highest since 2013.

A trio of Fed policy makers — Vice Chairman Richard Clarida, Governor Christopher Waller and St. Louis Federal Reserve Bank President James Bullard — have signaled that the topic of a faster taper might be on the table when the Federal Open Market Committee meets in December.

“What we are likely to see this week is more Fed members socialising that idea of a more rapid QE taper,” Jason Schenker, president and chief economist at Prestige Economics, said on Bloomberg Television. “If that idea gets out there and is repeatedly underscored, that will increase the probability that the tapering that’s announced in December will be quicker than the pace that was announced early in November.”

Europe’s Stoxx 600 gauge advanced for the first time in three days as deal activity helped to allay some of the concerns surrounding the spread of Covid-19. Telecommunications shares were the best performing group, with Telecom Italia gaining from private-equity firm KKR’s $12.2 billion bid for the company.

Treasuries were mixed and the gap between yields on five-year and 30-year maturities was around the lowest since March 2020. Risk aversion has bolstered bonds as surging European infections push Austria toward a lockdown and spur Germany to tighten curbs. The curve flattened in part on signs the Fed may consider a faster drawdown of its bond-buying program to fight inflation.