Gordhan’s growth estimates best served with a pinch of salt 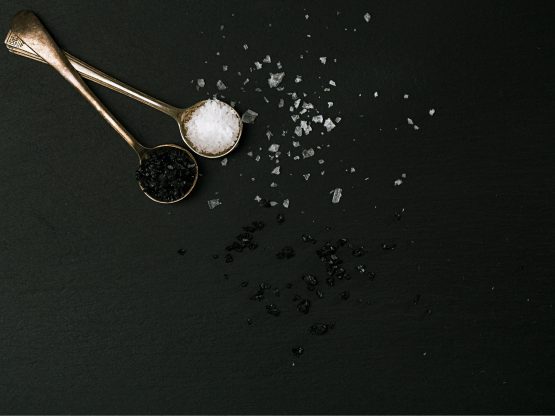 Finance minister Pravin Gordhan said this week that the growth forecast of 1.3% for 2017 might be optimistic, but at least Treasury is transparent about it. The problem is that government growth forecasts are so invariably optimistic that they have become more PR than reality. That said, forecasts are notoriously difficult, and Treasury allows for a margin of error in its budgeting process.

The gap between actual and budgeted growth rates has narrowed in recent years, suggesting more realism in the forecasting process. Global events over which the government has no control can throw out the best of forecasts, as they did in 2009.

Could it be that SA is hitting the upper ceiling of what has become known as the Laffer curve – a theory by US economist Arthur Laffer that increasing taxes beyond a certain point ends up yielding lower collections as income earners resent working for the government? This theory expands on an earlier theory proposed by John Maynard Keynes, and others.

The following graph shows the difference between SA’s actual and budgeted economic growth. In seven of the last eight years, Treasury has overestimated growth, often by as much as a percentage point and in one case (in 2009) by more than 2.5%. This has a material impact on revenue collections, since lower growth translates into lower tax collections. 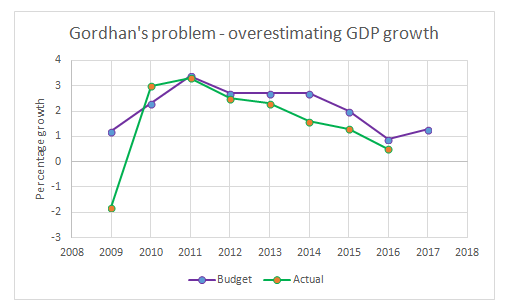 Gordhan seemed to place blame for last year’s revenue shortfall on the South African Revenue Services (Sars). “Sars is the revenue administrator and it must do its work in a manner to support government’s fiscal objectives. I’m only doing my job and hopefully they’ll begin to do their jobs as well,” the minister is reported to have said.

But not everyone sees the revenue shortfall as a failure in tax collection. “Now that government has moved the top marginal tax bracket to 45% for high income earners, this is going to drive these people away, or at the very least force them to look at any possible means of reducing their tax liabilities,” says Ian Cruickshanks, economist at the Institute of Race Relations.

He questions whether government has any further scope for increasing taxes. “Any further increases in taxes will be like getting blood out of a stone. It won’t work.”

Economic growth has been declining for years without interruption, though most economists expect a small turnaround this year, helped in part by good rains that will lift agriculture from its slump, adding between 0.5% and 1% to economic growth. The Department of Agriculture estimates a maize crop of 7.8 million tons for 2017, which is 3.2% more than last year. The size of the crop is already settled, and it is too late to increase plantings.

“The only other factor which could lift economic growth is a sustained recovery in commodity prices such as we saw in the 2000s,” says Cruickshanks.

Gordhan’s budget was generally well received by business, in particular his emphasis on public-private sector partnerships.

In the latest budget, Gordhan promised R85 billion for transport, housing, broadband and bulk water and sewage services. This is well short of the R900 billion promised some years ago, and also well short of the R240 billion the government will spend on basic education in the coming year.

“The money for infrastructure spending is just not there,” says Cruickshanks.

Government will likely face an uphill battle increasing tax collections in an economic climate of low growth or economic stagnation. His focus has shifted to the wealthy. A higher top marginal tax rate for personal income earners, coupled with limited allowance for bracket creep (which is where higher salaries push earners into the next income tax bracket), will net an extra R16.5 billion in the coming fiscal year.

The danger is that Treasury will encounter the limits of the Laffer curve – where raising taxes produces no extra revenue. Government may find it harder to reach its budgeted tax revenues if taxes are raised any higher. The question is: have we reached that limit?

The GDP, she is dead.

Government departments budget only for income. They decide which of the bloated department gets what (inclusive of backhanders and to cover any additional corruption). They don’t give a damn about income budgeting. If the income is not enough, just raise taxes to meet the cost. Evidence of this is shown by their insistence on an NHI and Zuma’s personal insistence on the nuclear energy option.

Problem is no new business or even business growth for the future, the results high unemployment, a bad economy, corruption, tax increases and all that goes with it, and all government is worried about is BEE, radical transformation, and land grab. Why? that’s “all” that keeps them in power, the only “carrot” they can feed the uneducated masses before elections.

This is a well planed action by government, keep the masses hungry and uneducated, and then just promise them a “carrot” for a vote. Problem is that even that “carrot” is starting to become to expensive, and even slowly out of reach.

is it the LAFFER or LAUGHING curve.
the cabal only spends money to line their own pockets or entrench themselves politically.
Business keeps telling them how to do things but they spit in our faces with their BBEEE , corruption and state capture – only the dumb are buying it.
SA will keep spiralling downwards until this is corrected and business is given an environment to thrive in.