Namibia's economy is forecast to contract for the third straight year in 2019 and has partly been dragged down by anemic growth in South Africa. Image: Shutterstock

A shrinking economy and inflation at the lowest level in 14 years would in most countries entice a central bank to cut interest rates. Not in Namibia. 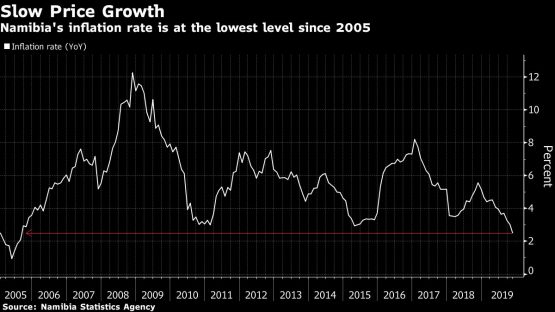 Should the world’s biggest marine-diamond producer cut its rate to less than South Africa, investors could shift funds to benefit from higher returns, making it difficult for Namibia to retain its reserves while defending the currency peg. The central bank kept its key rate at 6.5% this month after the South African Reserve Bank did the same in November. The rates have only been misaligned once since 2015.

The arid nation’s economy is forecast to contract for the third straight year in 2019 and has partly been dragged down by anemic growth in South Africa and power shortages in that country have spilled over into Namibia, which imports electricity. The rand is one of the most-volatile currencies, making planning tough using the pegged Namibian dollar.

Hage Geingob, who was re-elected as Namibia’s president last month, quashed debate earlier this year on the peg. Given the close trade ties to its larger neighbour, Namibia won’t drop the currency link “unless something very drastic happens,” he said.

Most of Namibia’s trade is with South Africa and its companies, such as banks FirstRand Ltd. and Nedbank Group Ltd., are also listed on the Windhoek exchange. Namibia, a country bigger than France by land area but with a population of just 2.6 million people, is part of a currency union with other smaller regional nations Lesotho and Eswatini, the monarchy formerly known as Swaziland.

Plying it safe in case Moodys decides to downgrade.