Who really bears the burden of the stuttering SA economy?

We need a plan to reduce the country’s social welfare needs, or both the rich and the poor will feel the effects.
By Bryden Morton and Chris Blair 4 Nov 2021  11:00 The challenges the South African economy has faced in the aftermath of the lockdowns implemented in response to the Covid pandemic are well documented and have put even more pressure on an already stuttering economy.

In a recent article published by Moneyweb, we unpacked the current youth unemployment crisis and discussed some of the potential knock-on effects that can be caused by having a disproportionately large portion of the youth excluded from participating in the economy – in other words, unemployed.

This article, in a similar manner, will unpack the present state of consumer prices and indicate where the largest burden lies and how this impacts the country not only now, but into the future as well.

At the time of writing, the latest headline inflation rate was 5% (September 2021). Although this is above the levels we experienced last year, it still sits well within the South African Reserve Bank (Sarb) inflation target of between 3% and 6%. On the surface, it appears as if inflation is currently under control and the Sarb is implementing its inflation target with expert precision.

However, scratch a little deeper into how the inflation rate affects the different economic groups (such as rich and poor) and we see a more concerning state of affairs.

The figure below illustrates the inflation rate per expenditure decile. 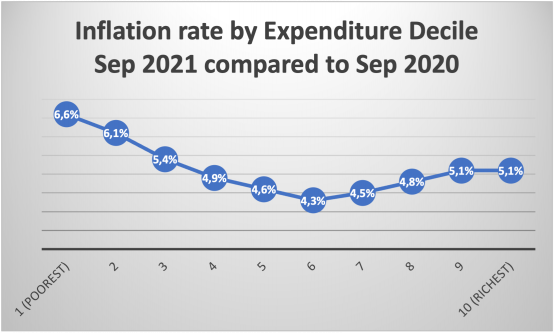 Extending this further, the first three expenditure deciles (or poorest 30%, and where unemployment is highest) are all facing an inflation rate that is appreciably above that reported for the country as whole.

The first two expenditure deciles are currently experiencing an inflation rate that is above the upper limit of Sarb’s inflation target (6%).

This is specifically concerning given South Africa’s high unemployment rate (34.4% in Q2 2021), as this implies that not only are the most marginalised economic groups facing the largest increases in prices, but these groups are also being met with increasingly fewer opportunities to find work to be able to provide for themselves, as shown below.

This illustrates the positive correlation between higher education levels and those more educated individuals’ chances of finding a job.

Ultimately, this will result in a larger burden on the state, as not only will it be required to provide more basic services to an increasing number of unemployed people, these goods and services are becoming increasingly more expensive.

The following table illustrates the current inflation rate for a selection of goods and services that make up a significant portion of the lower income groups’ expenditure items.

The above makes for grim reading as it shows the severity of the negative impact on the purchasing power of the poorest of people in society (given the large portion that food, household fuels/electricity and transport make up of the lowest expenditure deciles’ expenditure).

Not only do many people have less, their basic goods and services cost more.

Answering the question of who is bearing the burden of the stuttering SA economy, unfortunately the evidence points to those who require the most assistance: the poor, the less educated and the youth.

This is unsustainable in the long run as in the absence of uplifting the poorer economic groups and providing them with more access to meaningful opportunities to participate in the economy, the social welfare needs of these groups will grow at a rate that cannot be supported by the current tax base.

This article indicates that presently the brunt of the underperforming economy is being felt by the most marginalised groups.

Those who are fortunate enough to have opportunities to participate need to take heed of the hardship endured by these less fortunate groups.

Unless a plan is made to reduce the country’s social welfare needs (by providing more opportunities to marginalised groups) and increase its tax base, the compounding effect of prolonged years of budget deficits will be felt across the whole economy, rich and poor.

Bryden Morton is executive director and Chris Blair is CEO of 21st Century.

Why, once again, no mention of overpopulation, either through breeding, or immigration( illegal and otherwise), or in SA’s case both!?

We have a cultural problem in Africa when it comes down to this, that needs to be addressed before progress can be made, but it appears to be way to PC to talk about!

When a 2 term President has 21 children, and counting, you know there are never, ever going to be enough opportunities created, if that’s the signal and example given off!

I think, from all the recent news coverage, we know this, but of course, how do we fix it?

The recent elections have demonstrated yet again the cult, if I may use that word of “professional politicians” who are elected for 5 years and are now supposed to fulfil all those grandiose promises, without, for the most part having a clue, other than to call a meeting or set up a commission.

Somehow or other, business has to take control of the economy, businesses that have become international competitors like MTN, Richemont etc and change the same old patterns of society.

South Africa and the SADC region have more assets than we know what to do with in the form of climate, environment, minerals, labour, financial and medical technology, internet and cellular coverage. But what makes the difference between us and the rest of the world is that we have tourism assets which no country or region in the world has and cannot compete with us.

Tourism is a $4 trillion per annum market and here are some facts:

* In 2019, the industry accounted for about seven percent of Africa’s GDP and contributed $169 billion to its economy—about the size of Côte d’Ivoire’s and Kenya’s combined GDP.

So here we have unique assets. From the point of view of developing industries, we have the unassailable advantage that Microsoft had over the rest of the technology industry. They became one of the largest companies in the world. Why aren’t we emulating their business model?

That we are a long haul destination is simply a glitch that can be managed in the same way that smart marketers sell into a new market – with innovation and creativity.

So that’s how we get out of this mess. Tourism does not need highly skilled graduates but rather willing workers. Why do you go back to a restaurant that has pretty much the same quality of food as the rest? The quality of the service.

Our assets in wildlife, environment in respect of seashores, beaches and game parks or simply wide open spaces like the Karoo do not need high tech input but just good regular oversight by willing workers. Our unique selling proposition is what we were gifted by nature. We don’t need to build another Kalahari, Drakensberg, Table Mountain, Wild Coast or KZN coral reefs or Clifton beaches – we got it all for nothing!

We’ve added spectacular game lodges, wine estates, fine dining restaurants, cellular coverage, a wealth of vibrant fine art, music and international standard conference venues. All of which require labour. Not labour with a BCom or MBA degree but simply trainable labour that can and wants to be up skilled.

Surely It’s really not that hard to do?

And that is just one excellent suggestion. But first, SA leaders should start and keep, telling people they are lucky to have a job and need to work hard to keep it.

Then the small stuff, organise waste recovery and recycling, stop the protectionism that enables cartels and open up for small business.