Or face government running out of money to pay its bills sometime in October.
By Tony Czuczka, Bloomberg  20 Sep 2021  08:49 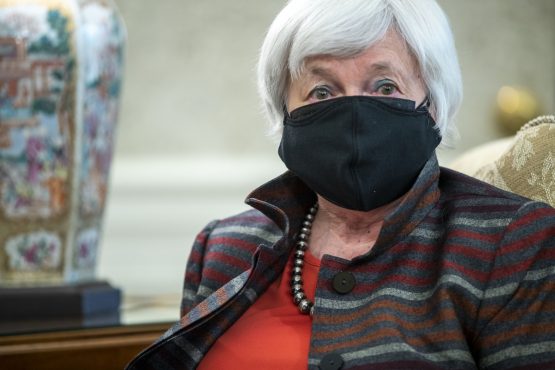 Treasury Secretary Janet Yellen renewed her call for Congress to raise or suspend the US debt ceiling, saying the government will otherwise run out of money to pay its bills sometime in October.

Writing in a Wall Street Journal op-ed, Yellen said “the overwhelming consensus among economists and Treasury officials of both parties is that failing to raise the debt limit would produce widespread economic catastrophe.”

The US House will vote next week on raising the nation’s $28 trillion debt ceiling amid a standoff between Democrats and Republicans that still threatens to send the country into a payments default next month.

A US default “would likely precipitate a historic financial crisis that would compound the damage of the continuing public health emergency,” throw the US into recession and leave it a “permanently weaker nation,” she said.

“Neither delay nor default is tolerable” and lawmakers must act quickly, Yellen added.

Senate Minority Leader Mitch McConnell has rejected an appeal by Yellen for Republicans to join with Democrats in raising the federal debt ceiling, leaving the two sides at odds with potentially weeks to go until the limit is breached.

Each year the ceiling is lifted. Seems like a third-world country to me

Countries around the world are rapped across the knuckles about their Debt to GDP ratios and their lending rates are set accordingly, but the US government debt to GDP is at 133.6% (www.ceicdata.com @ March 2021). They are hardly the paragon of fiscal responsibility and do not deserve their status as reserve currency.