Auto industry could take over a year to recover – TransUnion

Government urged to consider retail auto dealers as a key component in kick-starting other sectors when lockdown is eased.
By Roy Cokayne 24 Apr 2020  00:01 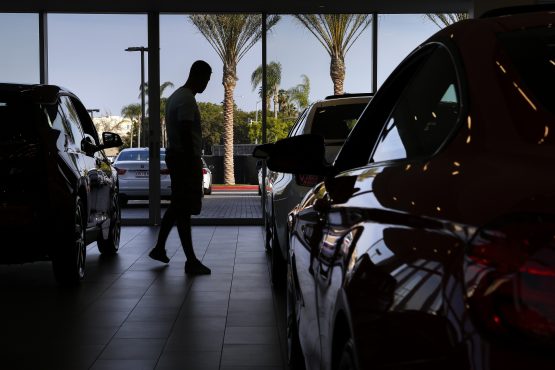 There are around 1 600 vehicle dealers in SA, employing 60 000 people directly, with this increasing to almost one million across the industry. Image: Patrick T Fallon, Bloomberg

The vehicle industry could take a year or more to recover from the Covid-19 pandemic, and the lockdown will impact the way in which consumers and car dealers do business in the future. This is according to TransUnion Auto Information Solutions.

This means there could be an increase in consumers rethinking car-purchasing decisions as they emerge from the lockdown, he said.

His comments coincided with National Automobile Dealers’ Association (Nada) national chair Mark Dommisse urging the government to consider the retail automotive sector as a key component in getting all economic sectors operational, while also applauding and agreeing with the risk-adjusted and phased approach to unlocking economic activity.

Read: Retail motor industry urges to be classified as an essential service

“The motor industry plays a critical role in getting people, products and services to market. It is therefore imperative that dealerships be among the first businesses to commence work when lockdown restrictions are eased,” he said.

Reddy said this is a tough time for car dealers, who must use this opportunity to make changes to remain competitive in a post-pandemic world.

Read: A good year to buy a new set of wheels

He expects to see some creative marketing campaigns post-pandemic to try and ease the pressure.

“The use of payment holidays from the manufacturers may allow consumers to purchase vehicles with no instalment payable for up to six months as they recover from the financial impact of the pandemic, for example,” he said.

Reddy said those who are buying cars are increasingly buying used vehicles.

The report shows an increase in the used-to-new vehicle ratio, with the number of used vehicles sold per new vehicle financed up from 2.09 in Q4 last year to 2.13 in Q1 this year.

“In the used vehicle market, more than 35% of used vehicles are under two years old, with 6% of those being ex-demo models,” said Reddy.

“This indicates that consumers are opting for older vehicles as pressure on disposable income increases.”

Reddy added that the number of vehicles financed in Q1 this year was 12% lower than the same period last year, with the month of March seeing a massive year-on-year decline of 35% for new vehicles and 31% for used vehicles despite new vehicle price increases remaining below the inflation rate for more than two years.

Dommisse said Nada remains committed to contributing and supporting the resurgence of the South African economy within the important safety constraints required to combat the Covid-19 pandemic. He added that this is a sector of the economy that can contribute enormous benefit in the immediate-term – a factor that needs to be seriously considered by government.

He said new vehicle production facilities in South Africa will resume operations as soon as the go-ahead is given, but will require channels in which to distribute the products it assembles.

Exports can’t be the only option

“Limiting demand to export-only is unnecessarily prejudicial to the factories, and domestic consumption driven by Nada members will surely help reduce the pain to OEMs [original equipment manufacturers] and their factory workers.

“Interrupted supply into the local market will cause lost sales, which inevitably will lead to lost jobs,” said Dommisse.

“We are a highly vulnerable industry. Motor retail is right on the edge but if it is saved, and can open quickly, we can bring in revenue both for dealership staff and to the fiscus, which is a win-win for all.”

Dommisse said the roughly 1 600 franchise dealers in South Africa employ 60 000 people directly, but this increases to almost one million in the full automotive industry value chain.

Under the lockdown, these costs remain and are draining cash resources of every dealership, he said.

“Every day this continues means an increase in the number of dealerships that will never open their doors again, and a greater number of retrenchments at dealerships that do open. This will only add to the growing number of jobless people begging the government for support,” he said.

JSE-listed automotive group Motus and distribution group Barloworld both released voluntary trading updates on Thursday that shed light on the impact of the lockdown on their businesses.

Barloworld said the government-imposed lockdowns across the globe continue to negatively impact the environment in which its businesses operate, adding that the latest consensus macroeconomic forecasts indicate that most economies, including South Africa and the rest of Africa, are likely to enter recession in the first half of 2020, with a recovery only commencing in 2021.

“The operating environment is therefore expected to remain weak and volatile in the near term, with significantly lower activity levels in the automotive division,” it said.

Barloworld also confirmed that it had decided to place on hold its previously-disclosed intention to sell 50% of the equity in Avis Fleet.

Motus said it has actively implemented various action plans and is embarking on a number of initiatives focused on achieving the most suitable allocation of capital and preserving cash.

The group said it has sufficient foreign exchange cover in place for Hyundai and Kia until December 31 at an average rate of R14.90 the US dollar and R16.40 to the Euro, while Mitsubishi has sufficient stock up to December 31.

However, Motus said Renault does not have forward cover and the group is relying on pricing and payment assistance from Renault France, which is a 40% shareholder.

“We continue to monitor the situation on a daily basis and we have sufficient well-priced stock of vehicles and parts to trade for the next six months. Based on discussions with the OEMs and suppliers, we are not anticipating significant supply chain disruptions,” it said.

Read: You will soon be able to service your car anywhere

Motus CEO Osman Arbee said the group employs 15 000 people in South Africa, and it will be best placed to save its businesses, jobs and help the government reduce the need for further support packages by returning to work on May 4, 2020.

WesBank Motor CEO Ghana Msibi said it is crucial that the dealer retail market swings into gear as soon as possible because dealers are a critical enabler in the automotive value chain.

Super Group Automotive CEO Graeme Watson said its staff rely on a considerable element of incentive-based earnings and a further extended lockdown period will have a dramatic effect on their livelihoods and no doubt result in significant redundancies.

“This, together with our large fixed overheads and cash consumption during a prolonged lockdown period, will materially affect the future viability of many of our dealerships and the retail motor industry as a whole,” he said.

Unitrans Automotive Group CEO Brynn Stephenson said the majority of its 6 000 staff earn a significant portion of their salaries on commission-based structures.

“Earning a basic salary, if paid without any commission, is in no way a sufficient income,” he said. “With no turnover in our dealerships, cash reserves will soon be depleted resulting in the frightening prospect of a complete business restructure.”

Some industries are more deserving of the gutter than others.

CMH is definitely not an exception.

Are any of the dealers considering online sales like Tesla does. Changing the sales model so that the number of people exposed to one another decreases?

Many online business and work remote can go ahead?

BMW already has gone to online ordering in SA.

The limitation to selling cars will not be how close you can stand to the salesman after a couple of weeks. Try and think a bit bigger and a bit longer term. Congrats for thinking of remote work though! I am sure top minds are considering your proposal!

The motor industry has been ripping SA for a very long time off the back of the never ceasing and excessive import duties. They should just change their business model, while the govt reduces the import duty on cars.

It’s a question of who gives them the subsidy. In SA it is the buyer via Import Duties. Elsewhere it is usually taxpayers in general as US states, Eastern European countries etc. compete to see who can give the biggest tax breaks and deals for a new facotry.