State-run logistics and port operator Transnet has been hit by an apparent cyber hack, with its IT system, several of its websites and its vital Navis container terminal operating system offline on Thursday morning.

Moneyweb was alerted to the issue by concerned freight industry insiders, who complained about trucks not being able to access container terminals at some ports.

Transnet Group issued a statement later on Thursday confirming that it is “experiencing disruption on its IT network”, however, it made no mention of whether this was related to a cyber-attack.

A letter to clients on Thursday morning from the Transnet Freight Rail (TFR) division, seen by Moneyweb, states that “Transnet is currently experiencing a problem with some of its IT applications”.

“We have had to shut them [the IT applications] down to identify the source of the problem.”

“We have activated our business continuity plans in order to contain any adverse impact on operations,” the letter adds.

“We are working to reduce the downtimes to ensure that the systems are up and running again as soon as possible,” it further notes. 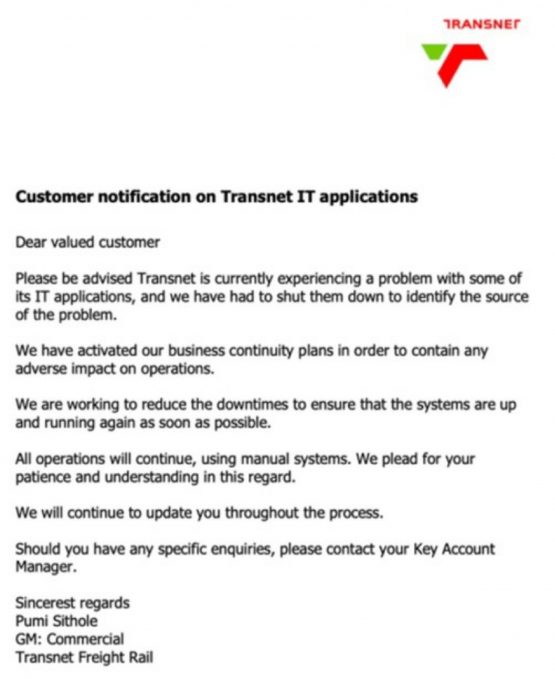 The full extent of the IT disruption unclear. Moneyweb could not access the group’s website as well as the websites of several of its divisions, including TFR and Transnet Port Terminals (TPT) on Thursday.

TPT sent a similar letter to clients on Thursday morning as TFR.

The IT outage could not have come at a worse time for Transnet, after last week’s riots and unrest in KwaZulu-Natal and parts of Gauteng, which brought some of its operations to a halt.

Operations have since restarted, but the IT issue is affecting some of its operations.

“Transnet Ltd SOC is currently experiencing a disruption in some of its IT applications, and the source of this problem is being identified,” the group said in a statement sent via Whatapp to Moneyweb.

“All business continuity plans have been activated. Operations across the group are continuing, with the Freight Rail, Pipelines, Engineering and Property divisions reporting normal activity,” it added.

“Port terminals [TPT] are operational across the system, with the exception of container terminals, as the NAVIS system on the trucking side has been affected,” Transnet however, pointed out.

“In the Eastern Cape, terminal operations have been halted due to inclement weather conditions, and will continue manually once it is safe to do so,” it said.

“The Ports Authority continues to operate, and vessels moving in and out of the ports are being recorded manually. Customers have been made aware of the disruption and are being engaged throughout the process,” Transnet said.

“Work is underway to reduce the downtime to ensure that the impacted systems are up and running again as soon as possible,” it reiterated.

It’s a Circus, like the rest of the show!

One wonders whether it is an inside job and Portnet are scrambling to get the Bitcoin together to pay the ransom OR if they haven’t paid the Service Provider and he has switched them off until the payment has cleared into his account!! Just saying.

The SOE’s are sitting ducks. SITA has got so many compromised systems out there. DOHA has 420 sites that they cannot keep online for 12 hours. Other government departments are not much better.

Sure bro…refusing to pay your software license and getting cut off is not the same as “getting hacked”.

Officejonny, check the official report, no mention of Cyber attack. One never knows the truth with these SOE’s , ask me I have personal experience of it every day, so do you if you not off the grid!

“Moneyweb could not access the group’s website as well as the websites of several of its divisions, including TFR and Transnet Port Terminals (TPT) on Thursday.”

It is time the US or somebody gets together a way to strike hard against cyber-attacks. I’d have no problem with a physical attack. It is economic terrorism but also these hackers are going to mess with something life-threatening soon. Imagine an air traffic control system or such.

Glad to see that you won’t have a problem with it. After all, your opinion is really the most important consideration in starting wars. How is that armchair?

Armchair is comfortable in front of the fireplace, thank you for your concern.

Would you have a problem with a SEAL team taking out cyber terrorists or do you prefer your perch on the fence to an arm chair?

If a take-out starts your war then obviously a state is sponsoring cyber-warfare and an overwhelming physical response usually results in the shortest war. Historically in any event.

You know you grew up in the ou dae when your vision of a kuber attack is some guy behind a computer. Good luck with your tactikal kommandos against a distributed global network.

If a DJ and a few nobodies could stage an “insurrection” in KZN then this “cyber-hack” was probably perpetrated by a tow-truck driver with an old Nokia phone.

Who uses the term “cyber hack”.

“State-run logistics and port operator Transnet has been hit by an apparent cyber hack, with its IT system, several of its websites and its vital Navis container terminal operating system offline on Thursday morning.”

The operating of machinery is placed at avoidable risk if it can in any way be accessed by unauthorised persons. There is no internet connection that can be guaranteed to meet this basic requirement. Such connections are in any case never necessary. It is when IT authority exceeds its legal limitations and makes internet connections to machinery operating systems possible that there is unlawful exercising of control over machinery. In cases of consequential death or serious injury to person(s) the law defaults in such cases to holding the most senior person responsible. Uneducated persons that accept responsibility and still fail to adequately inform themselves, or choose to disregard the related legal requirements, are a risk to others and themselves. This new style of managerial arrogance and stupidity is being permitted by the neutering of the enforcement of the related safety legislation by the same sort of overbearing arrogance and stupidity.

All going according to plan:

Imagine been so self important that you think a back-water’s little unproductive port’s website going down is a globalist campaign.

imagine being so self-assured that there are never any nefarious plans and everything is just a coincidence. I bet you still believe covid came from bat soup and cloth masks protect you from a virus.

Don’t they have “down time procedure”?