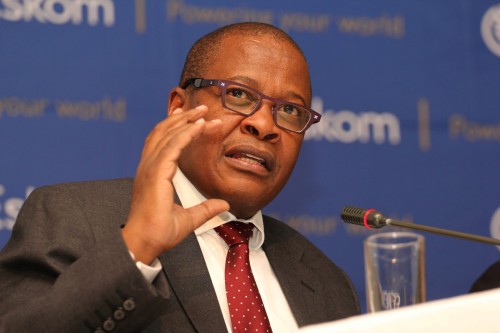 In five years South Africa might have a surplus of electricity generation capacity, which it can export to neighbouring countries, Eskom CEO Brian Molefe said at the utility’s quarterly State of the System briefing in Cape Town.

“One can never have too much power in Southern Africa,” Molefe said.

Molefe said Eskom is currently exporting electricity to its neighbouring countries during the day, when it has excess capacity, but stops exporting during the evening peak.

The utility is however adding generation capacity to the grid and by the end of the year it should be ‘comfortable’. In another five years, it should have more than it needs and be able to ramp up exports to earn revenue for South Africa. “In future we would hopefully be able to build power stations outside South Africa and supply electricity to Africa,” he said.

He said South Africa should build more transmission lines that are bigger and better, in order to sell electricity outside its borders.

Asked about the lead time of at least ten years for the construction of nuclear power stations, he said: “The sooner the clock starts ticking the better.”

Molefe’s comments come as vendors await the publication of a request for proposals (RFP) by the Department of Energy for the country’s nuclear new build programme. The country’s 2010 Integrated Resources Plan included a determination for 9 600 MW of new nuclear generation capacity.

The RFP was expected by the end of March, but has not been published amid concern about the affordability of nuclear construction.

Molefe pointed out that large-scale nuclear power stations are not the only available option. He said mini-reactors can be completed much faster and will be more affordable.

Molefe said South Africa is a leader in the development of the pebble bed modular reactor and Eskom owns the intellectual property rights of the project.

He said Eskom has decided to revive the pebble bed research unit under its Chief Nuclear Officer.

The Pebble Bed Modular Reactor company was established around the turn of the century and the South African government invested more than R7 billion in it before deciding in 2010 to ‘cut its losses’ and stop funding.

It was initially envisaged that Eskom would be the anchor client with prospects of ordering 24 units. The first demonstration unit would have been constructed at Koeberg.

Former public enterprises minister Barbara Hogan at the time said while there was absolutely no doubt about the validity of the project, it became increasingly clear between 2005 and 2009 that the “potential investor and customer market was severely restricted” and it was unable to get either.

Brian Molefe at huge cost to the taxpayer, only oversaw the finalisation of the adding to the power grid the suits of years of work by Eskom employees at huge cost to the taxpayer, and now he is held up as the only bright spark hero left in the ANC’s top structures. But watch him closely. He was the pit bull that kept wanting huge chunks from the taxpayers wallets, and had lots to say when he could not get huge above inflation percentage increases in tariffs which Eskom would have transferred into bonuses for Molefe and his team of pitfalls at the top of Eskom.

We now need accountability for the money being earned from selling the excess power to our fellow Southern African countries that Eskom supplies to, and what they pay compared to South Africans?

Do they pay for that exported power? If so what does Zim pay with???

These fools are tinkering with very risky and exorbitantly costly technology. Don’t they read the latest literature?

Delusions of grandeur.
I can see this costing the taxpayer – what do they care!!

Hilarious…! Molefe et al are conveniently avoiding the elephant in the room. The reason we have export capacity during the day is because SA’s manufacturing sector has been decimated and demand has fallen away, as clearly evidenced by our near-to-zero growth rate and a 45% real unemployment rate. SA Inc is firing on two cyclinders! So now Eskom will no doubt be paying eye-watering bonuses to the architects of their ingenious plan to export surplus capacity at Cents/kw instead of this excess power being used to rebuild our economy and putting people back to work. Also, ‘installed capacity’ is a meaningless number unless it’s moderated by ‘available capacity’ which has historically hovered around 60% due to planned and unplanned outages. Notably, the silence around these issues is deafening.

I heard Brian Molefe do an interview in Afrikaans last night on RSG. He spoke beautifully!

surplus is not the issue Molefe but maintenance of this ” surplus “…maintenance my man MAINTENANCE!

Antoinette, what about the other side of the coin? Everything is said from Eskom’s perspective. More balanced reporting would be appreciated.
Do you know that Germany gave away the pebble bed technology? – why are we enthusiastically adopting it?
No mention is made of the poor state of electricity distribution in South Africa – this problem has not been addressed at all by Eskom to date. All eyes are on generation which they’ve royally messed up.

Nuclear colonialism of the worst order. Now Molefe wants to export toxic waste power to nations which can scarcely afford it.

I can hardly believe what I’m reading here. Pebble Bed reactors have been dumped as being unworkable and billions have been lost in this business.

Grand Inga has been a political disaster and no resolution is in sight.

He wants to export power to Africa? Mozambique is awash with gas, Angola with oil and why should Namibia buy from us when Angola is next door?

Everyone knows the only reason ESKOM has some power to sell is because of the collapse of the local manufacturing industry.

The rat I’m smelling here is the Russian orchestrated nuclear power and the insider deals that this new corruption will fester.

These neighboring countries have given up on SA as being a reliable supplier of electrical power. They are moving away. This market is becoming not available.

Brian wants to freely use the State’s billions for developing nuclear power stations and talks about the ‘clock..ticking’. That phrase worries me:what’s the rush if even now he’s talking about exporting electricity to the rest of Africa?

This is getting scary! If the Sunday Times is correct Molefe will soon be replacing Gordhan and associates. This means Zuma’s capture of treasury will be complete with a nuclear supporter in charge! Good luck with those downgrades South Africa.